Down to Montrose to get Snow Buntings

Chance Meet-up with Emil While Searching for Buntings

Most mornings Karen and I wake up and ask each other, “Well, where should we go birding today?”  Then Karen fires up eBird and looks at the recent checklists to see what was reported.  For the past few days several people reported Snow Buntings at Montrose Point, so off we went on a wild bunting chase.

If you’ve never seen a Snow Bunting I must say they are about the cutest birds around.  They look like parakeets, with cute little bills, but are colored in cinnamon and white.  They spend the summer in the most northerly reaches of Canada and then winter as far south as Chicago – in fact if you drew a horizontal line starting in Nevada, through Chicago, and out to Virginia you would define the southern reach of their wintering grounds.  It gets cold in some of those places in the winter, but Snow Buntings are used to harsh weather.  During breeding season (March – August) the males have pure white heads and breasts with some black on their wings (females have some brown mixed with the black on the wings and a touch of gray on their heads).  By the time they reach Chicago they are in their non-breeding plumage and are striking to see – that’s why we went down to Montrose to find them!

When we walked onto the beach we spotted fellow GBP member Emil Baumbach already there, his camera setup on a tripod.  He introduced us to his friend Russ, who also had his camera on a tripod.  They confirmed that the Snow Buntings were in the area and, in fact, their cameras were pointed to where they hoped they would land.  The spot they pointed to was an odd one; a bulldozer had plowed up piles of sand along the beach about 6 foot high and their cameras were pointed at the ridge of this artificial dune.  Emil explained that the bulldozer also scraped up some of the seaweed that had washed up on the beach and the Snow Buntings like to land on the ridges and forage for food in the sand and vegetation.

It wasn’t long until that’s exactly what happened – four Snow Buntings flew onto the man-made dune and started hopping along the ridge.  Emil suggested I get closer for some shots but I turned to his friend Russ to see if he would be upset if I unintentionally flushed them away.  He replied, “No, I’ve got about 1,000 shots of them so far.”  So off I went.  As you can see, the buntings actually preferred the higher spots of the dune for feeding.  Look closely at the background and you’ll see some of the high-rises along Lake Shore Drive. 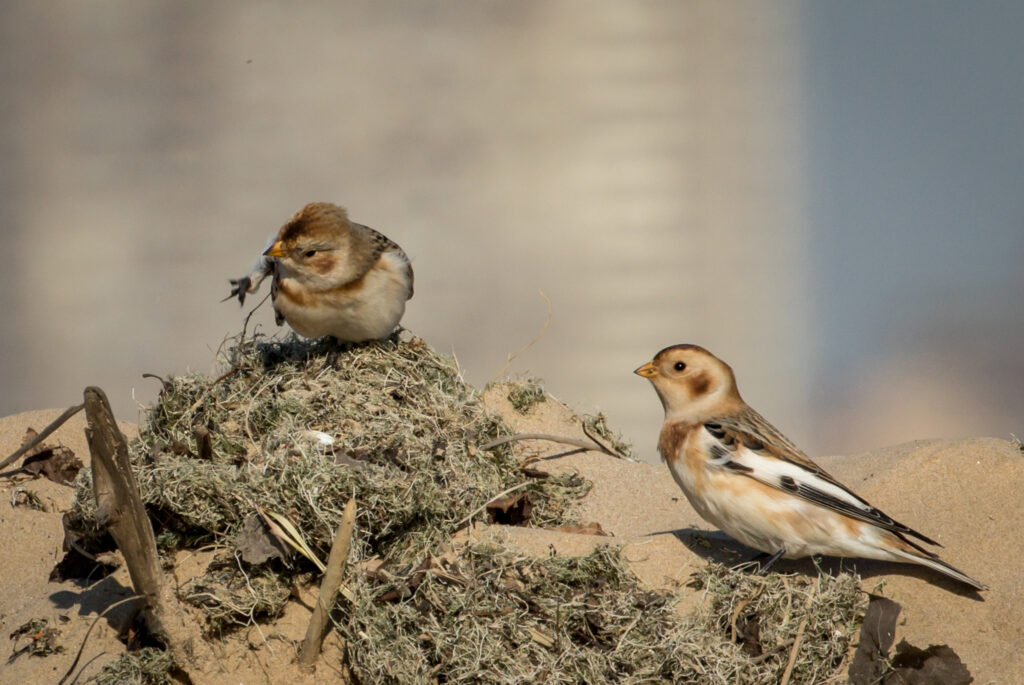 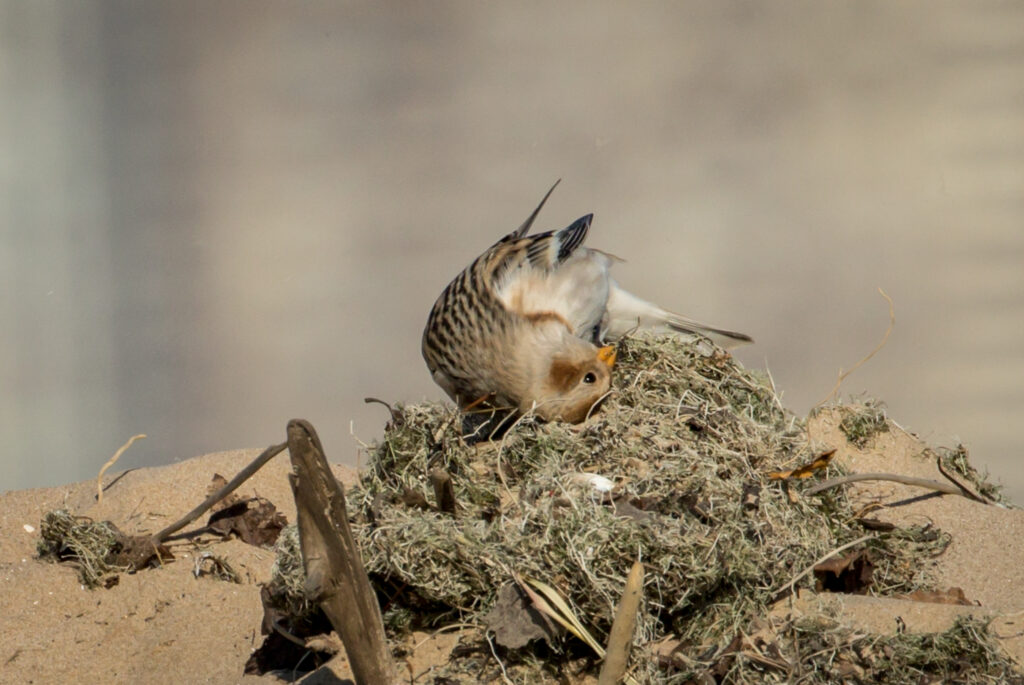 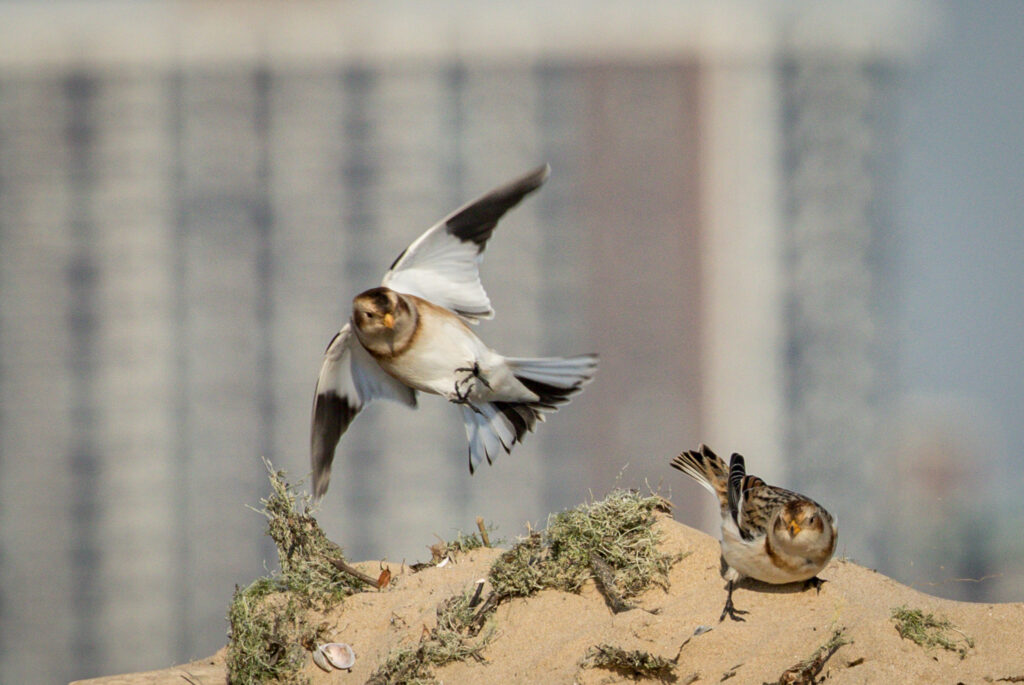 Emil said he wanted a shot of one of the Snow Buntings at the top of the dune with the blue sky and lake behind – like the one of his I posted yesterday.  He posted another shot of one I thought I was pretty good: 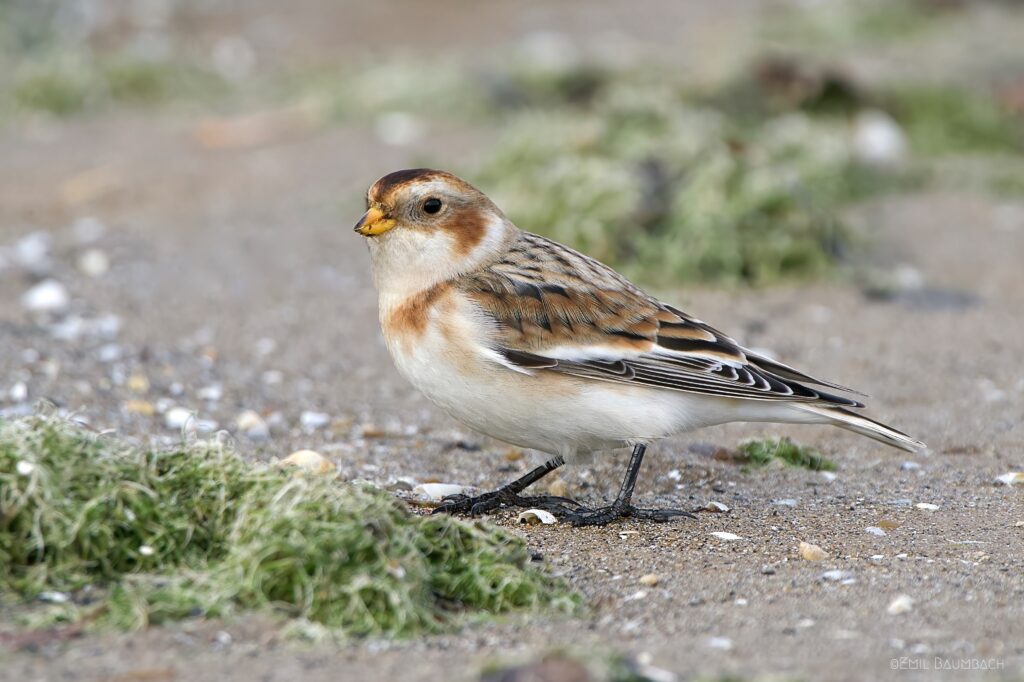 After a few minutes the Snow Buntings took off so I returned to chat with Emil and Russ and they told me the birds also liked to forage along the edge of the dune grass and the beach.  Sure enough a couple of minutes later two of them landed there about 30 yards away.  I carefully made my way on the beach around the busy birds to get some shots of them in better light and knelt down on one knee so I was closer to their level.  Here are a couple of shots as one of them fed on a stalk of grain laying on the ground. 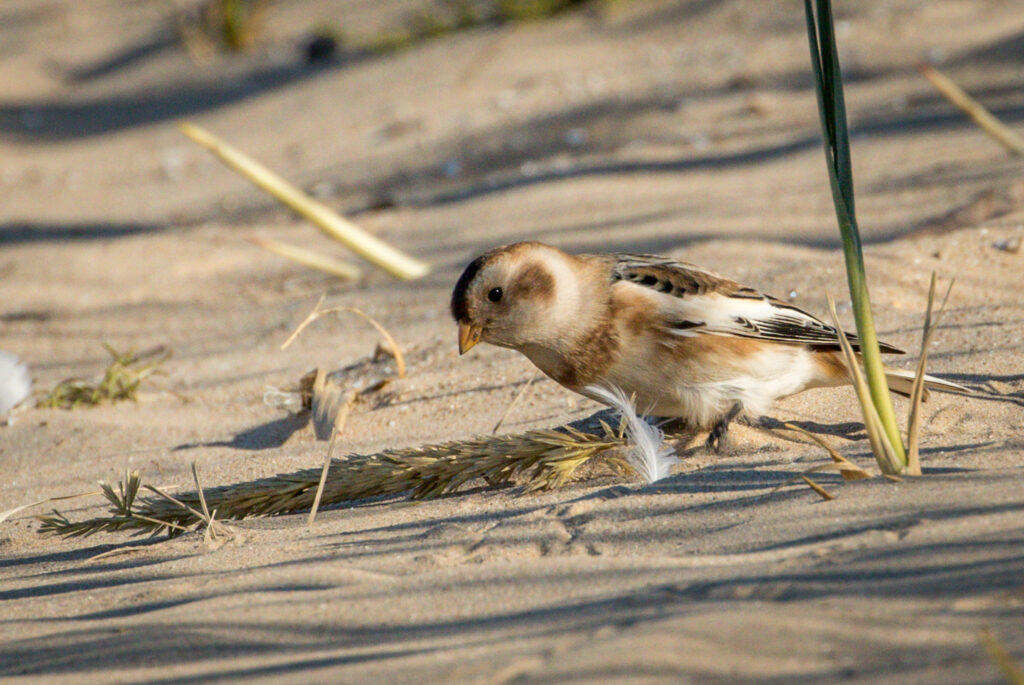 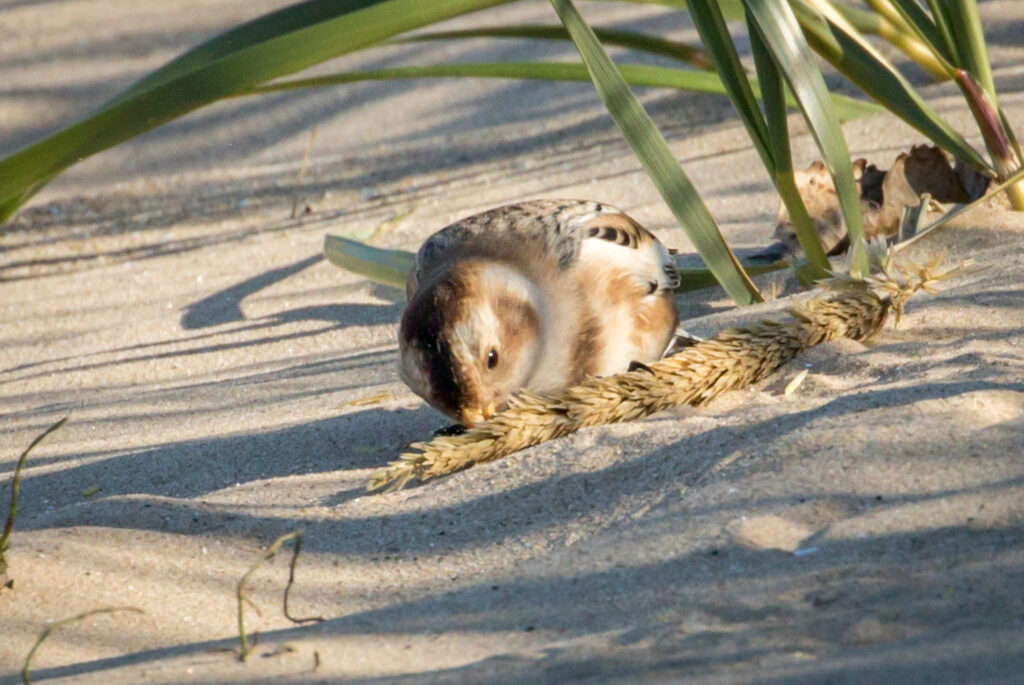 As I was shooting away, the other two buntings flew into the same area but even closer to me.  I continued to snap off pictures as they hopped closer and closer to me – in fact they got so close I couldn’t focus on them anymore (about 10 feet)!  I felt like I could have reached out and touched them! 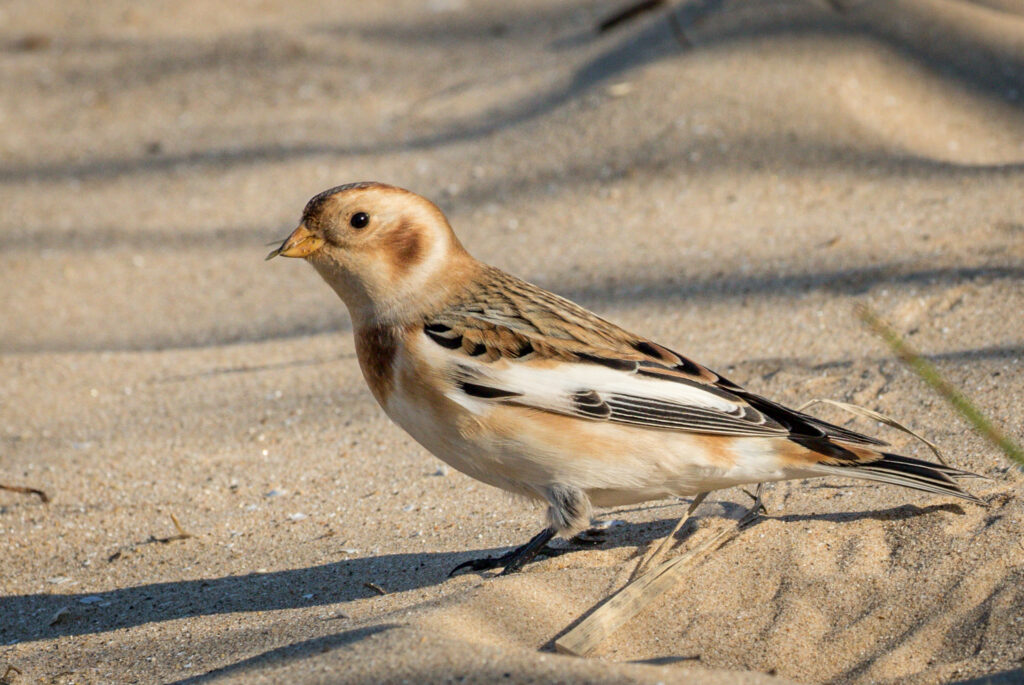 Emil swore he saw me grinning from ear-to-ear as the Snow Buntings got closer and closer to me – here’s his shot of me to prove it (note the two Snow Buntings highlighted on the left). 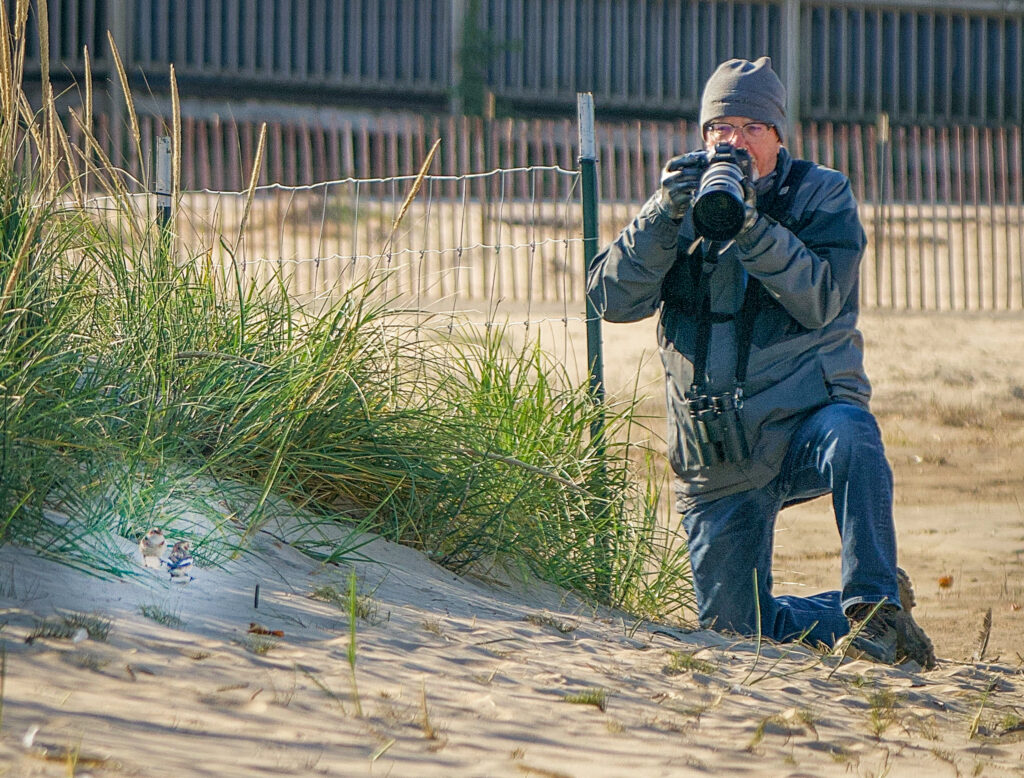 What a great morning!  Beautiful blue skies and Lake Michigan as a backdrop – Snow Buntings are worth the drive and they rewarded us with some great views.

PS – Asteinman was at the same spot several days before we went and got some shots of the Snow Buntings, too.  Here’s a nice one of the back of one so you can see the coloration. 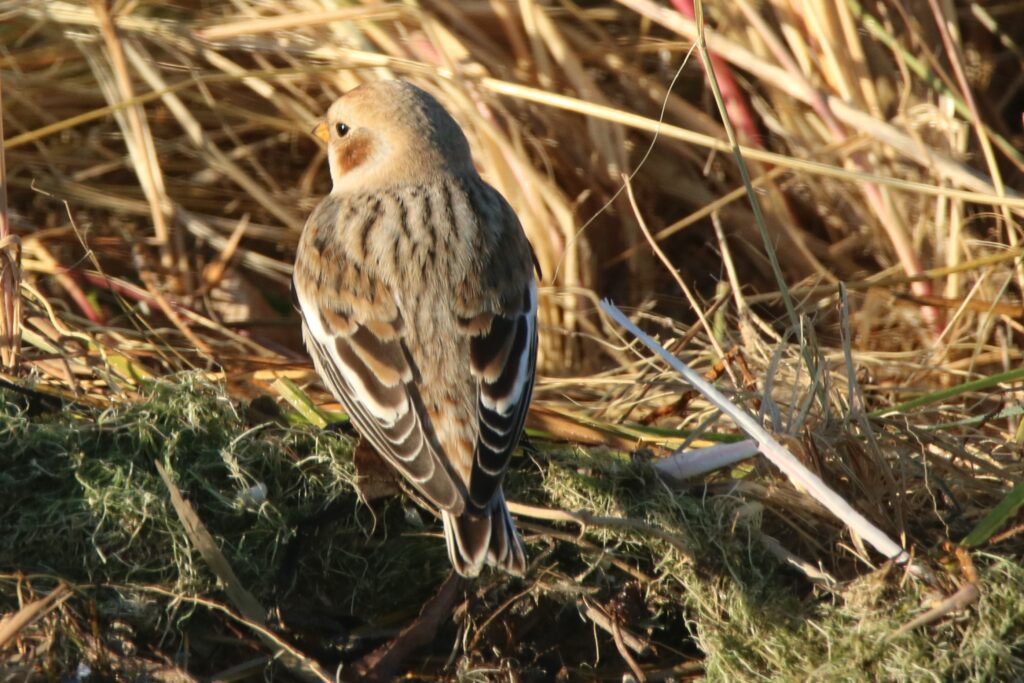 If you would like to learn more about GreatBirdPics.com Click Here.  Members can post their own Great Bird Pics, create an online gallery of their work, and receive regular emails about bird photography.