Downtown Chicago Is The Place For Rare Birds

As we searched for a calling Eastern Towhee we noticed a bird photographer set up farther down the path (you can tell a bird photographer by the tripod, big lens, and binoculars).  It turned out to be GBP member Emil Baumbach so we caught up with him a little while.  While chatting he asked if we had been down to see the Yellow-crowned Night-Heron (you might recall his great picture of one the other day).  He talked us into to going and gave us precise directions on where to find it – in downtown Chicago!

So after a quick lunch we took off and drove directly to the Lincoln Park Zoo.  This gem of a zoo is free and is nestled between Lake Shore Drive and high-rise condos.  Emil’s directions were explicit – walk straight back to the wolf exhibit and look for it in the Black-crowned Night Heron Rookery.  The what?  A bird rookery in downtown Chicago?  Well there it was on the zoo grounds but these were not captive birds – they chose this place to build their nests and to mate.  Here’s a couple of snapshots from the path – look up in the trees and notice all the nests: 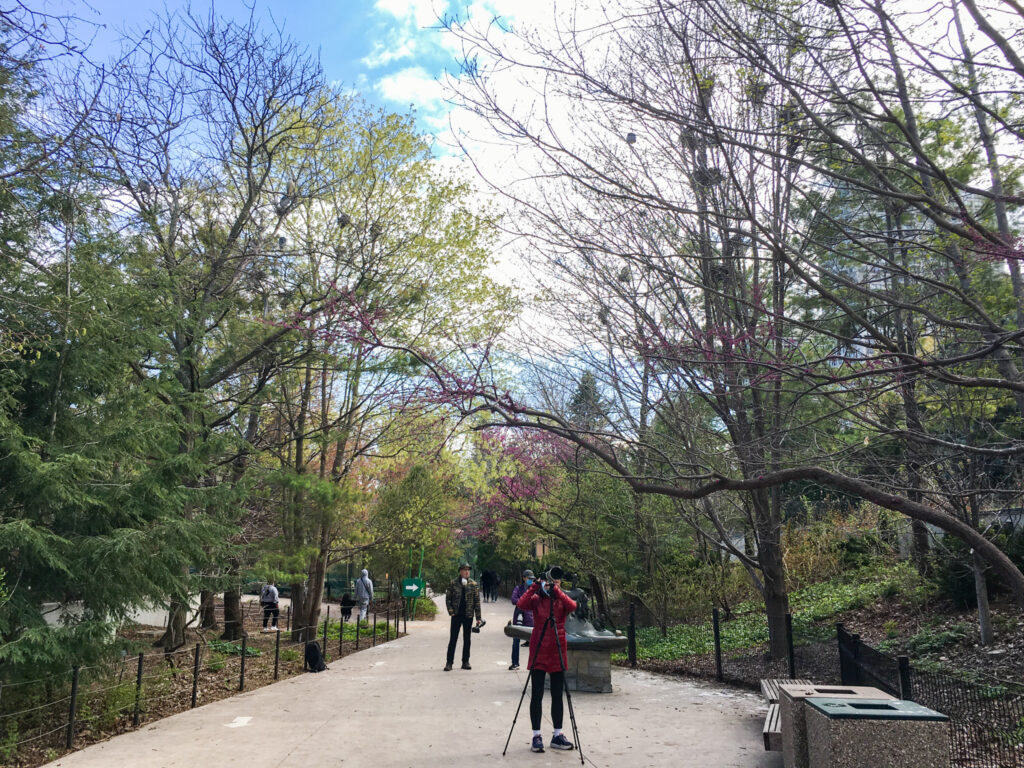 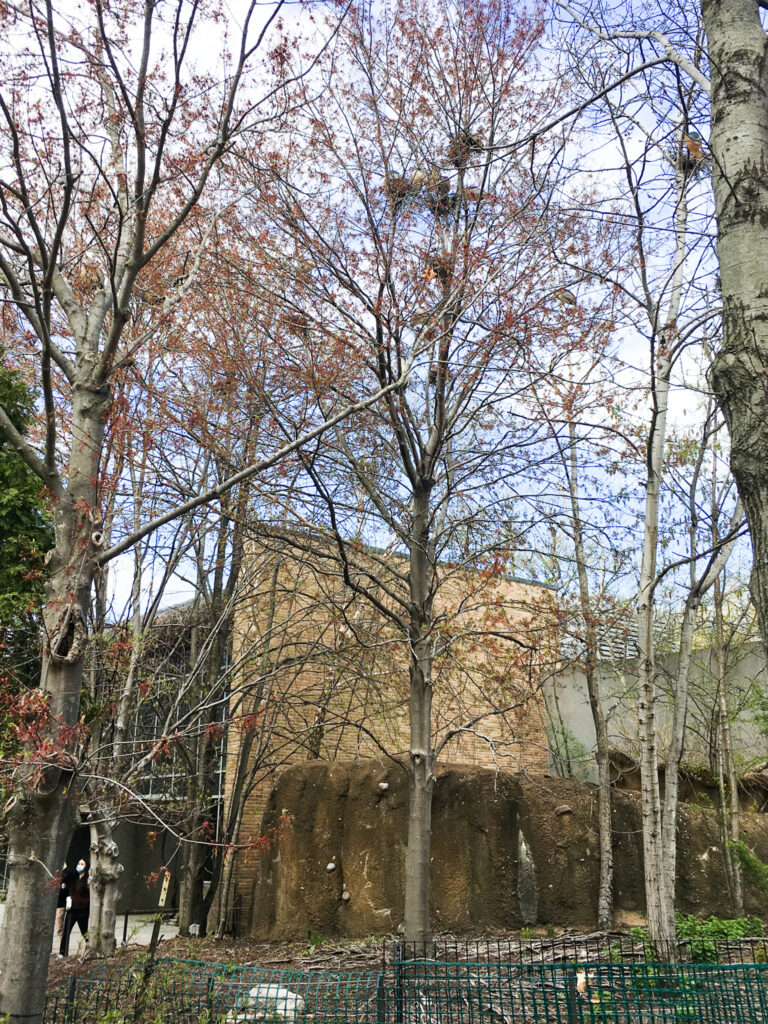 There were over 100 Black-crowned Night-Herons in and around the nests, flying in an out, and making a racket!  I asked a gentleman taking pictures of the birds why they might have chosen to nest there; he pointed out the nearby wolf enclosure and he speculated that the Black-crowned Night-herons may feel protected from other predators by living above a pack of wolves.  Interesting yet believable conjecture!  Here’s a couple pics of these stately birds in their rookery: 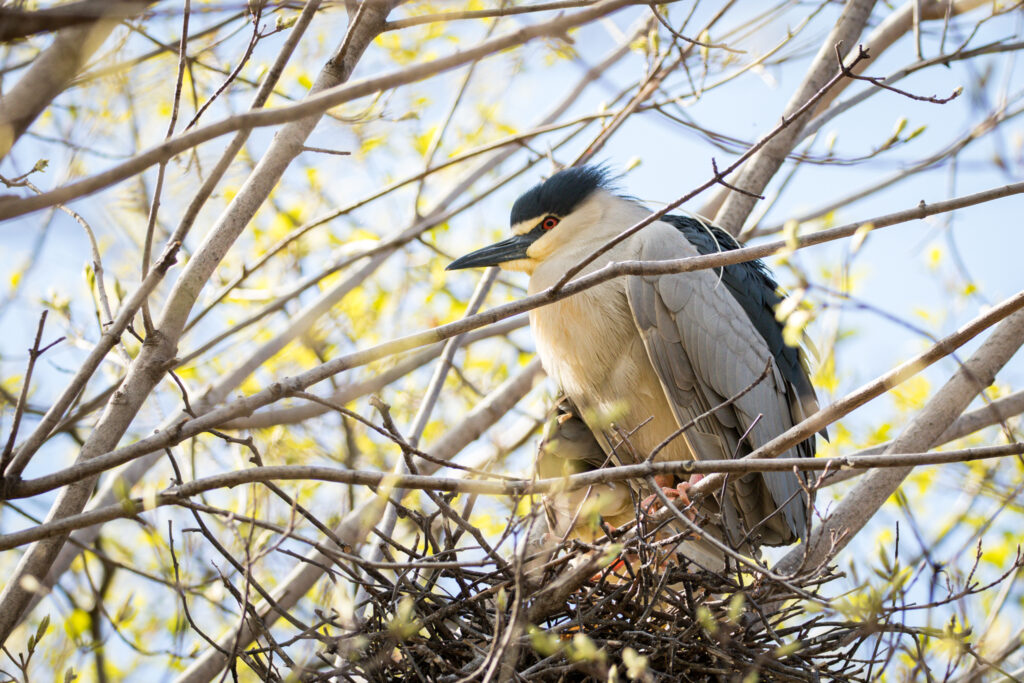 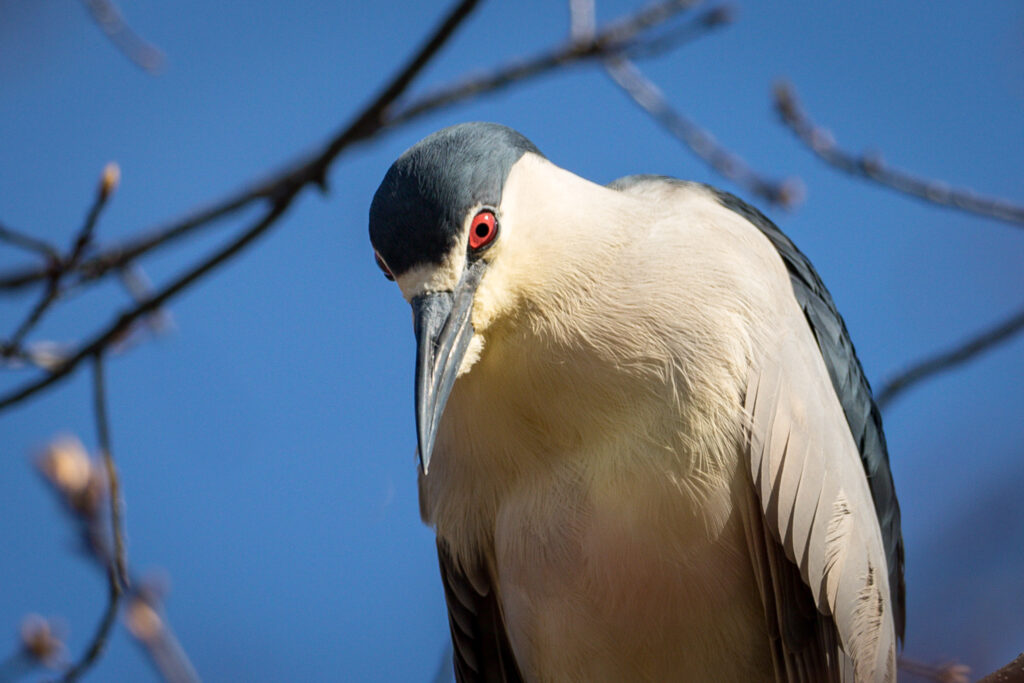 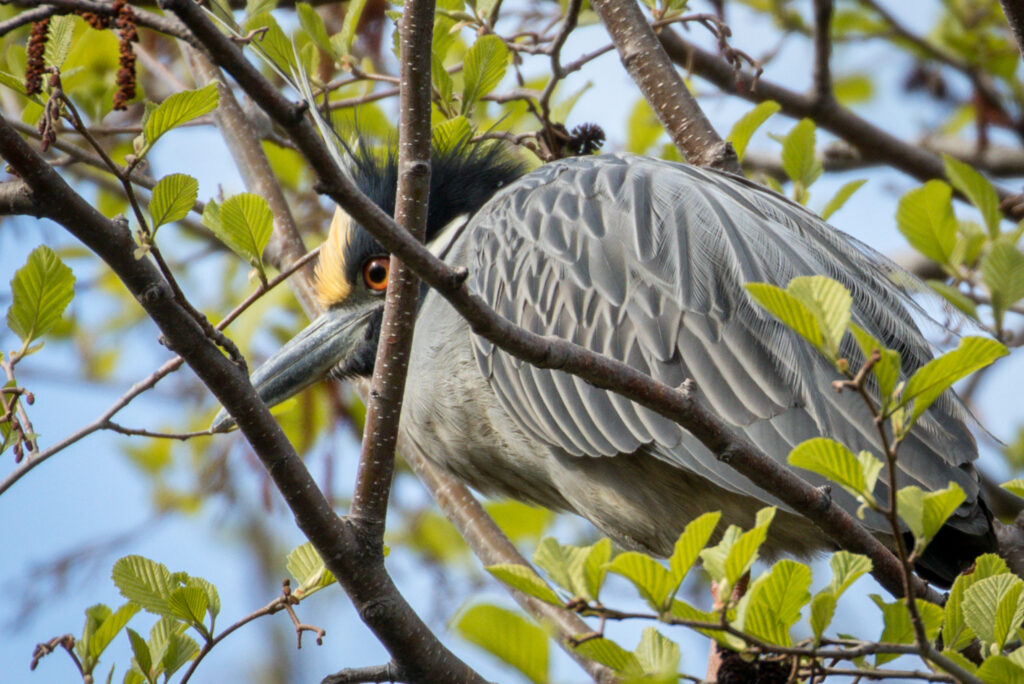 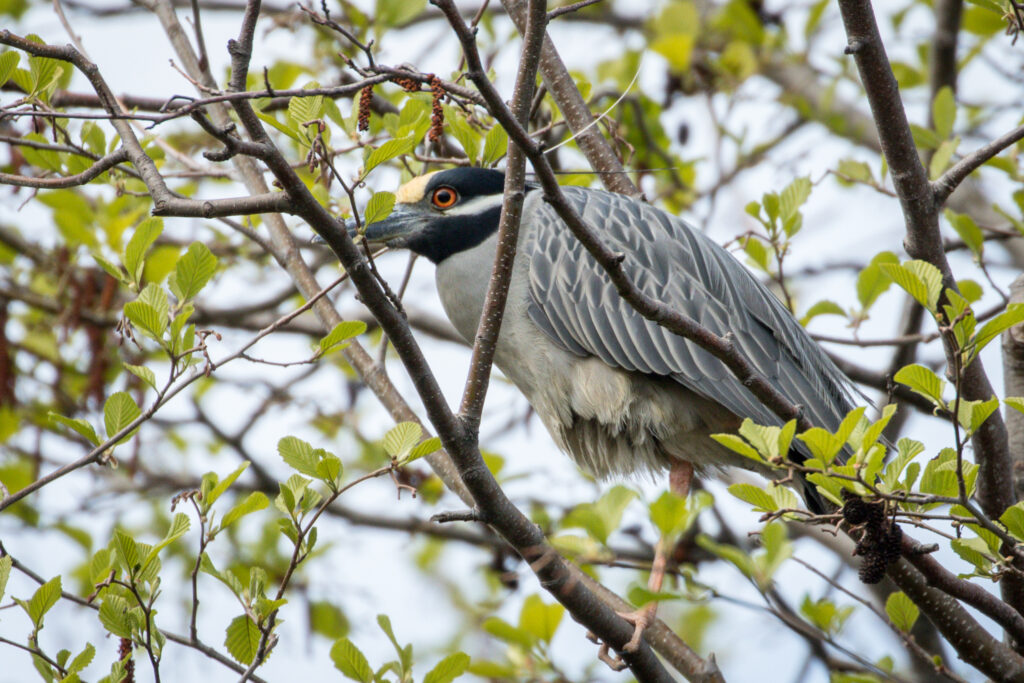 Those weren’t very good but if you would like to look at Emil’s excellent pic of the same bird CLICK HERE.

I could have stayed there all afternoon waiting for the bird to move into the clear but we had another rarity to find.  Just beyond the zoo was North Pond, a long oval-shaped pond which would probably take 30 minutes to walk around.  A Louisiana Waterthrush had been recently spotted there and that would have been a Lifer for us!  As we walked up to North Pond I was excited to see several Wood Ducks.  Now these must be city Wood Ducks because the country Wood Ducks we know would never have been so close to people.  Out by us you can’t get within 50 yards of a Wood Duck before it goes flying off fast as it can.  The city Wood Ducks had nerves of steel – we saw them walking on the paths as people walked their dogs nearby.  As we searched for the Woodthrush one pair of Wood Ducks approached us like they were Mallards at the Children’s Zoo looking for a handout – they had no shame!  At least they gave us some great looks: 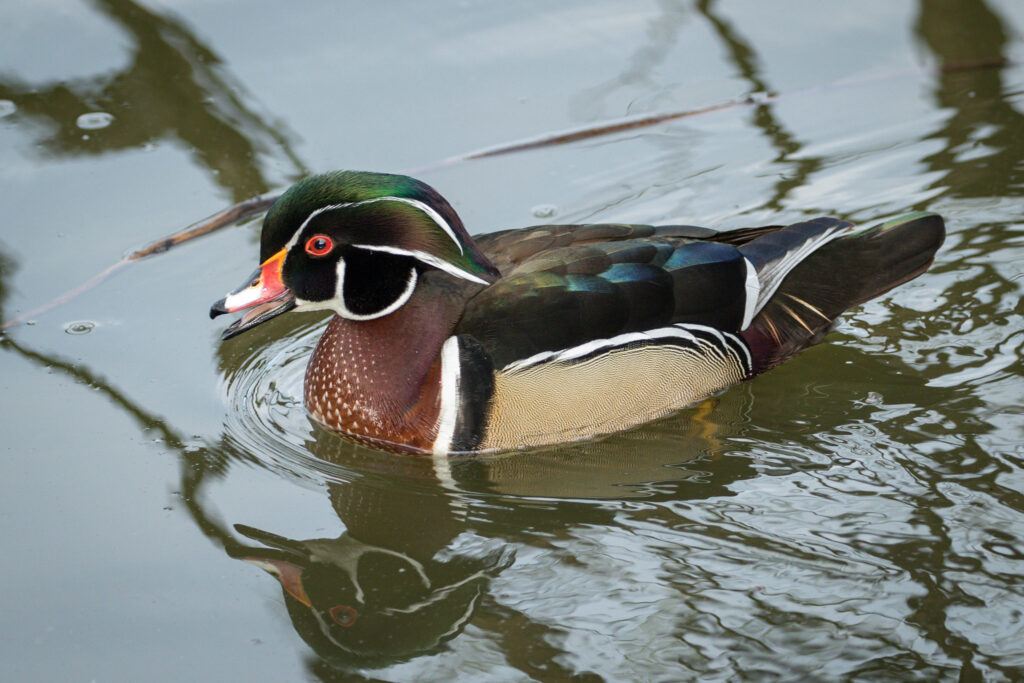 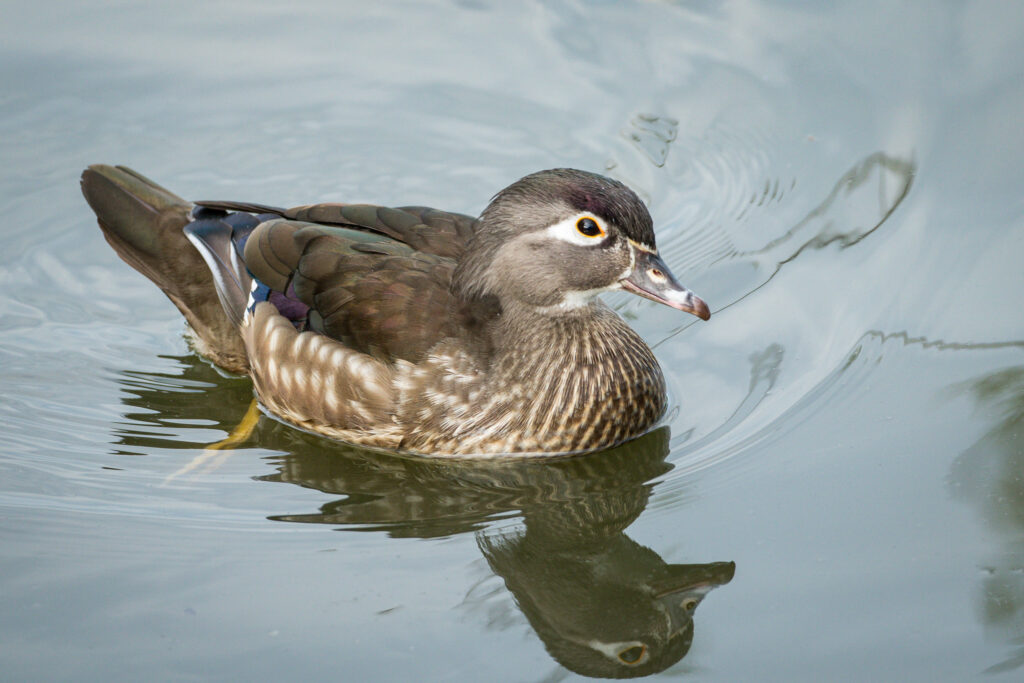 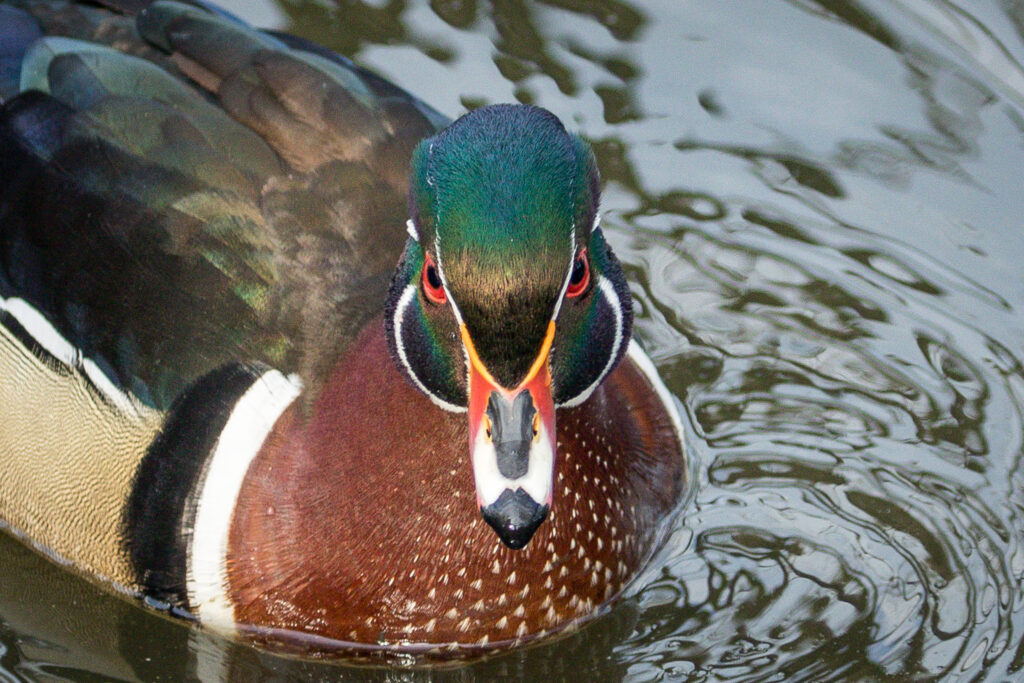 But I digress, as we were looking for the rare Louisiana Waterthrush.  As soon as we walked up we bumped into a guy with binoculars who told us he had just seen it 30 yards away.  No problem – we walked right there … nothing.  So the search began.  We walked back and forth along the edge of the pond to no avail.  Finally we decided to walk to the other side in case it was flushed out from where it had last been seen.  We slowly went along in search, almost making it all the around the pond when out of the corner of my eye I spotted a white flash at the waterline.  I stepped around as I called to Karen to get a picture, effectively blocking her view of this Lifer and flushing it out (again), flying back to where we had just been.  I luckily found it again and this time it was very cooperative, hopping along the waterline foraging for food and bobbing its tail.  Here are a couple of shots: 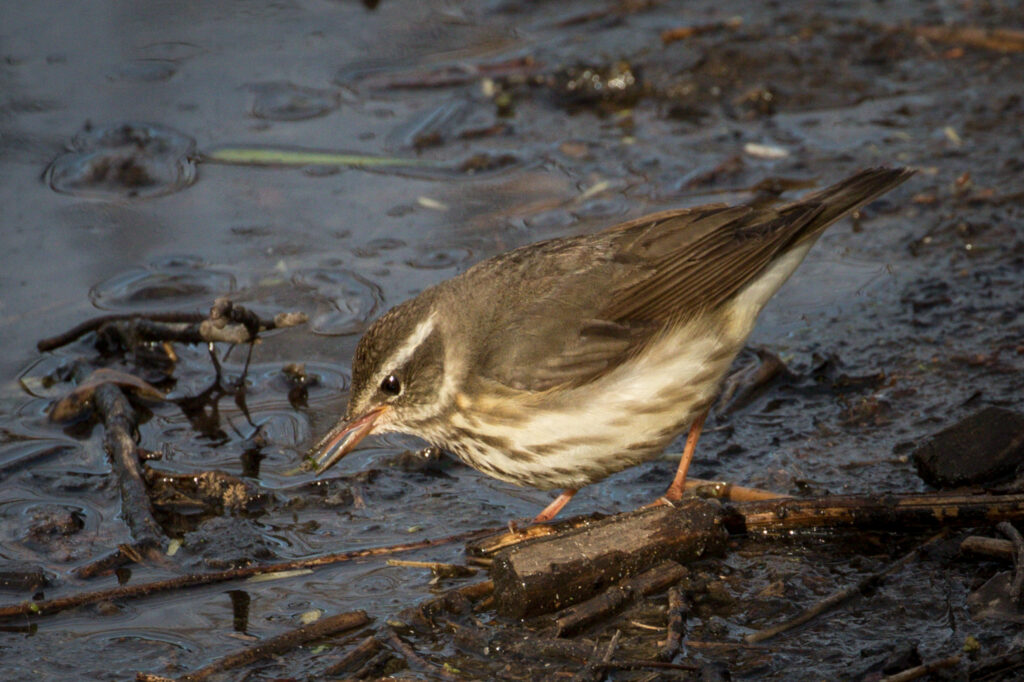 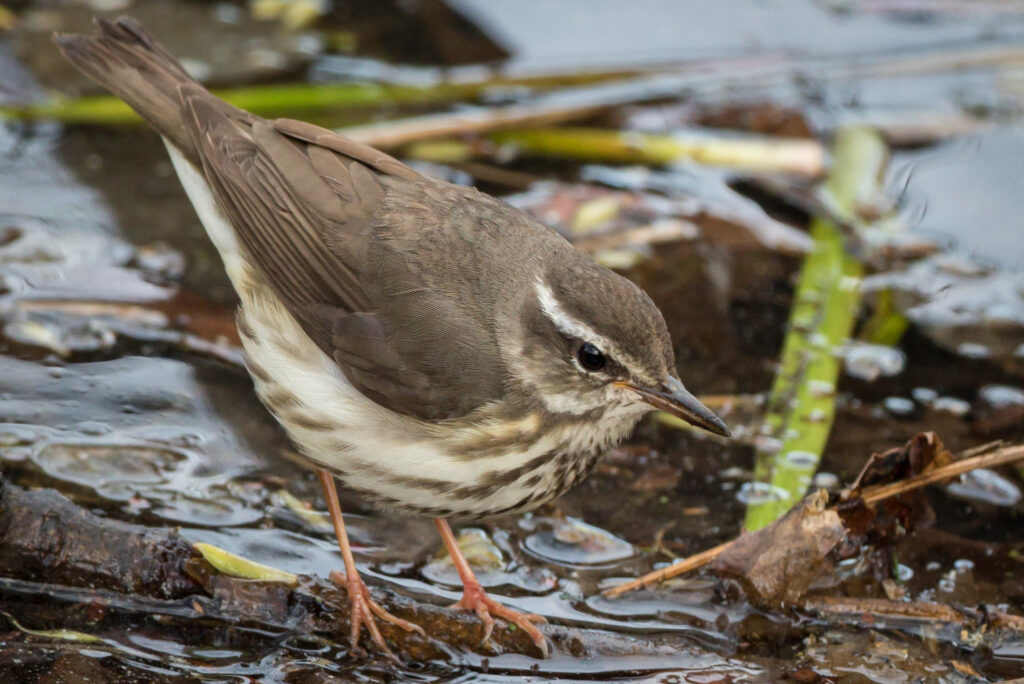 High fives were exchanged for finding a Lifer in downtown Chicago!  By now it was dinner time so we went a little farther north to the Beard & Belly for a great meal (had the best Pastrami Ruben I’ve ever eaten).  After a very long day we headed home and swore we were going to take the next day off – until we woke up to a beautiful cloudless morning.  But that’s another story…

If you would like to learn more about GreatBirdPics.com CLICK HERE.  Members can share their GreatBirdPics, communicate with other members, and receive regular emails about bird photography.