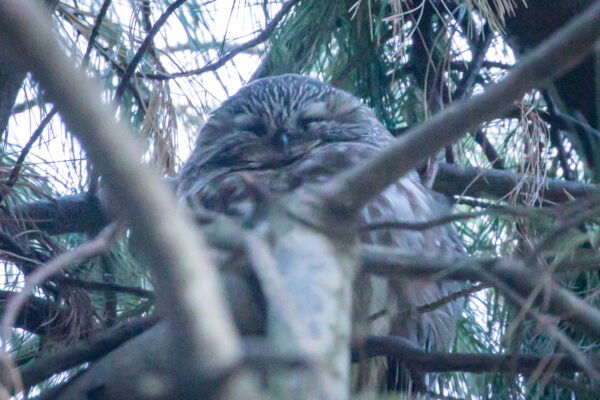 After viewing the owl for a couple of minutes (and thanking the other couple for pointing it out to Mark) we began to have an ethical discussion about sharing the “discovery” with everybody.  We were debating about whether or not to include it on our eBird checklist; once submitted every eBird user would be aware of the presence of the bird.  This is usually not a problem with most birds, but owl sightings are treated differently.  Because owls are nocturnal they rest during the day – the owl in question here didn’t move the whole time we were there.  But if we were to announce the presence of the bird many people would want to come and see it – maybe it would be a Lifer for them, or the Saw Whet Owl would be their First of the Year (FOY), or the first time seen in the state/county.  In other words, many people would want to see it.  However they would only be able to see it during the day, when the owl is trying to rest.  A cluster of people talking, moving around, trying to take pictures of it would disrupt its rest or even cause it to leave the area.  We consulted our Bird Brain friend Joan, who advised us to wait a couple of weeks before posting it on eBird.  This would give some time for the owl to settle in or move on without crowds of people influencing it.  So that’s what we decided to do – delay posting the report (and picture) for awhile in order to protect this uncommon bird.  It was a tough decision because it denied giving people the opportunity to see a rare bird to our area, but helped protect the bird from being disturbed.  We sided with the bird – what would you have done?

Some great pictures are coming in and I’ll feature them tomorrow.  Until then, Happy Birding!