Yesterday I described our visit to an unexpectedly good waterfowl spot in the middle of a subdivision.  What I didn’t mention was what happened after we were there about 20 minutes.  As we were observing the Wood Ducks, Pintails, and Gadwalls a noise washed over us.  The noise rose from a soft murmur to to deafening roar – like the sound of a jet airplane flying overhead.  But it wasn’t a jet.  Beyond the wetlands we were large cornfields and for some reason all of the Canada Geese in the fields decided to take off and start honking loudly.  It wasn’t a just a few geese, or 30 geese – we estimated there were over 800 geese squawking and barking as they rose up from the fields as one.  They flew right towards us and then landed in the wetlands, which were so peaceful a few moments before.  Below is a picture of what it looked like after they landed (the picture was taken elsewhere, but you get the idea: 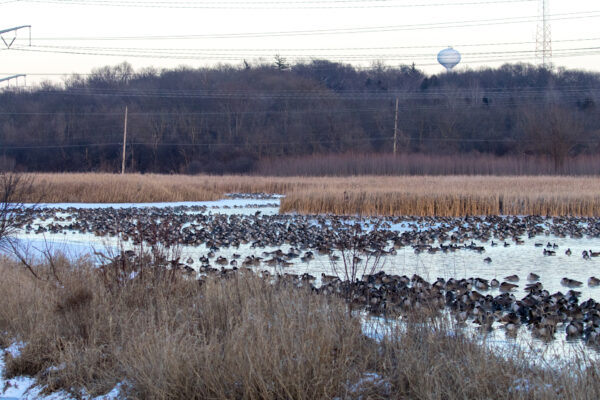 Once they landed it was hard to spot the other birds – in fact many of the smaller waterfowl we were observing took off when the mass of Canada Geese arrived.  It was quite a noisy spectacle to see and hear that many geese at the same time!  Is the Canada Goose still and endangered species?  It’s hard to believe with so many of them around.

Our members have been busy submitting some great pics.  Here are a few of the latest:

A rare bird for our area.  Emil Baumbach must like Montrose Beach – and no wonder cause he always gets such great pics there.  This one of a bird that I probably would have had a hard time identifying.

Putting on the feedbag.  Looks like Emil was lying down in the fluddle to get this one – but worth the effort to get such a great shot.  Note how the spots on the breast abruptly end – that’s a good way to ID this bird.

Ducks  Birder 2011 has a great shot showing two different types of ducks together.

A rainstorm just passed over so I don’t know if we’re going to get out today.  Hope you do – Happy Birding!