On the Hunt for Snow Geese

Last Tuesday Birding Buddy Mark, Karen and I set off for Emiquon National Wildlife Refuge which is about three hours SW of Chicago on the Illinois River.  Our Target Bird – Snow Goose.  Before taking off I talked with Master Birder Vicki S. who told us where to go for the best looks.  She said we should stop at Chautauqua National Wildlife Refuge on the way in.  Which leads us to today’s story – the story about our visit to Chautauqua and Emiquon will come next week.

After a three hour drive we were getting close to Chautauqua and were excited – it was a beautiful WARM day and we couldn’t wait to explore a new area.  As we drove down a two-lane road Karen suddenly exclaimed, “Look!”  I pulled the car over onto the shoulder and off to our left was a farm field, barren except that it looked like snow covered the top of the hill.

Snow Geese!  Hundreds of them all over the crest of the hill – White Morphs and Blue Morphs (more on those next week, too).  We were very excited – we didn’t have to work at all to see these birds.  Not wanting to trespass on the farmland I zoomed in to get some shots of the Snow Geese. 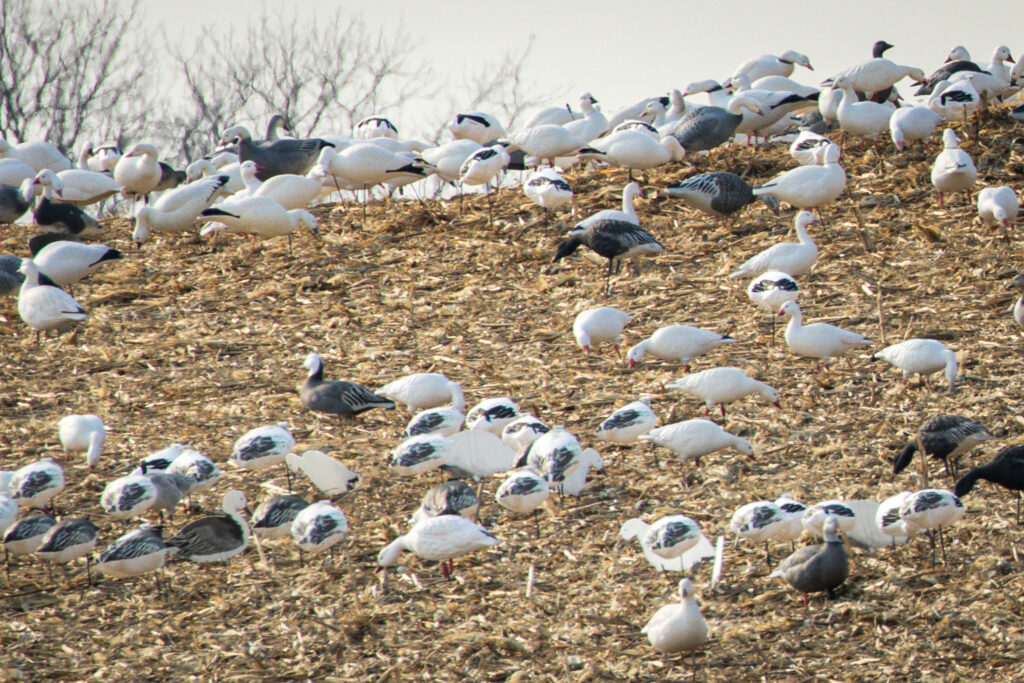 After gawking at all the geese we hopped back into the car and continued on our way to Chautauqua.  Less than 2 miles later we saw another formation of Snow Geese on top of a crest in the middle of a farm field.  Check out how wide the expanse of geese was: 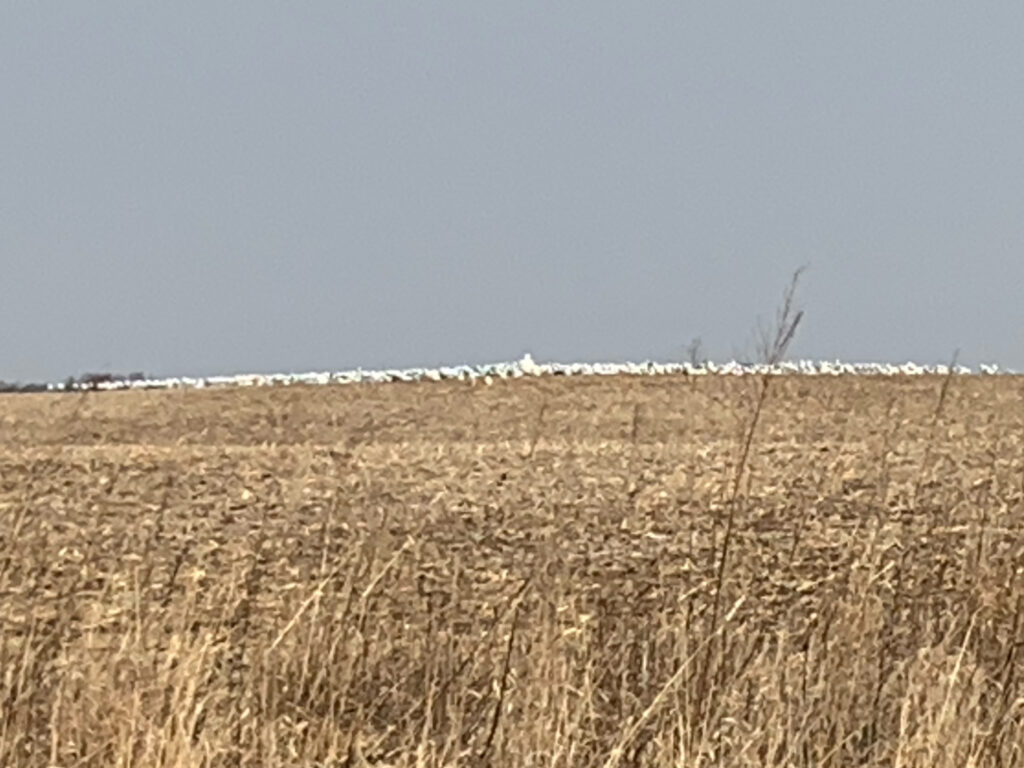 Perhaps you noticed it too, but we were mystified by the tall white “bump” in the middle of the flock.  When we trained our binos on it here’s what we saw: 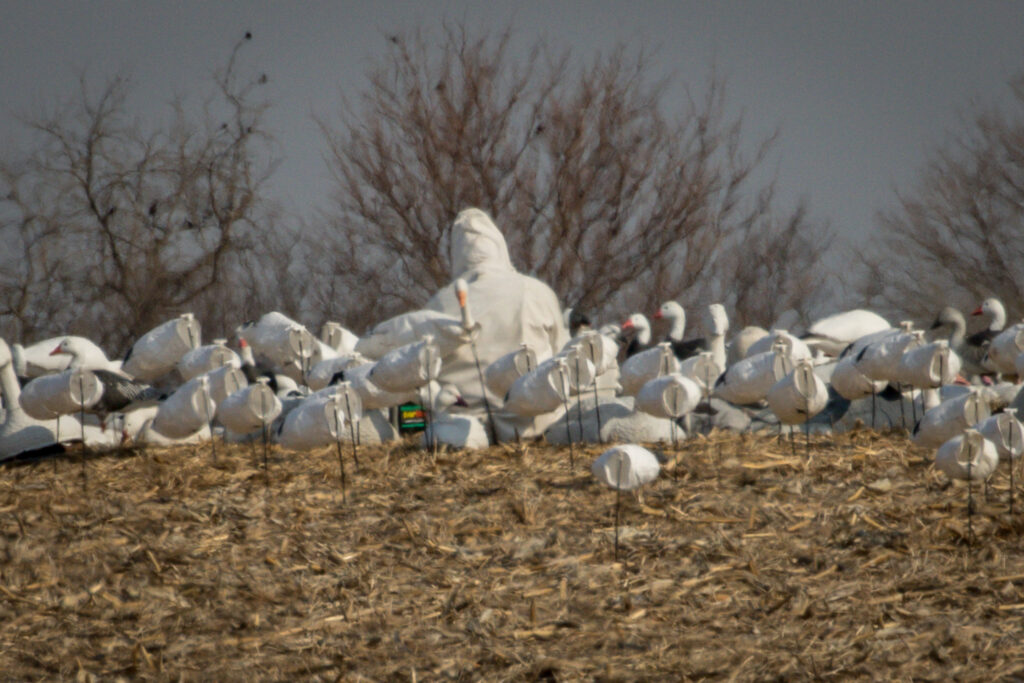 It was a person in a white hoodie parka!  What was he doing up there?  Take a closer look at the picture and the Snow Geese in particular.  Can you tell what they are?  Here’s another shot of the geese: 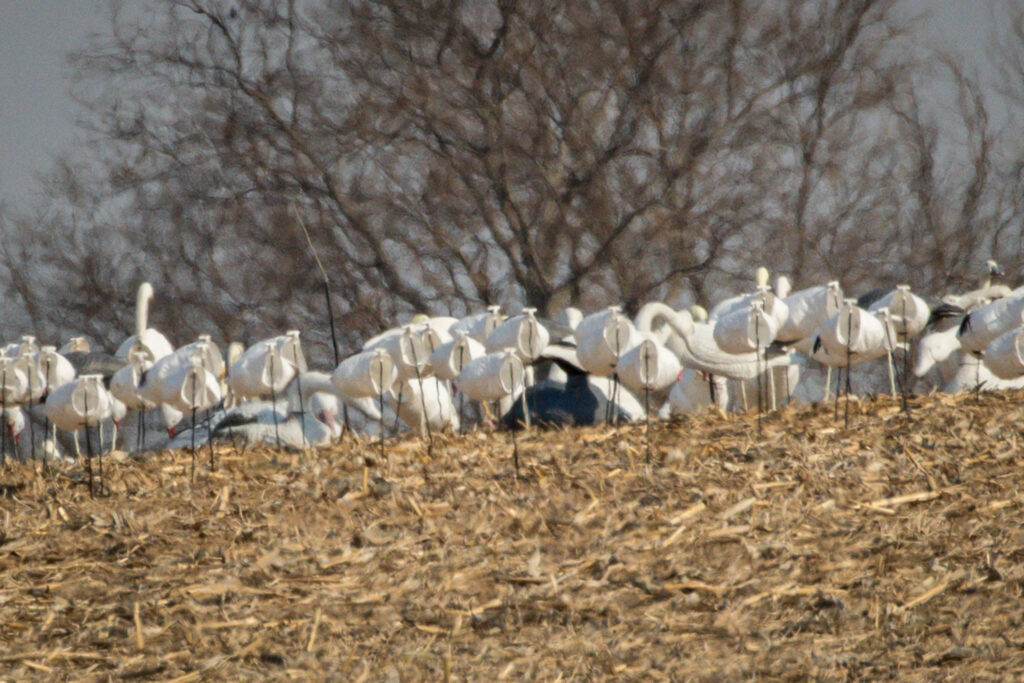 They aren’t geese at all – they’re decoys!  Hundreds of decoys.  If you look closely in the middle you can see another person there, perhaps with a black backpack on.  We thought it was a science research team up there studying Snow Geese.  It piqued my curiosity so I called the Wildlife Manager at Chautauqua NWR.  I asked Courtney if she could shed any light on the research being done but she was unaware of any going on, but she said she would ask around and find out for me.  Not long afterward Courtney was kind enough to call me back with the answer.  Did you guess it already?  They were hunters!  Surrounded with hundreds of decoy Snow Geese they were hoping to lure some in.  Go back up and look at the second picture (from our initial stop) and you’ll see that there are several decoys in the foreground – they certainly attracted in the geese there – but no hunters were in that area.

I looked up the limit for Snow Geese during Illinois’ hunting season – there is no limit.  Hunters can take as many as they want.  I’ve never been a hunter but I recognize that hunting is a way-of-life for many.  As you will see in next week’s post there were plenty of Snow Geese to go around.

Until then, have a great weekend.

I gave up hunting many years ago, just don’t have it in me to kill anything anymore. Where as I have no problem with responsible and respectful hunting, this seems a bit extreme.