I Told You – You Have To Look At Them All

We went back to the Morton Arboretum Saturday morning for the fifth time looking for the Red and White Crossbills which have been seen there regularly for over 3 weeks.  The last time we went there we arrived at 7:30 AM and they showed up 5 minutes after we left, at about 9:30 AM.  Saturday we thought we would get there around 9:00 and see them arrive, only to be told they were there at 7:30 AM.   Well we hung around anyway in hopes of seeing them and it gave us an opportunity to catch up with lots of our birder friends who were also looking for the Crossbills.  I’ll bet there were at least 30 birders in the vicinity with probably $200K worth of binoculars and cameras hung around all those necks.  Lots of eyes, but alas, no Crossbills were spotted.

Karen and I were just about to head out when a flock of Sandhill Cranes were heard, then seen, over the tree tops far off in the difference.  Somebody in the group said, “Check to see if there are any Whooping Cranes in the flock.”  I always thought this was an old wives’ tale about Whooping Cranes traveling with Sandhill Cranes – we probably have seen thousands of Sandhills flying overhead and we have never seen a Whooping Crane among them.  No sooner had that thought crossed my mind, someone exclaimed, “There’s a Whooping Crane!”  All eyes scanned the 75 Sandhills – here’s what I saw: 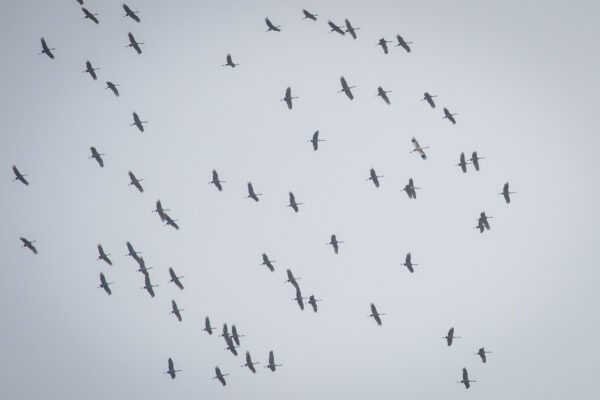 Can you spot it?  The one that is larger and whiter than all the others?  How about in this one? 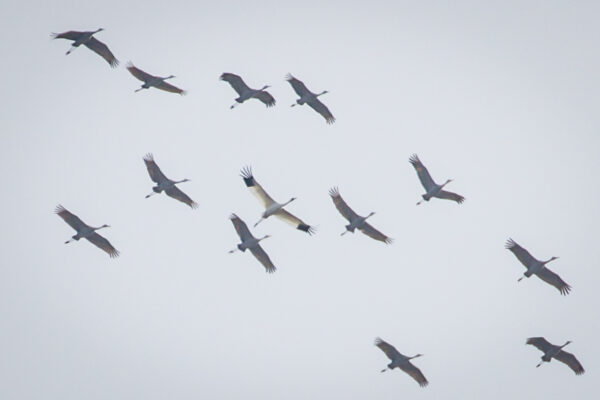 In the above pic its easier to see the white body and black wingtips surrounded by the Sandhill Cranes.  Here’s one last picture with an extreme closeup: 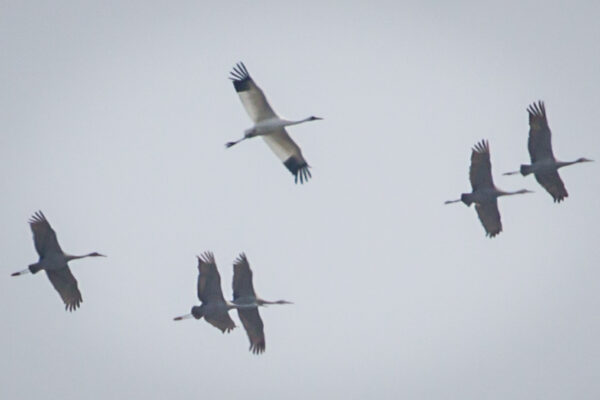 There was a lot of excitement in the group – a Whooping Crane was a Lifer for several people and a State Lifer (seen elsewhere before but first time seen in Illinois) for several others (including me).  It was ALMOST as good as seeing the Crossbills but it was thrilling to see a rare bird nonetheless.  Whooping Cranes were almost extinct in 1966 with only 42 existing in the wild.  Due to a successful breeding program, their numbers have steadily grown, although they are still considered an endangered species.

This just goes to prove my point, as previously stated in the GBP Notes on October 4th – you have to check out all the birds in a group.  You never know if there might be a unique bird among them.  That’s what differentiates a Birder Wannabe from the Birder First Class.

PS – If you found this page while searching the web we’d be happy to have you join us here at GreatBirdPics.com.  Find out more about the site HERE.