As we continue to delve into the Bird Picture Quality Self-Assessment Rubric (QSAR) many of the upcoming Components (Exposure, Lighting, Color Contrast, Cropping, and Composition) can be altered during post-processing.  I use Lightroom and there are about 20 different settings I regularly use to modify my images.

With that behind us, the next two QSAR Components of Technical Quality are Exposure and Lighting are examined in this article.  The Exposure Component is the overall amount of light or dark in an image, while Lighting refers to the amount of light just on the bird.

The Exposure Component of the QSAR:

The Exposure Component of Technical Quality has three Levels of Quality, which are described below:

The photograph is overexposed or underexposed = Documenting Shot

Sometimes it’s tough to get just the right amount of light in a bird photograph.  We may set up the camera to get the correct exposure yet the camera seems to have a mind of its own at times.  This could result in an image which is too light or too dark.  We are not talking about just the bird portion of the image but the overall exposure of the photograph.  Oftentimes this can be corrected during post-processing.  If uncorrected (or impossible to correct) the quality of the image usually would be judged a Documenting Shot.

In this first example, one glance at the image of the Verdin in foliage and we know everything is overexposed. 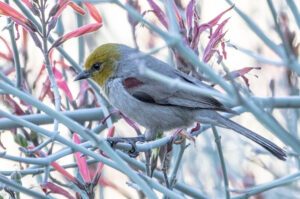 The next example was taken very early in the morning so the Prairie Chicken, along with the landscape around it, is underexposed.  Even though the bird is interesting and has some detail in the image, overall this would be considered a Documenting Shot. 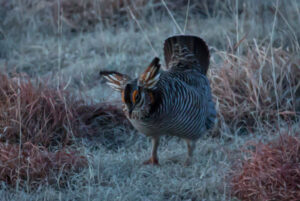 The photograph is appropriately exposed = Good Bird Photo or GreatBirdPic

When looking at photographs that are appropriately exposed, the overall exposure is neither too light or too dark – it’s just right.  This Level of Quality is mapped to two different Types of Bird Photograph.  If the lighting is correct, the resulting image may be a Good Bird Photo or it might be a GreatBirdPic – other factors (such as Focus, Cropping, and Composition) will determine which.

Here is an example of an appropriately exposed image that is a Good Bird Photo.  Nothing special about this Great Blue Heron image, which was taken after it passed by. 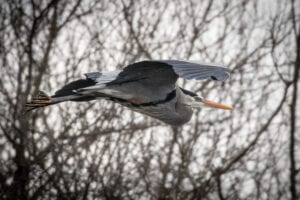 Below is an example of a bird photograph with good exposure which is a GreatBirdPic quality. A Great Blue Heron perched on a log. 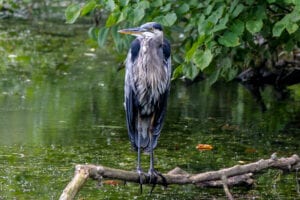 The exposure of the photograph helps tell a story = Award Worthy

This may be a bit nebulous, but the bird photograph artist carefully adjusts the exposure of the image to help give the overall impression desired.  If the bird is in a dense forest, it may not look right to fully illuminate the image, conversely if the bird is on a bright, sunny beach the artist wouldn’t want the image to be too dark.  The exposure should help convey what is going on around the bird to the audience.  Below is Emil Baumbach’s Great Blue Heron picture.  The exposure is a touch dark, which gives the viewer the impression that the bird is tucked away in a hidden place – it helps tell a story.

We see there are two Levels of Quality for this Component.  Either you have the lighting right or you don’t.

The bird is our primary focus so when most of the bird is under-exposed or over-exposed the quality of the photograph is low; A Documenting Shot at best.   Below is a pic of a Sora feeding in the reeds.  Because it was backlit (the sun was behind the bird shining toward the camera) the overall exposure of the image is appropriate but the Sora itself is cast in shadow, making it difficult to see. 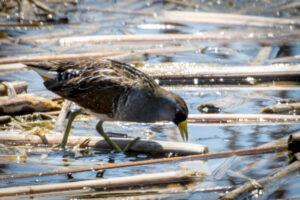 When trying to capture the flight of some Pine Siskin I had to shoot up into the bright sky.  This make the entire image too light, including the birds. 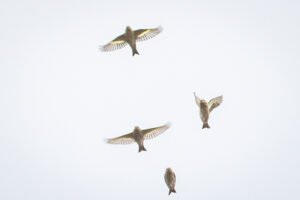 Sometimes you can’t win –  the light coming in from the side of the bird can overexpose the side facing the sun and underexpose the rest of the body like in this House Finch below. 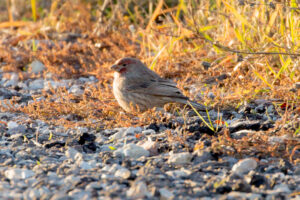 Most of the bird photographs on GreatBirdPics.com fall in this category – our members submit well-lit photographs.   As you can see a well-lit photograph could be deemed a Good Bird Photo, GreatBirdPic or Award Worthy photo as other factors (such as Focus, Cropping, and Composition) will determine which.  In our first example I took a shot of a European Goldfinch from far away and had to use an extreme crop to see enlarge it.  Well-lit, but barely a Good Bird Photo. 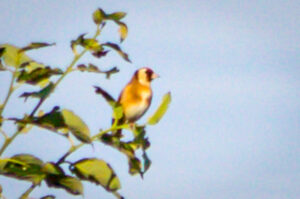 Birder2011 submitted a female and male Indigo Bunting.  Great lighting in both shots; particularly on the male (the dark color blue is often hard to capture detail) – both a GreatBirdPic. 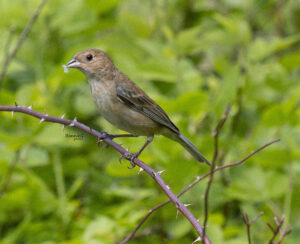 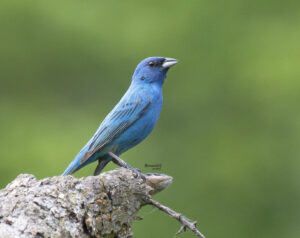 Below is a pic that breaks the Lighting conventions.  The interesting light play around the head and body, and the reflection of the lighthouse named “Big Red” in Holland, MI help elevate this pic to Award Worthy. 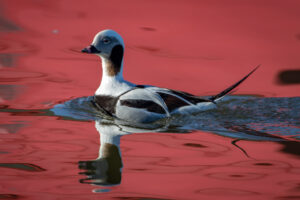 Another note about Lighting – the sun is our friend.  Sometimes, even on a cloudy day, there is enough light to get good photographs.  However when compared to the same shot in the sun, the cloudy day images look flat.  Take a look at the two images below of a Louisiana Waterthrush.  They were taken just seven seconds apart; the first one was taken in the shade, the second one taken when it had hopped into a patch of sunlight.  The first one looks OK until you look at the one below it and you can see so much more detail and vibrancy in the colors. 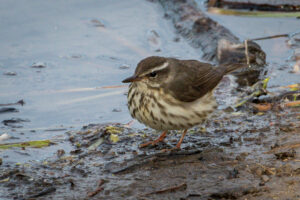 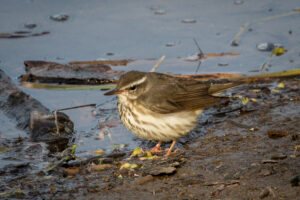 Sometimes we take the Exposure and Lighting in our bird photographs for granted.  Small adjustments during post-processing can make a big difference in the final quality of the image.