Take a moment to carefully study the picture of a Robin submitted by Emil Baumbach below: 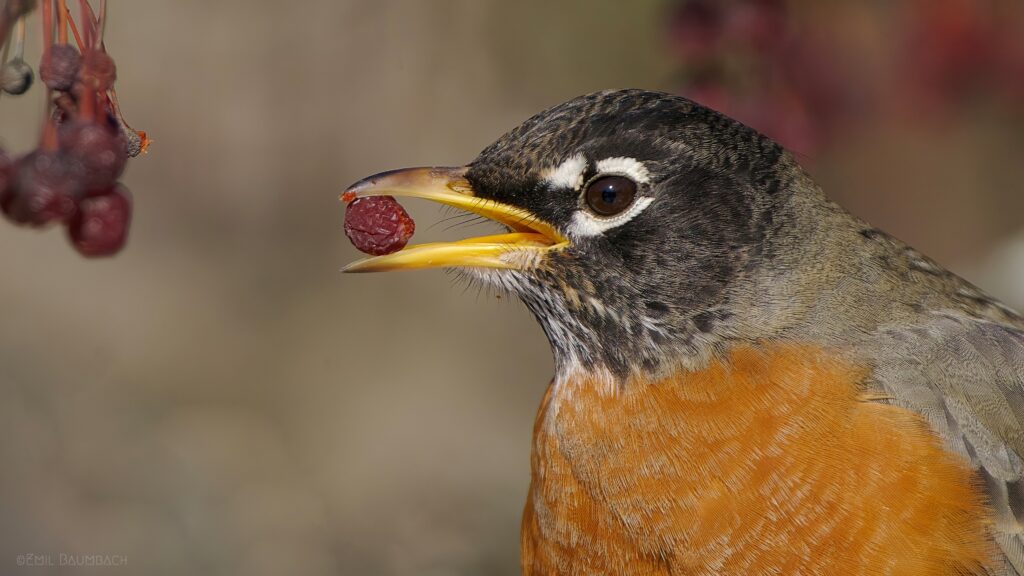 Would you agree with me that it is a GreatBirdPic?  I think most would – but what makes it so good?  Let’s start with the overall composition; what is your eye drawn to first?  I noticed the berry, perfectly clasped between the tips of the bill.  This shows us that the berry was just plucked (the Robin will work it closer to the mouth opening next).

Then I noticed the eye, which is such an important object in any bird picture.  The Robin’s eye has a dot of white within it – the catchlight.  When a photograph captures a catchlight it brings even more life to the bird.  Surrounding the eye are its orbital feathers, which are tiny round feathers all of which are clearly defined.

In fact, notice how every part of the bird is in sharp focus.  You can see every feather in detail and it’s easy to see the variety of colors on the bird.

Now take a look at the dimensions of the image – do you notice that it appears to be wider than most images?  Why would Emil crop it like that?  If he hadn’t, the stalk of crabapples in the upper left would have been cut off.  Emil cropped the image wider than usual so that the viewer can see where the berry in the Robin’s mouth came from.  In fact if you look closely you can see the one stalk where the Robin plucked its plunder from sticking out on the right side of the cluster.  He could have cropped it using the usual height/width ratio and included the hanging stalk but that would have reduced the amount of red-breast in the image.  The red-breast of the Robin is an important field mark and we expect to see it in pictures of that species.  Including it also adds interesting color to the composition.

Knowing Emil he watched that bird quite a while and took a number of pictures while it was eating.  The one he chose to share with us has all the elements of a GreatBirdPic.  Thanks, Emil!