Great Egrets All Decked Out

Before I get into today’s topic I have a prayer request for my brother Doug.  Doug helped nudge Karen and I into birding by challenging us to find 100 species one May many years ago.  Doug is scheduled for major cancer surgery today – one of those 6-8 hour surgeries.  So if you can, please send Doug your positive thoughts and prayers.  Thanks.

Last time we were visiting my dad on Hilton Head Island we went off to Pickney Island National Wildlife preserve.  We’ve been there before and had great success finding a variety of birds and this time was no exception.  The preserve is a 5 mile long island  between the mainland and Hilton Head, with marsh then Atlantic Ocean estuaries on either side.  About a mile from the parking lot is Ibis Pond.

Aptly named, when we were there last August it was a breeding ground for dozens of White Ibis.  As we walked up to the area this time we expected to see lots of White Ibis in the low shrubs on the small island inside the pond; we were right in that we saw lots of white birds but not Ibis.  Great Egrets had taken over Ibis Pond (not a White Ibis to be seen) and they were preparing nests.  What really struck us was their breeding plumage!  Like a poor-man’s peacock, the Great Egrets all exhibited a spray of plumes (called an aigrette) emanating from their backs.  These plumes were once highly prized – by hat makers.  Hundreds of thousands of Great Egrets, Snowy Egrets and other birds in mating plumage were slaughtered for their feathers almost to the point of extinction (CLICK HERE to read an article about this from Smithsonian Magazine).

Here are a couple of birds displaying their aigrettes.  Also note another breeding feature of Great Egrets, the lime-green lores. 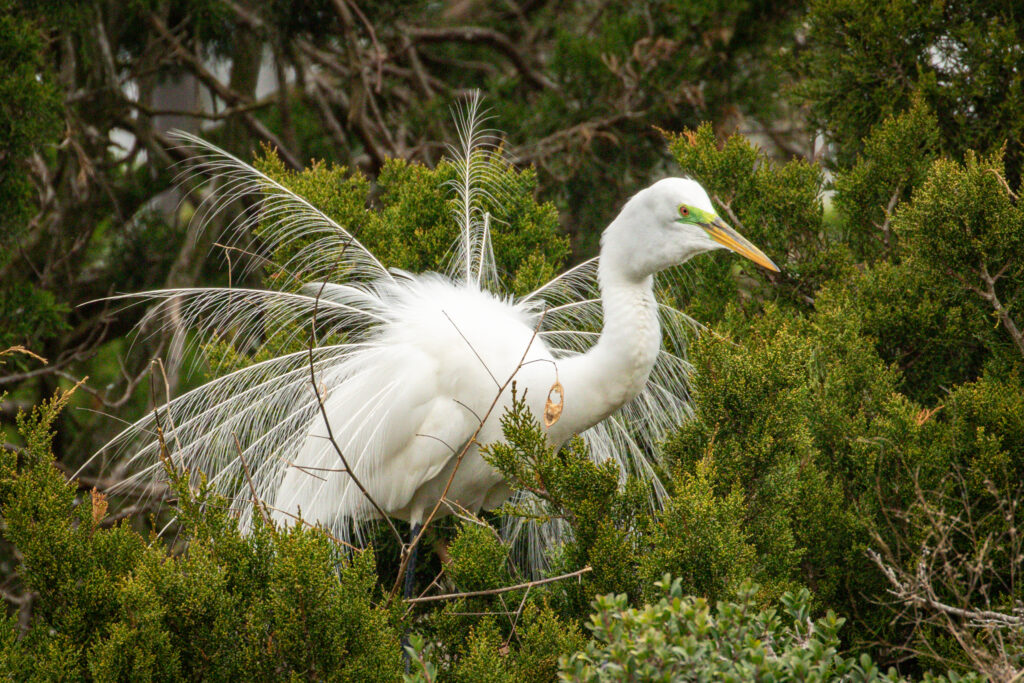 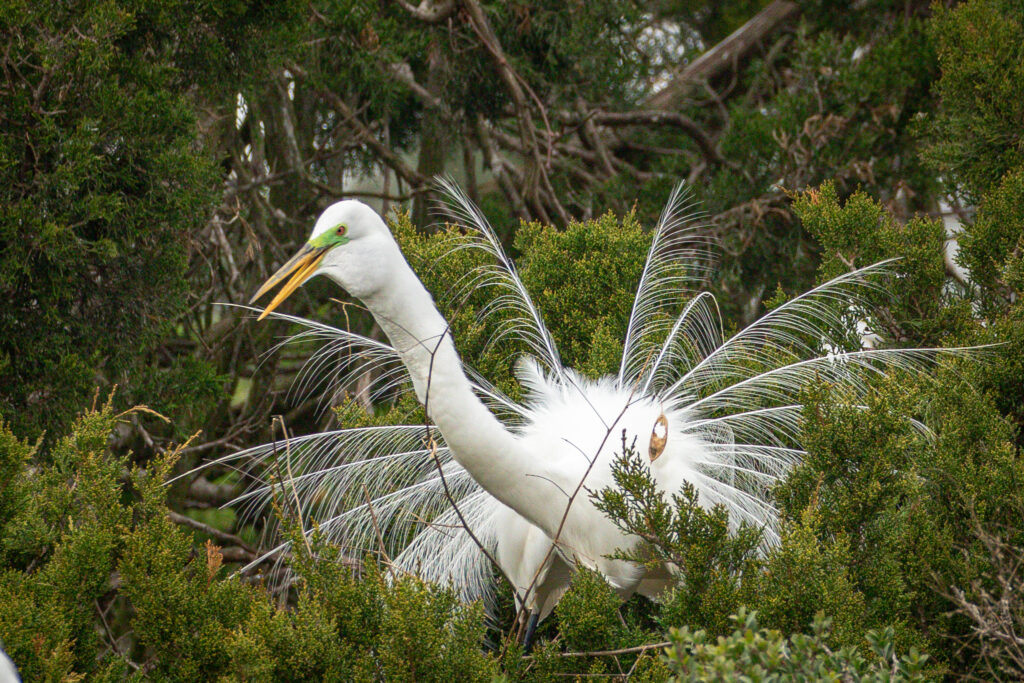 The Great Egrets were also building nests for their future clutch of eggs.  Here we see a Great Egret forming twigs into a nest.  Below that is a Great Egret flying in toward its nest with a twig in its beak. 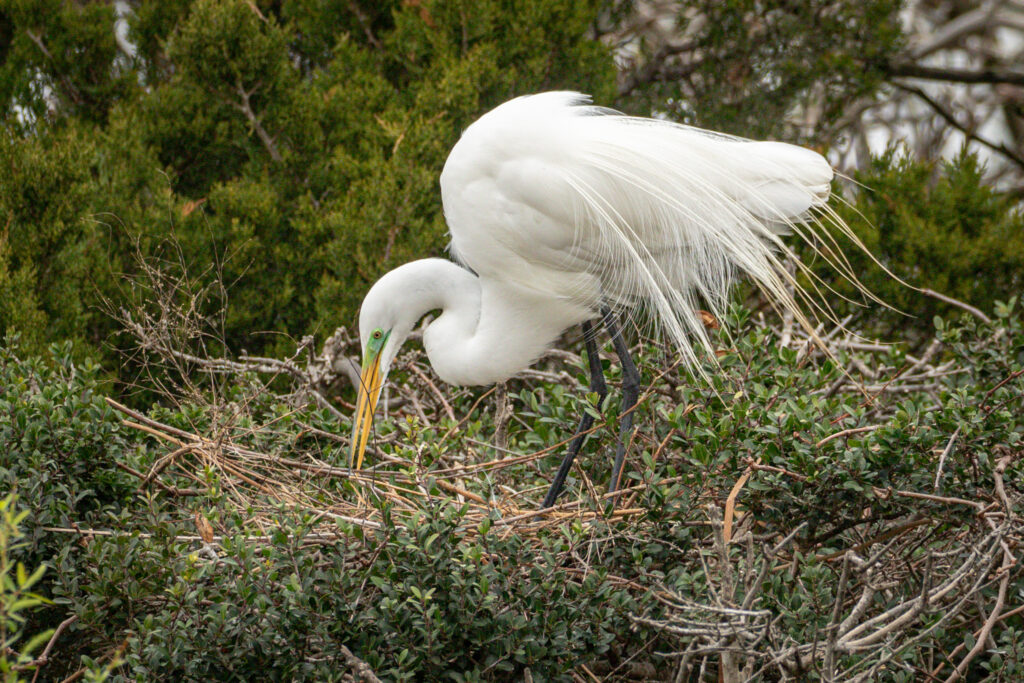 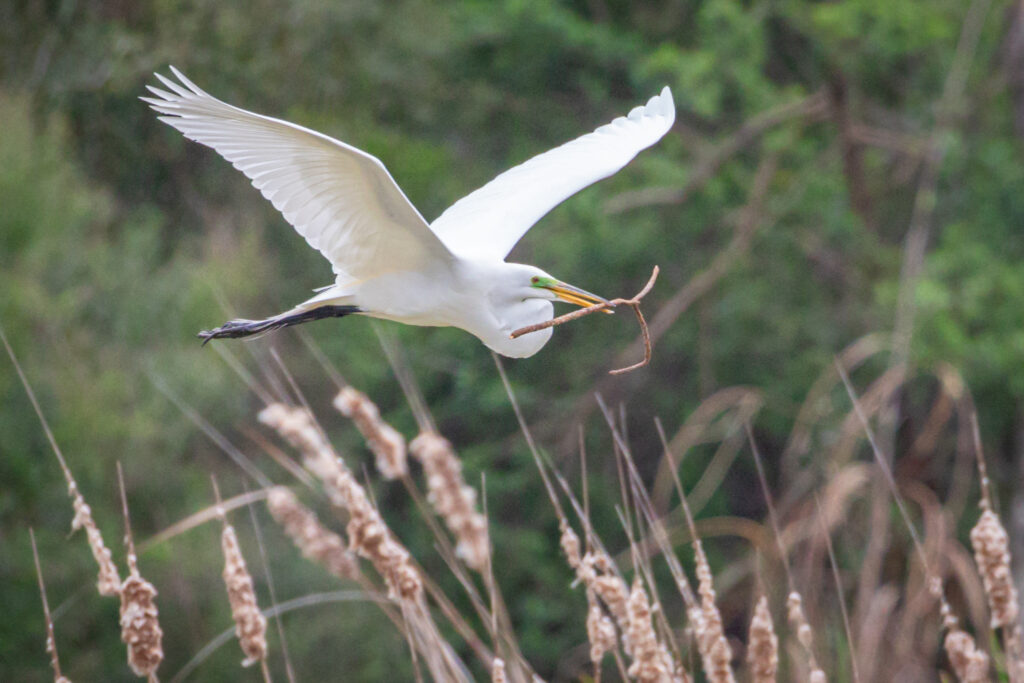 Not only did the Great Egrets display beautiful aigrettes and green lores, they also behaved differently.  They would extend their neck and head straight up into the air as high as they could in order to attract a mate. 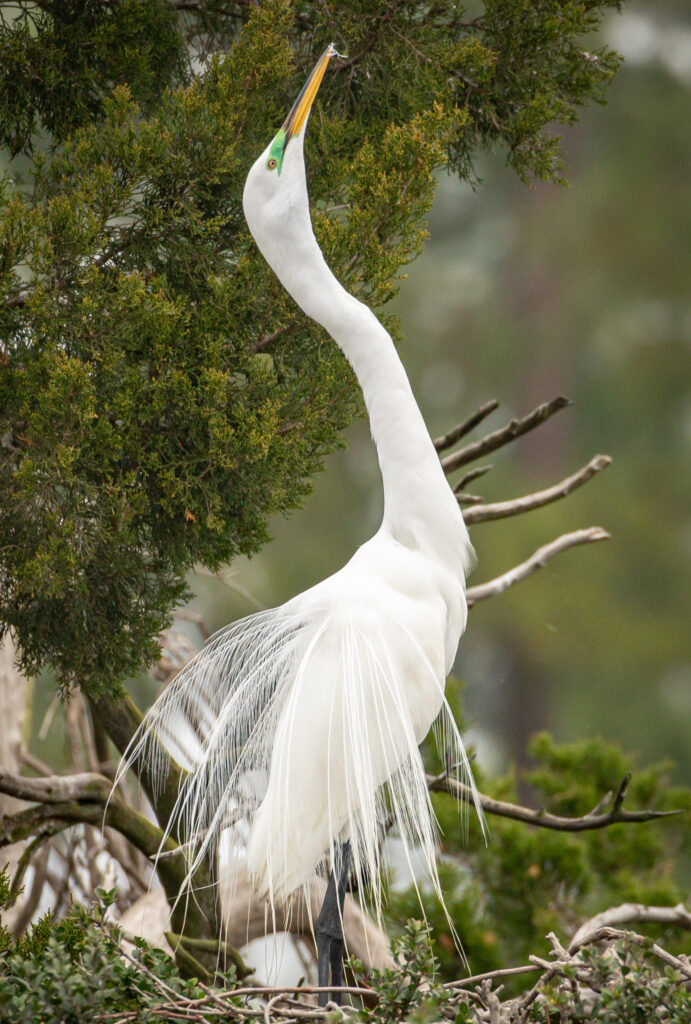 It was such a treat to see these beautiful birds in their breeding plumage and colors: by the time they reach the midwest (one was just reported the other day) they have lost these fascinating traits.

Your Egret pics are fantastic. Hope your brother is okay, sending positive thoughts. 🙂