On our recent travels to Arizona we saw over 150 different species of birds.   While there we saw 10 different species of hummers and we enjoyed watching them whenever we had the opportunity.  By contrast, in Chicagoland 99.9% of the hummingbirds we see are Ruby-throated Hummingbirds (once or twice a year another species pops up and birders clamor to see it).

Out in the wild we came across hummers fairly often and tried to get pictures of them.  Usually they were perched up high so my pics of them were usually from a distance and backlit, making for a poor pic.  Fortunately there were several locations that set up hummingbird feeders, which gave us easy access to the hummers – sometimes I was able to sit less than 5 feet from a feeder and snap pics.  The feeders brought in a wider variety than what we saw on the trail, too.  The downside of feeder viewing is that I captured parts of the feeders in most shots, revealing the “hand-of-man” in the pic.  In the end I guess I would rather have a good pic of the bird around a feeder than no pic at all.

We start off with a male Broad-billed.  Two things came to my attention first – the red bill and the brilliant blue/green body.  The bill is wide at the base, hence the name.  The brilliant red color made it easy to identify wherever we saw it. 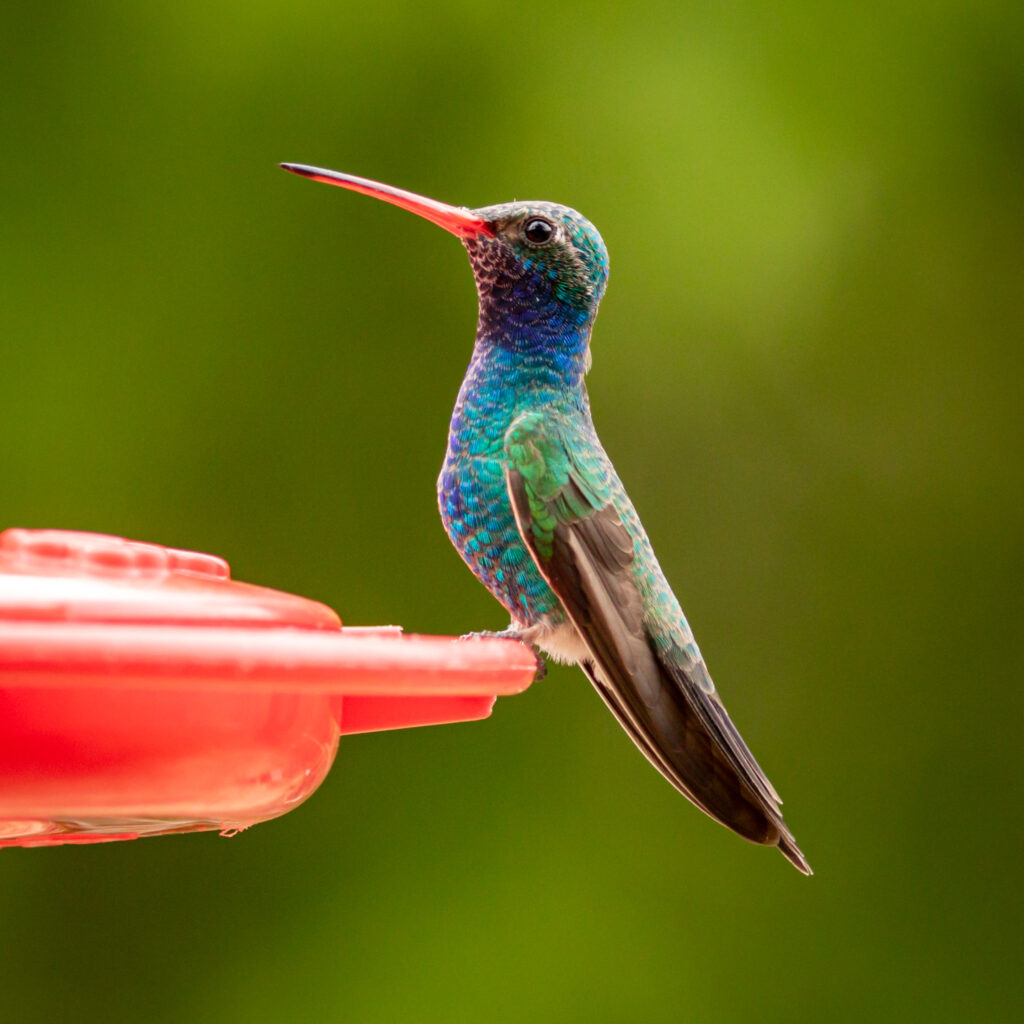 Here’s a closeup of the male Broad-billed.  Look at the detail in the tiny feathers and all the deep blue, purple and green colors.  I was right next to the feeder for this shot – the birds coming to the feeders were habituated to the presence of people so it didn’t seem to faze them at all. 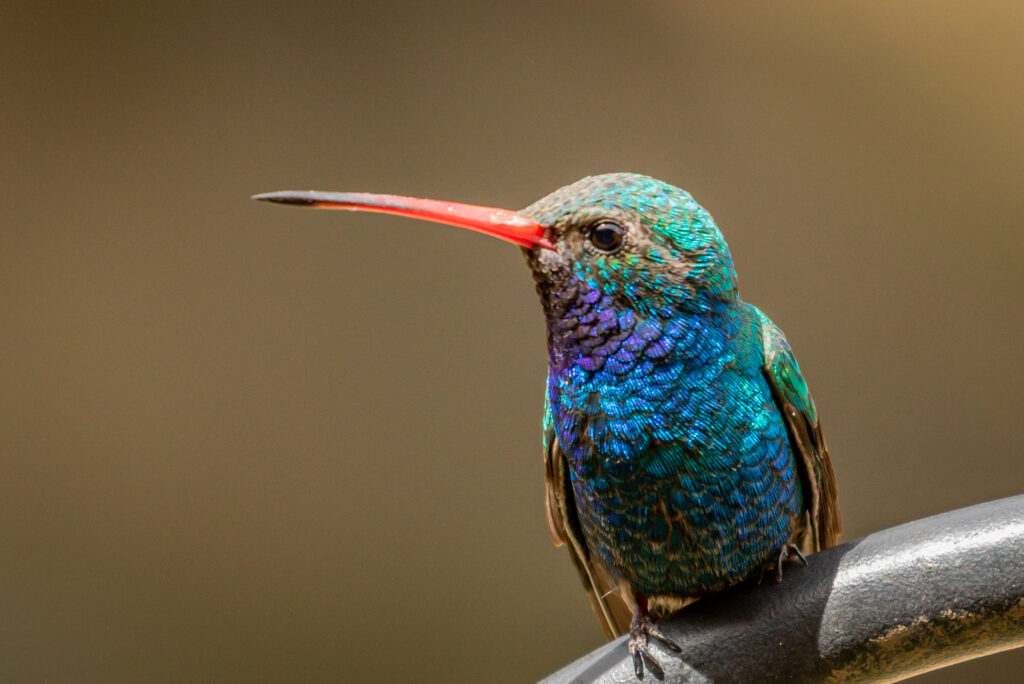 Getting a shot at a hummingbird in flight is always tricky.  I don’t think I’ve ever accomplished it in the wild as the birds move so quickly the camera can’t obtain a good focus.  As previously discussed, I focus on the side of the feeder I believe a bird will come to.  This gets the camera pretty close to the focal length it will need to get the BIF shot.  Even then I missed a lot of shots because the birds are moving around so fast.  Below is one pic of the male in flight.  This angle gives you a better look at the width of the bill at the base. 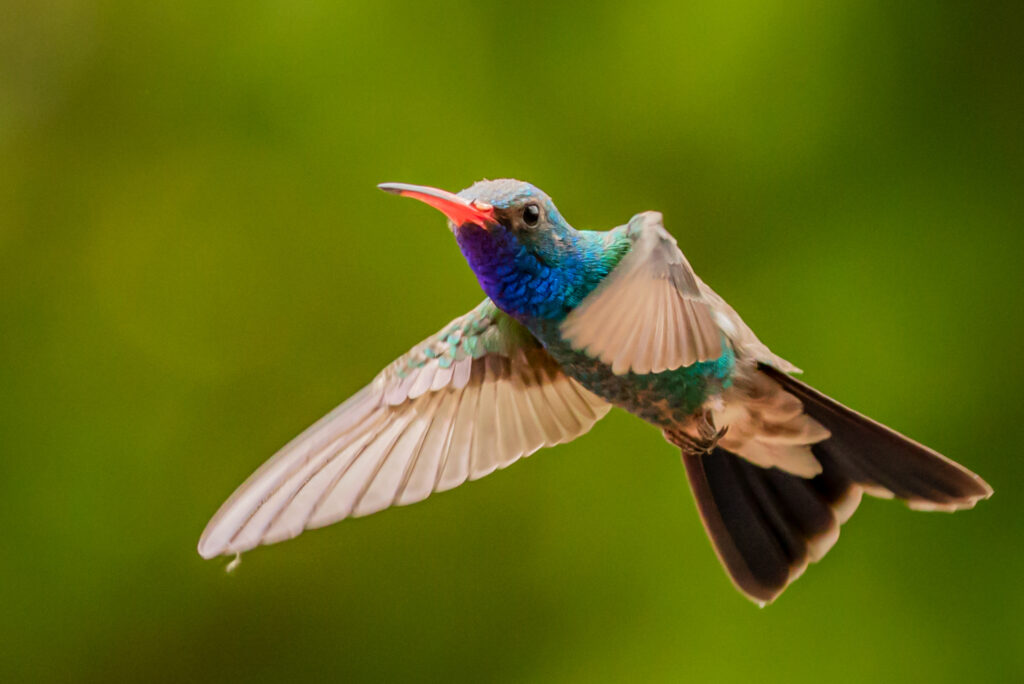 The female hummingbirds in the Arizona area are notoriously difficult to differentiate.  One bird monitor at the feeders half-joked to us that we shouldn’t even try.  They all have a buffy-white underside and a pale green back.  One exception to this rule was the female Broad-billed because it has some red on the underside of the bill.  Take a look for yourself. 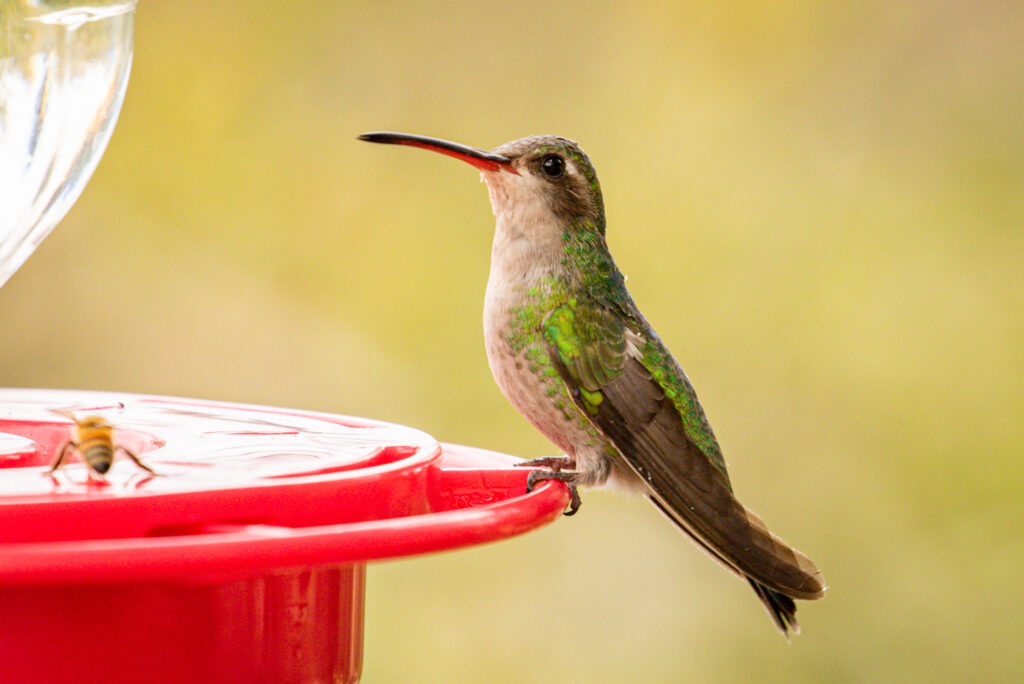 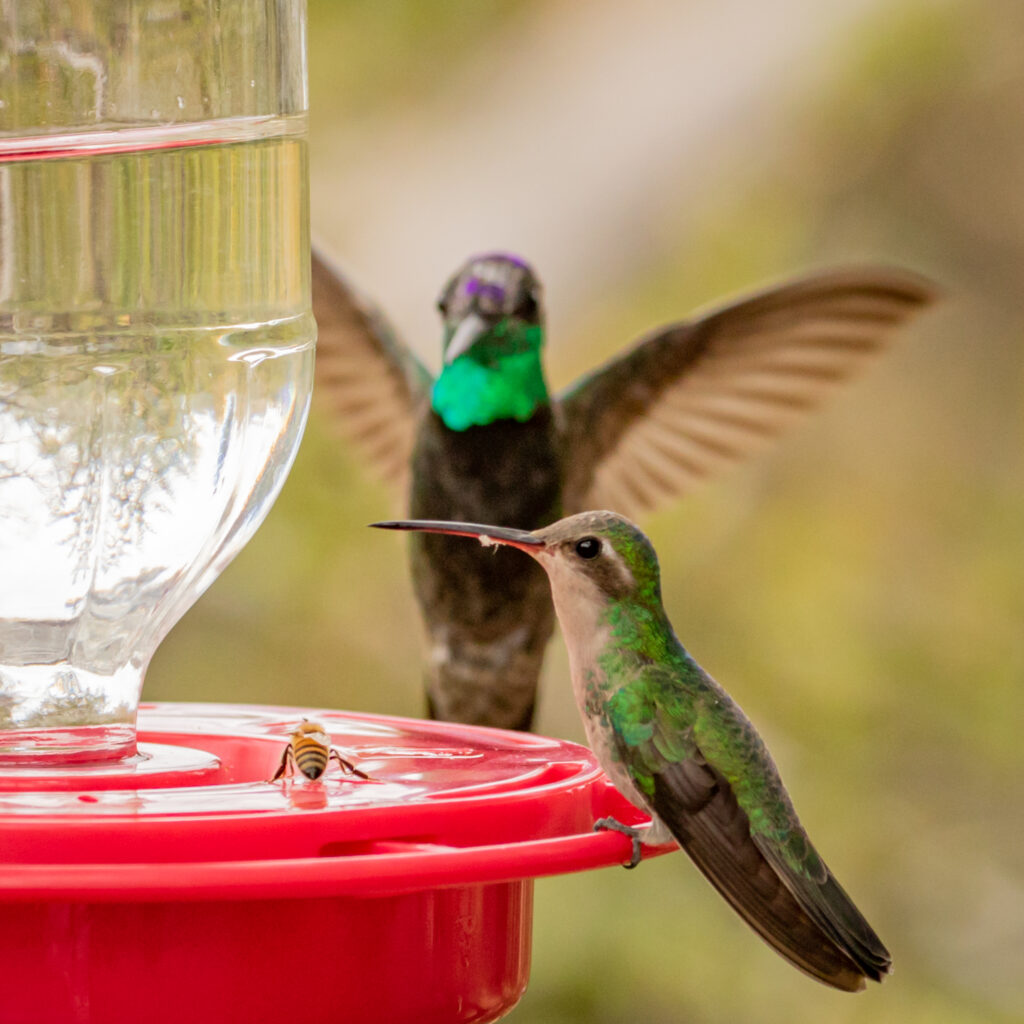 The final picture today didn’t start out very well.  It was overexposed with a major distraction to the left.  Here’s what it looked like after I cropped it (you can’t click on it as I didn’t enter it into the GBP database). 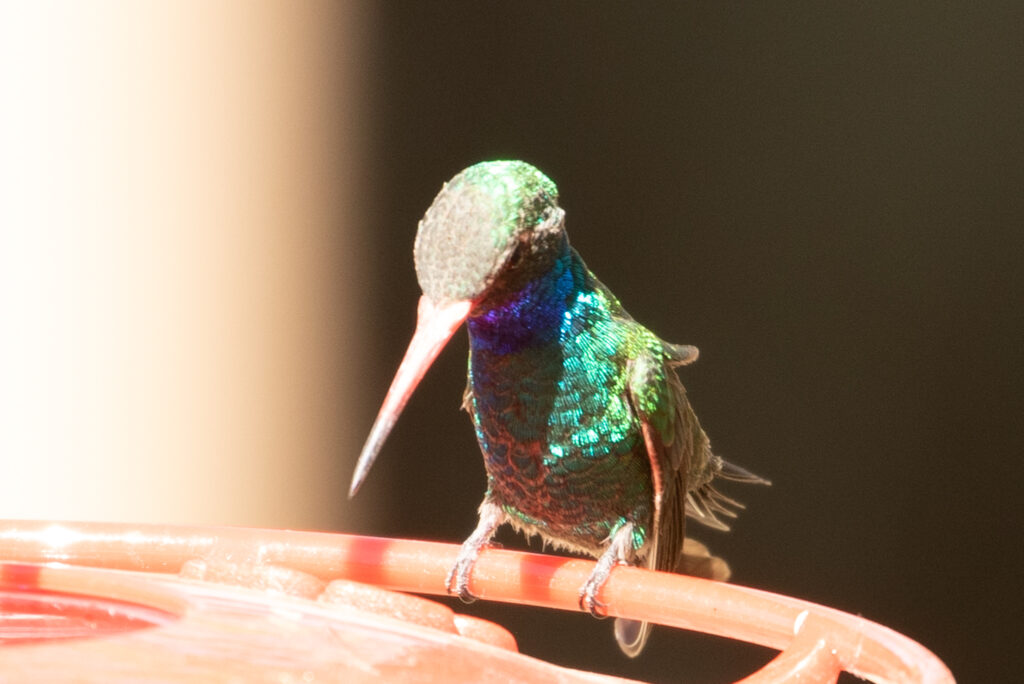 I started to “play” with the above picture to see I could process it into an image I liked.  I reduced the Exposure and bumped up the Contrast.  Then I eliminated the light streak down the left side.  Below is what I ended up with – an Artsy-Fartsy pic of the male Broad-billed Hummingbird.  I kind of like it – what do you think? 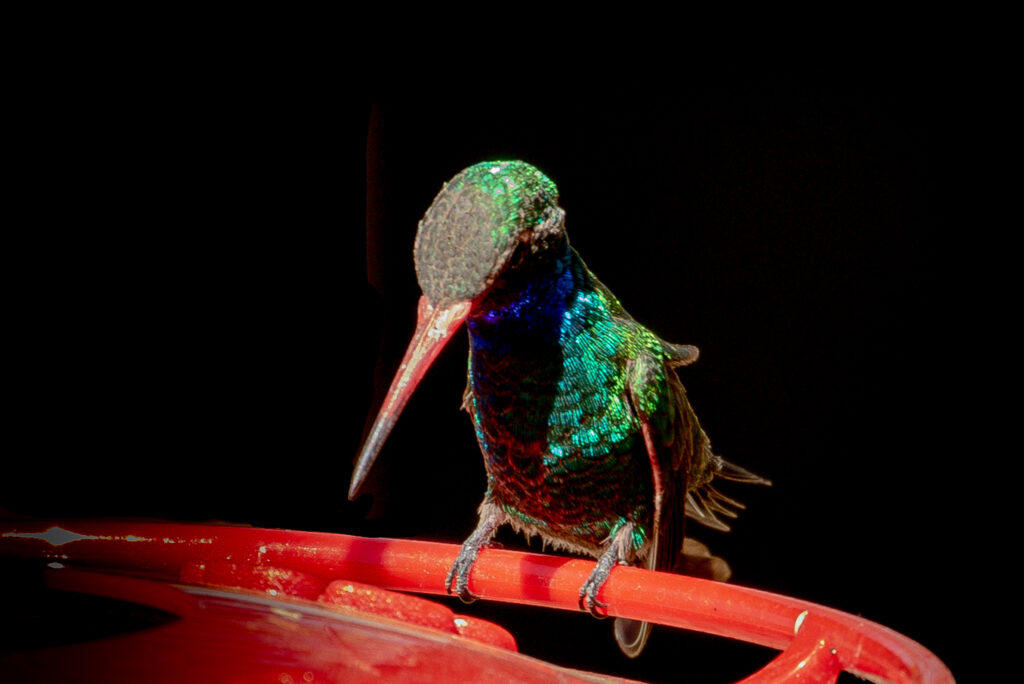 My backlog of photos to enter into GreatBirdPics has grown!  When I first started Mike’s Monday Pics, in an attempt to reduce the backlog, there were about 350 pics to upload.  Now there are over 1,330!  A complete and utter failure to accomplish my goal.  Or I have to just stop taking pictures of birds.  Nah!

If you would like to learn more about GreatBirdPics Click Here.  Members can post their own great bird pics, create an online gallery of their works, and receive emails about bird photography like this one.