A fluddle is a flat area that occasionally contains some shallow water.  Shorebirds are often found in areas around fluddles foraging for food.  Too much water and the fluddle is too deep for the birds to walk in and too little water usually dries them up.  But when the conditions are right, fluddles attract a wide variety of shorebirds.  Such was the case when we visited Montrose Beach fluddle a year ago.

Montrose Beach is perhaps a half-mile long with a dog park on one end and a pier at the other.  After a rainy day or two a fluddle develops on the beach about 50 yards away from Lake Michigan.  Beach goers walk across a little floating walkway to the beach and the shore of the lake and walk right by or over the fluddle (depending on how deep it is).  By late morning most of the shorebirds have moved on due to the pedestrian traffic nearby but if you get there early enough you can catch a good variety of shorebirds.

Some shorebirds are tough to identify because they tend to be similar to other species.  One we had no trouble with was the Willet.  With its long greenish legs and larger body, the Willet was easy to spot and photograph. 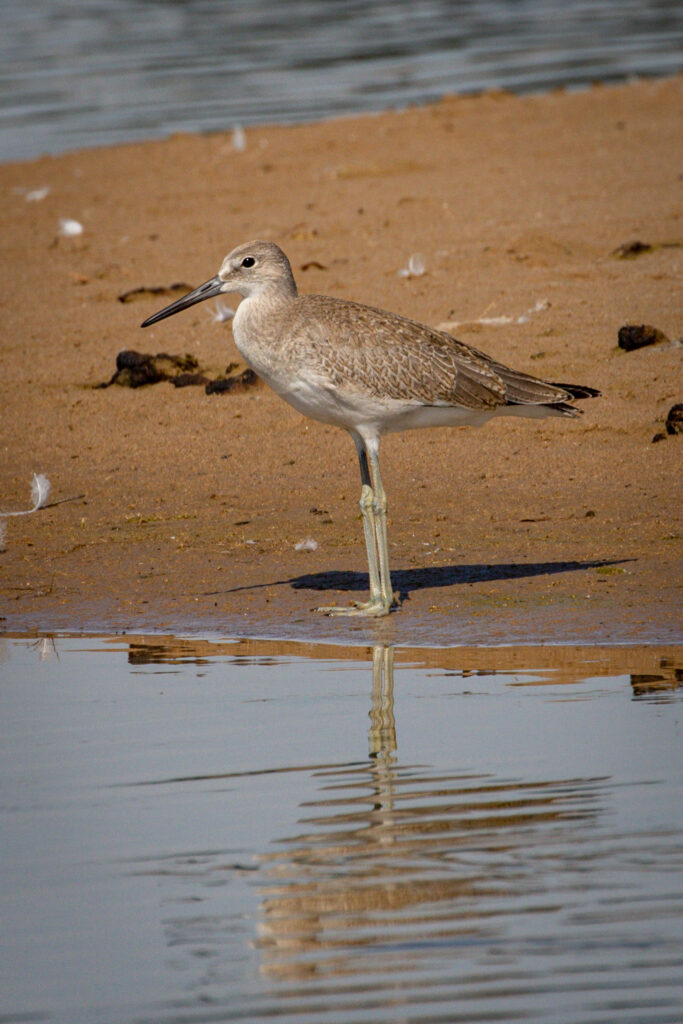 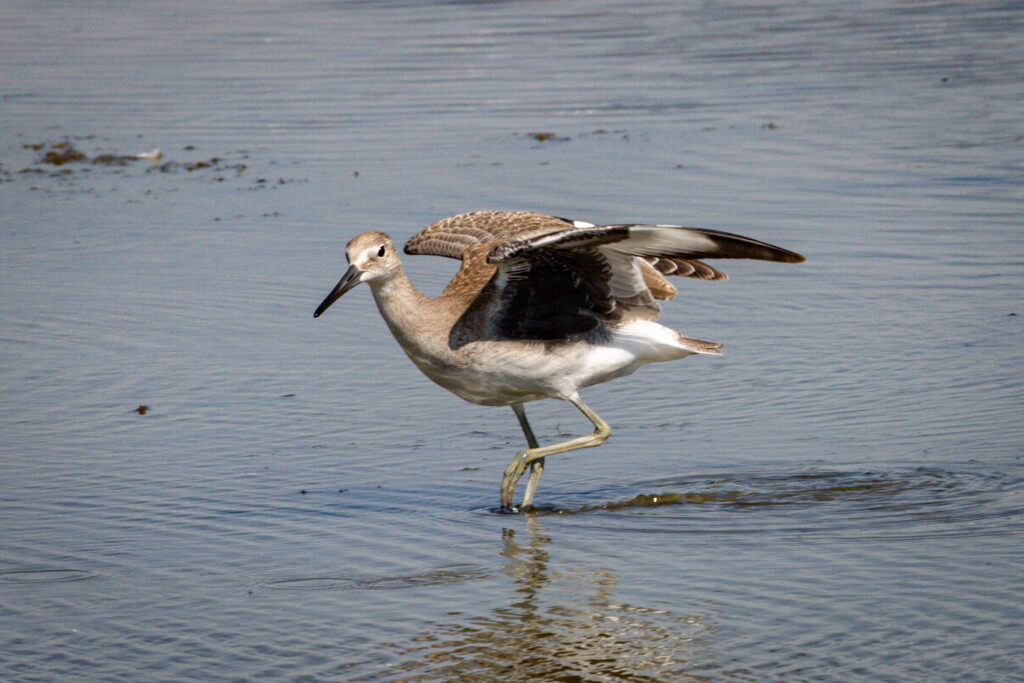 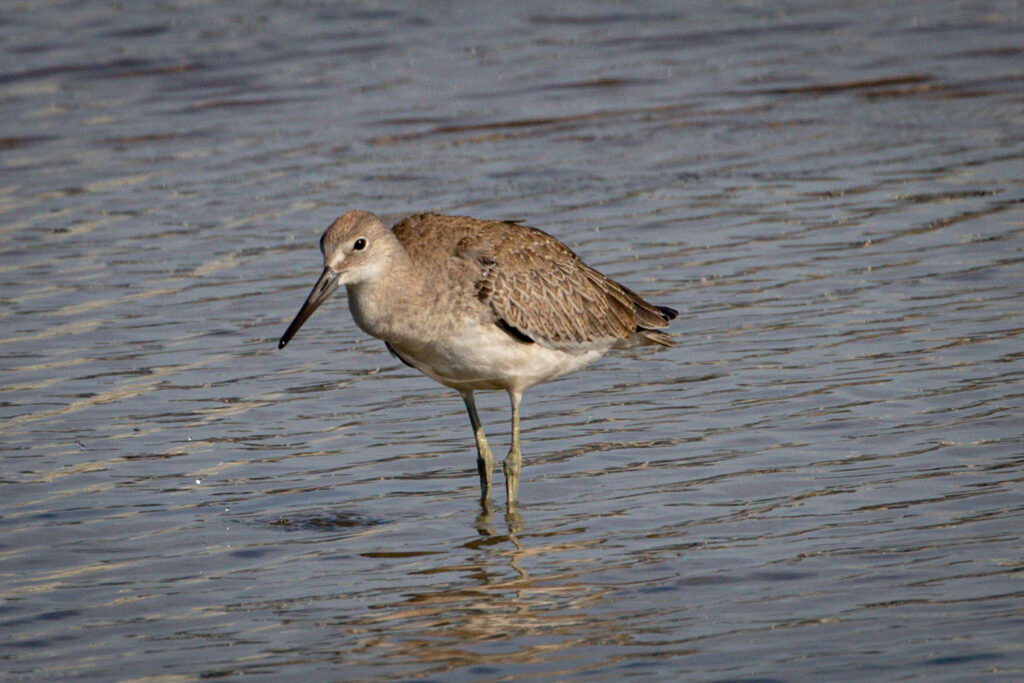 The Semipalmated Plover is a little tougher to identify because they look so much like Killdeer.  The trick is to count the number of black bands around the neck – the Killdeer have two black bands and he Plover only has one.  As a reminder, “semipalmated” means that there is some webbing between the toes of the bird, although not completely webbed like a Mallard.  I think these are the cutest little things! 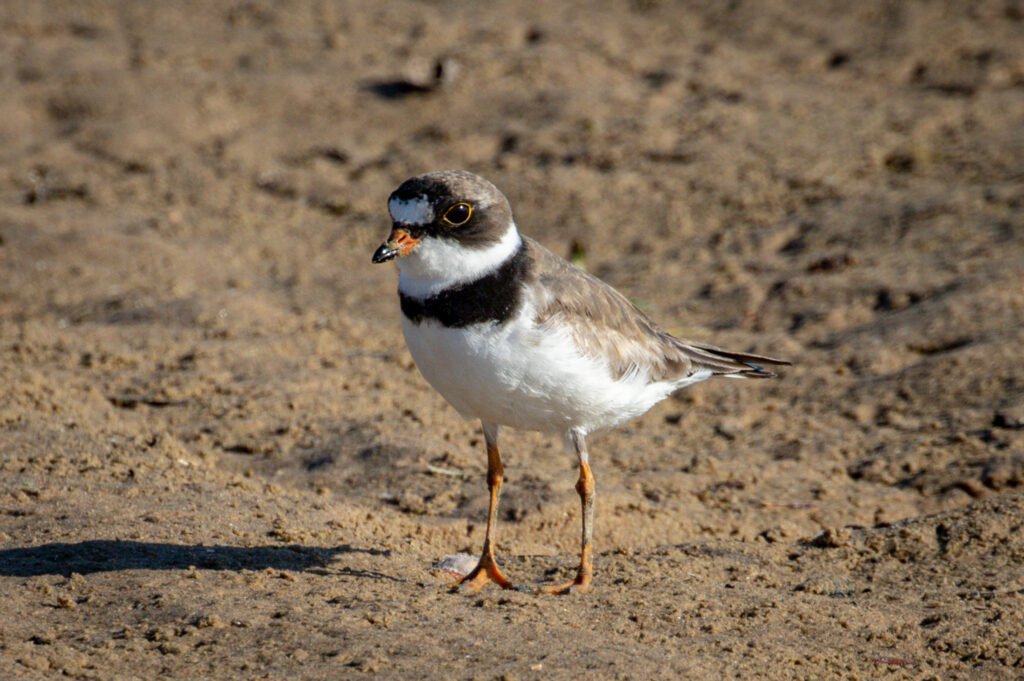 In the small group of Semipalmated Plovers below note the female on the left, which is drabber and lacks the black bands. 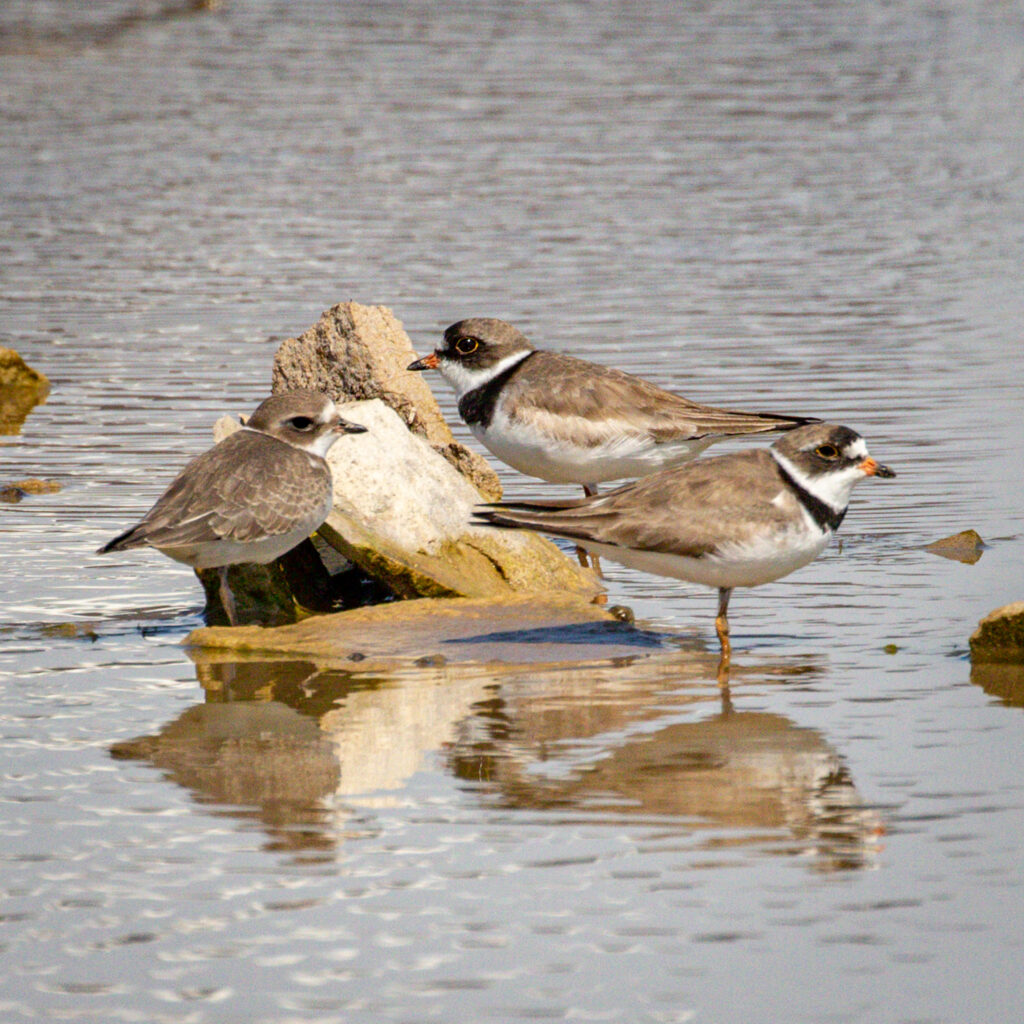 The only resemblance between the above Semipalmated Plovers above and the Semipalmated Sandpiper below would be the webbed feet (which we can’t see due to the water). 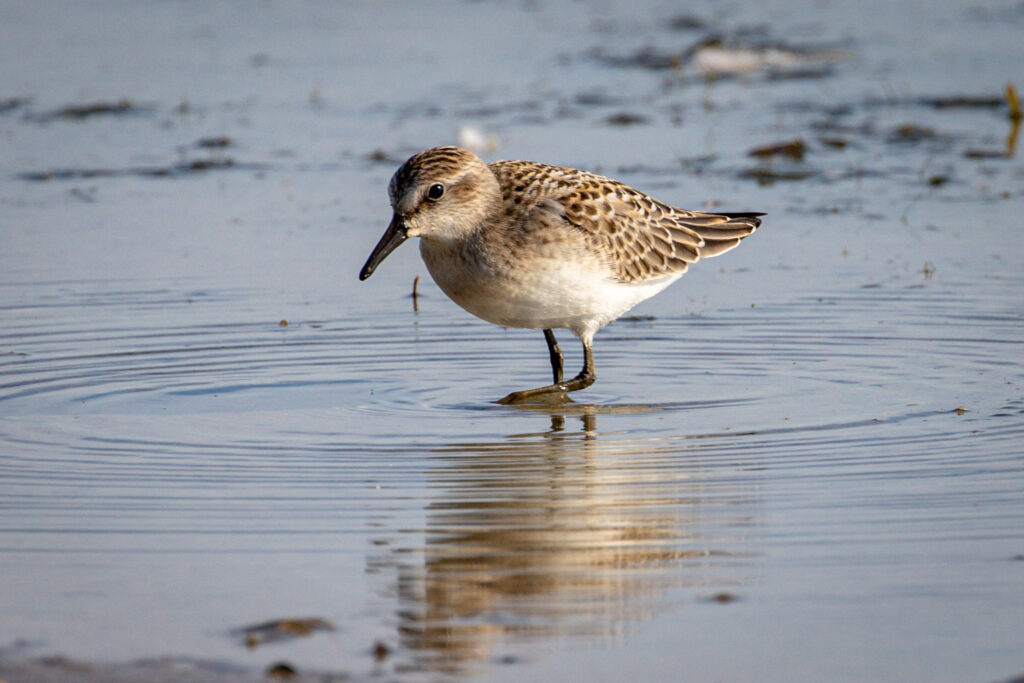 We also saw a small group of Pectoral Sandpipers there.  At first place they look like many of the other sandpipers running around but on closer inspection you’ll see a clearly delineated line remarking the darker breast colors from the white body (compare to the Semipalmated Sandpiper above in which the darker colors slowly blend in with the white body). 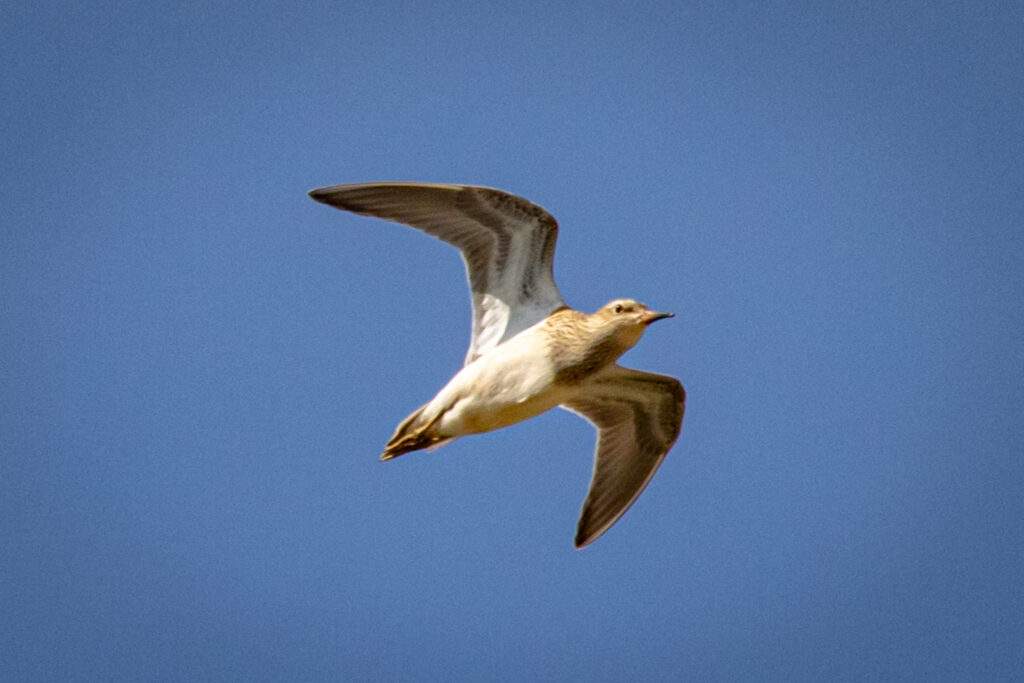 This next shot of the Pectoral Sandpiper would be hard to ID with its back toward the camera (we saw it before it turned). 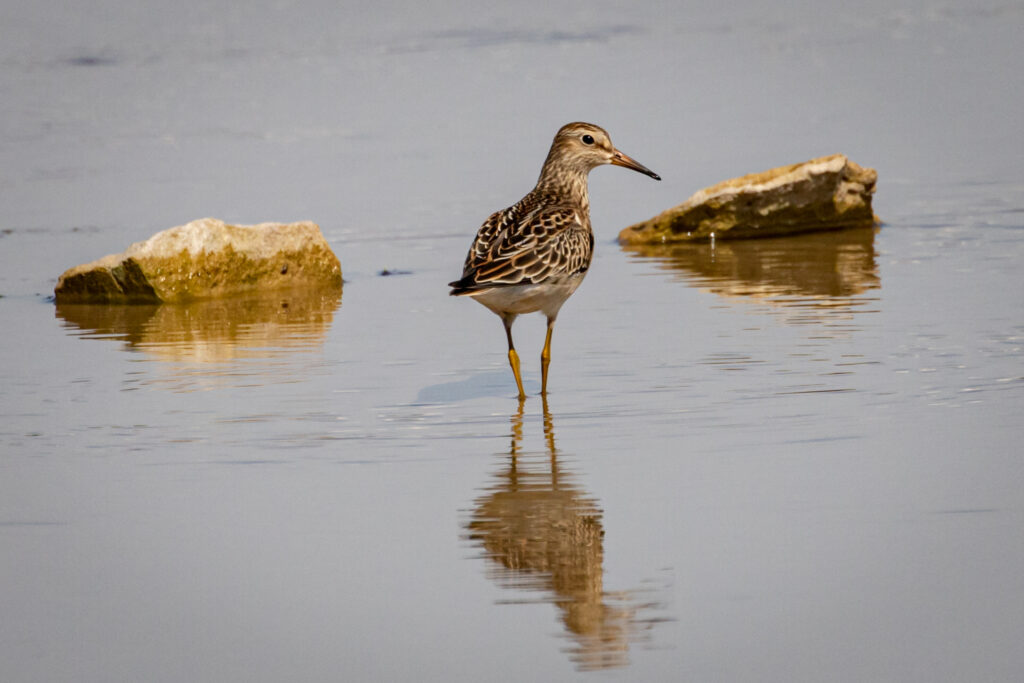 Of course no trip to the beach is complete without a gull sighting.  We saw one immature Ring-billed Gull standing contentedly in the fluddle for no apparent reason. 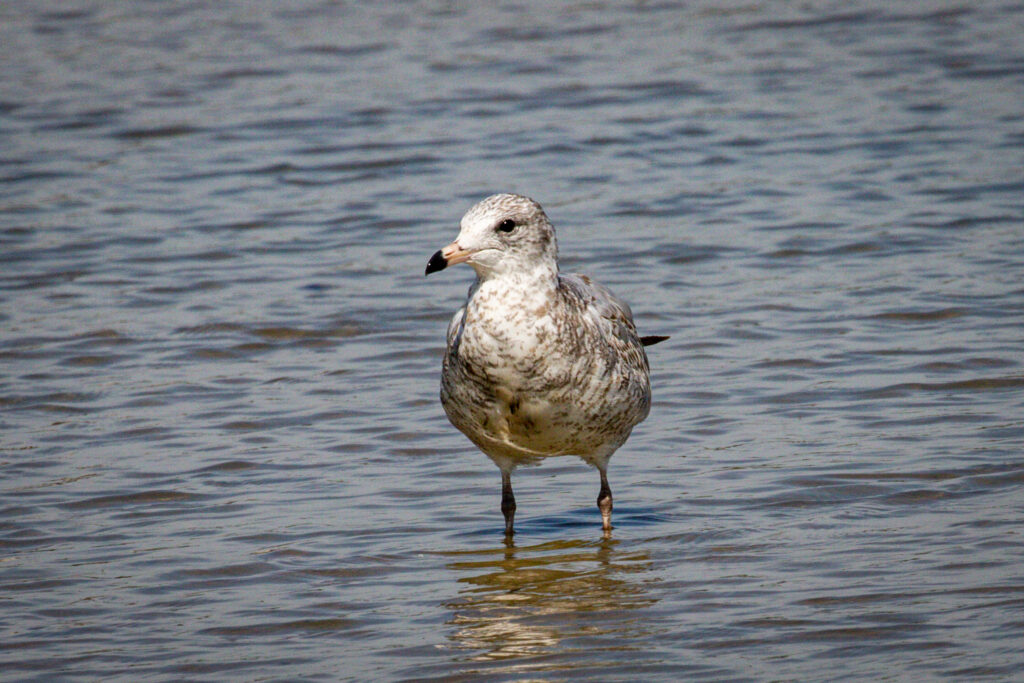 There is a sad turn to this story.  You’ve heard about the famous Monty and Rose, the mating pair of Piping Plovers that have captivated Chicagoans’ hearts.  In order to provide a large nesting zone for Monty and Rose, the Park District had to relocate the beach volleyball courts to where the fluddle used to exist.  We have not been back down there to see if another fluddle has formed naturally – I hope so, for the sake of the shorebirds.

If you would like to learn more about GreatBirdPics.com CLICK HERE.  Members can post their own Great Bird Pics, communicate with other members, and receive regular emails about bird photography.