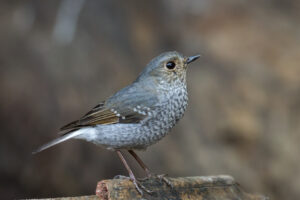 This is Day 13 of a 19-day birding tour of Thailand; it was a private group arranged through Field Guides, adhering to their typical itinerary.  The pictures in this post are just some of the many Thailand pictures I’ve uploaded to GreatBirdPic.com.   Check out the site before you leave: see the Latest Pics uploaded by our members or read the About GPB to find out more about the site.  You are welcome to join if you enjoy bird photography.

Into Doi Inthanon National Park, one of the largest parks in Thailand, for a full day of birding.  We went straight to the top and began our day seeing some beautiful Green-tailed Sunbirds in the flowers.  First the male, then the female: 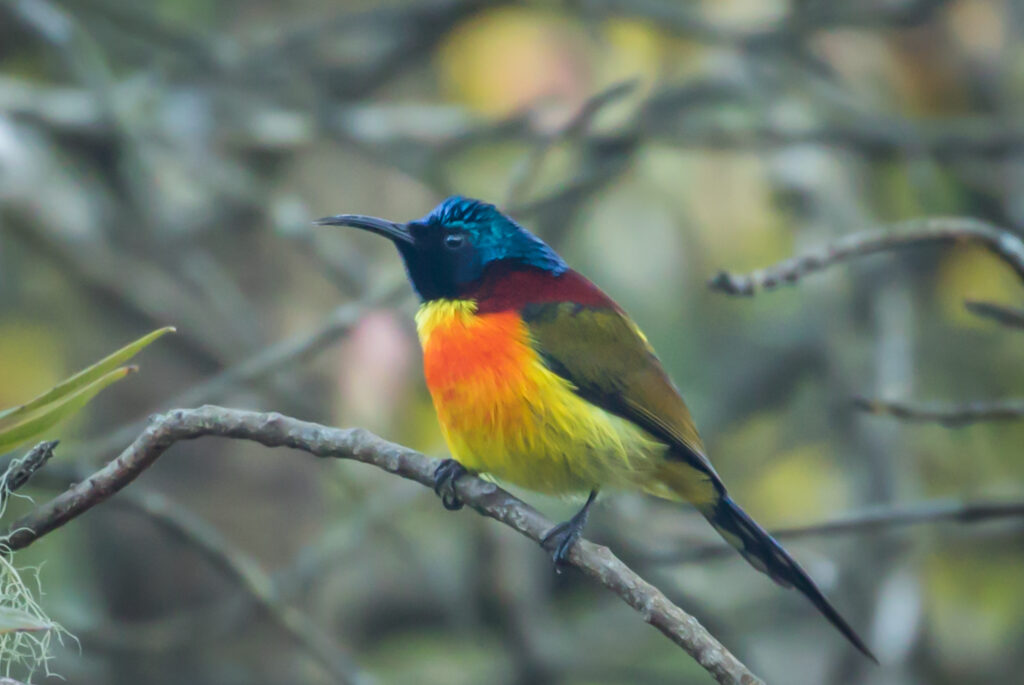 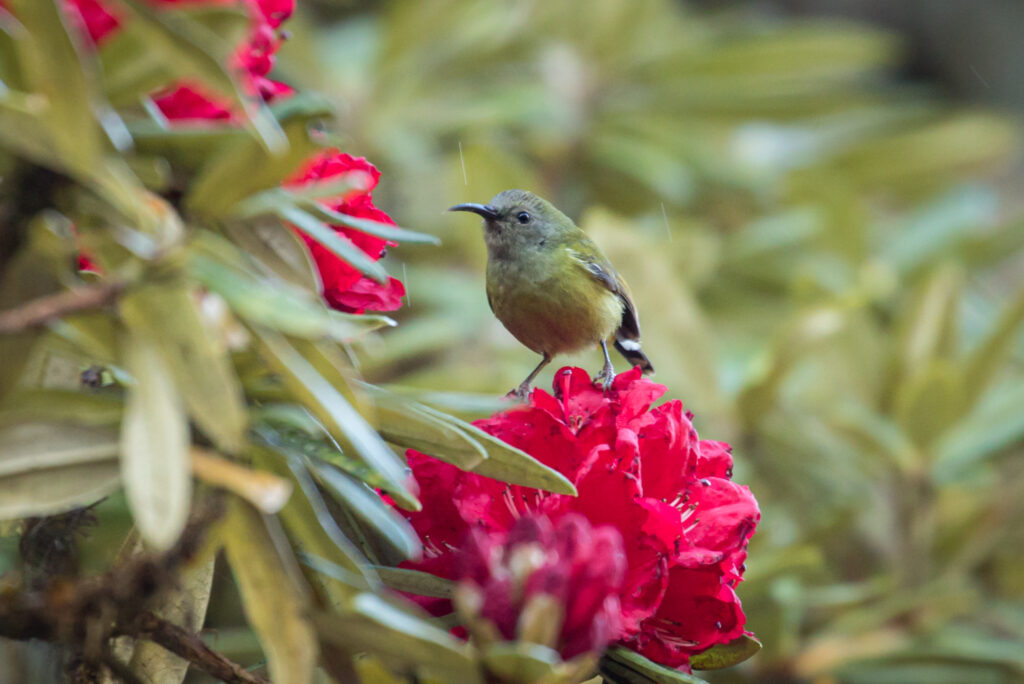 Just down the road, as we walked along we spotted two birds with interesting eyes.  First was the Clicking Shrike-Babbler: 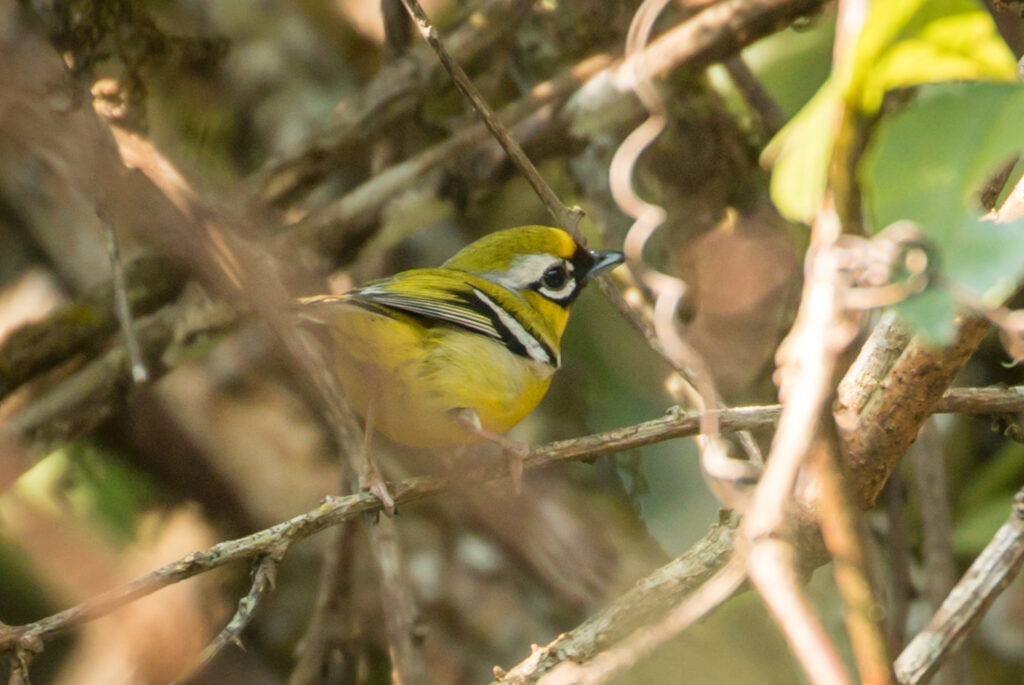 The next one with interesting eyes was a couple of Chinese White-eyes: 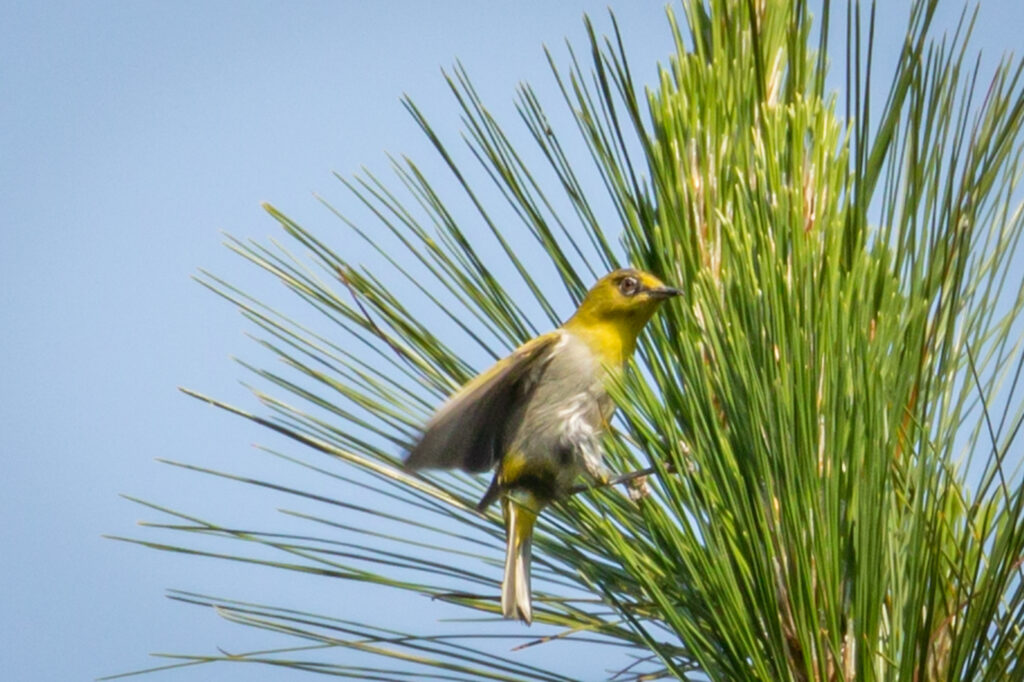 We took off and traveled down a narrow, steep trail.  This was actually quite unusual for us as we spent most of our time birding right on the road.  Deep in the forest we saw a couple of interesting birds, but it was so dense and dark I couldn’t get pictures of most of them.  However our trip was worth it when we saw a Golden-fronted Barbet foraging nearby: 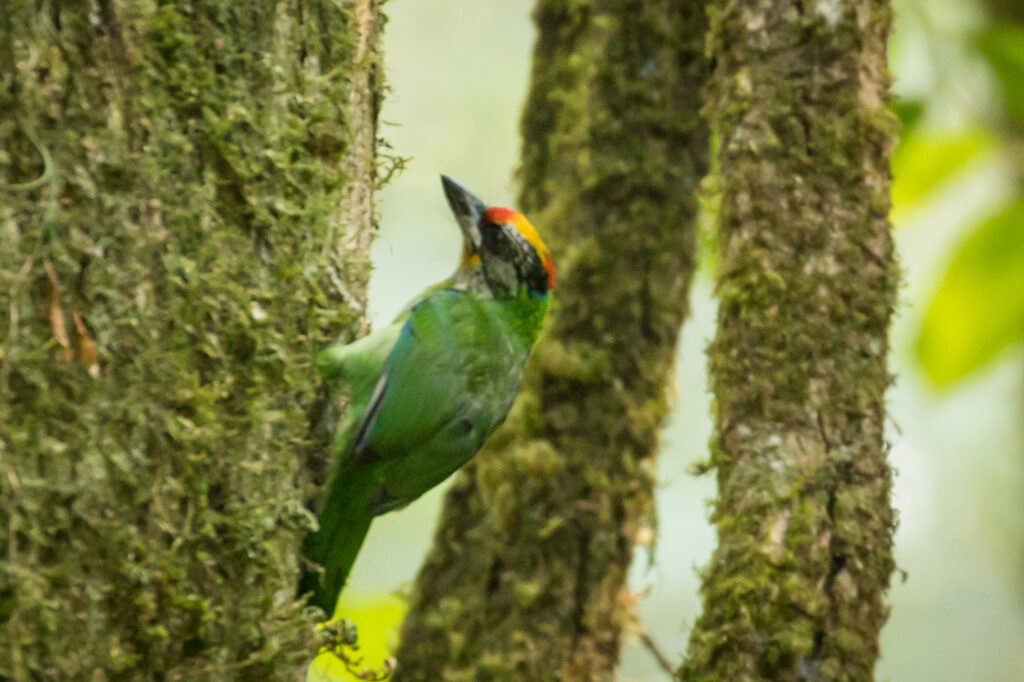 As we came back out of the forest I spotted this Flavescent Bulbul perched atop a nearby tree: 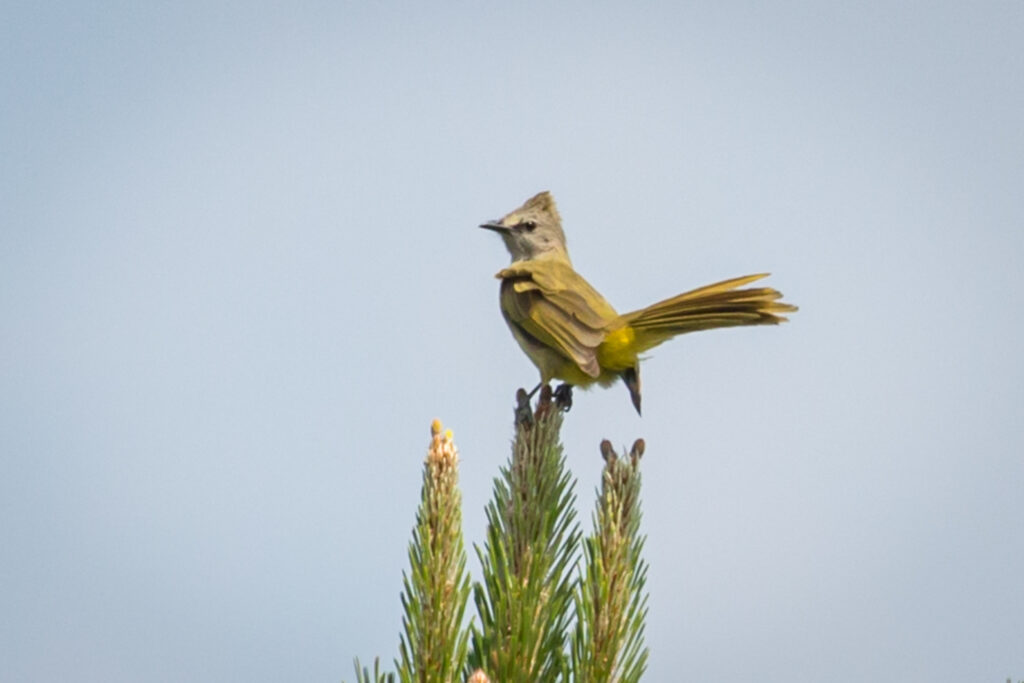 By now it was time for a break so we headed to the visitor station and looked for the restrooms.  The Men’s Room seemed to be well marked: 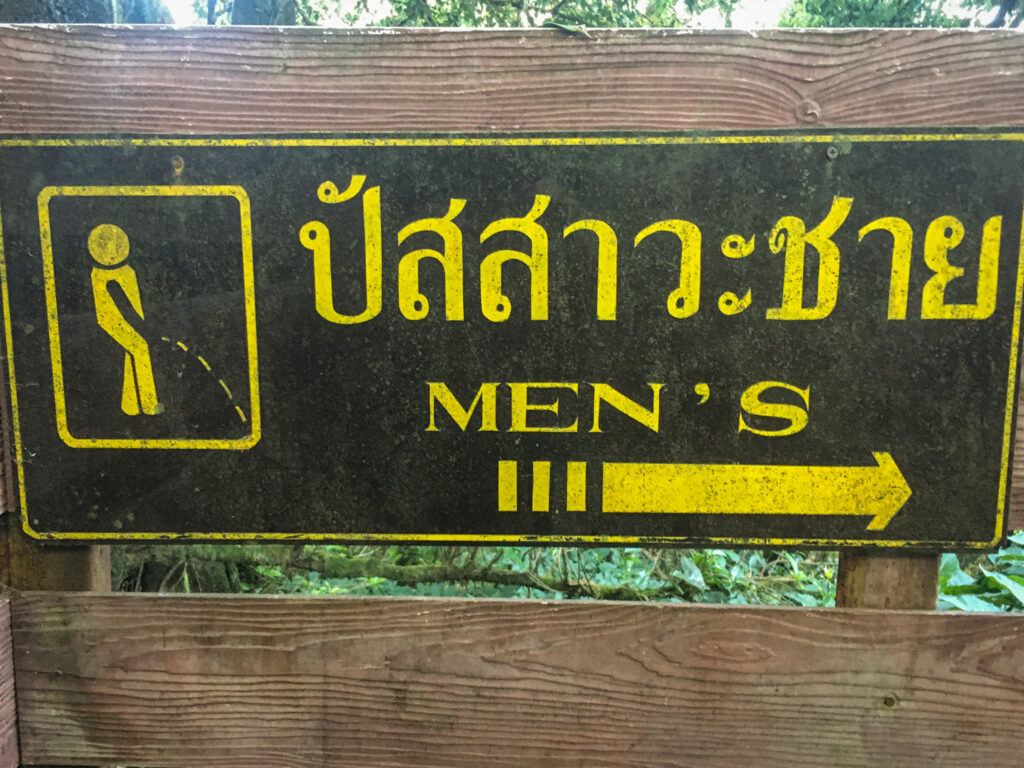 After washing my hands, we set off for the one of the most productive areas of the trip.  A blind was set up for us not far from a residential area.  Logs and earthenware were spread out in front of the black plastic netting we were accustomed to.  Live mealworms were spread out and soon the birds came.  A lot of birds came.  This actually caused some confusion in the group as we compared notes afterward.  Photos on cameras were studied with timestamps, individual notes were reviewed, and recollections of which bird appeared when and where were shared.  It was not until later that night were we able to sort it all out and properly identify each species that made an appearance.  Below are pictures of those species: 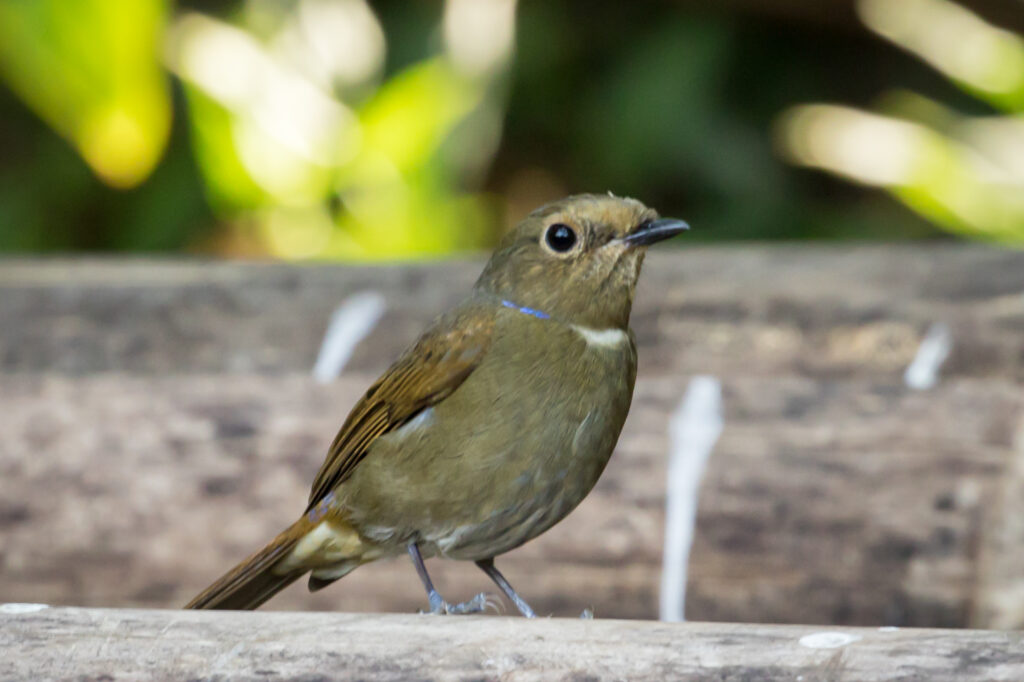 This Dark-sided Thrush, along with the Scaly Thrush (shown further down) caused the most conversation.  They were somewhat similar and came and went several times. 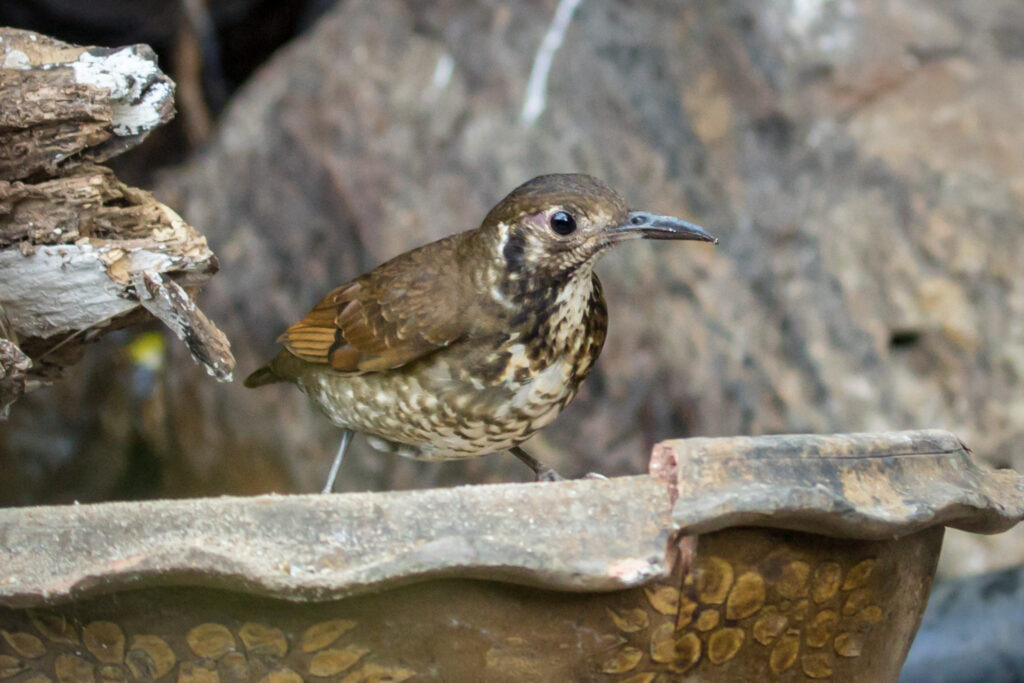 Another view of the Dark-sided Thrush: 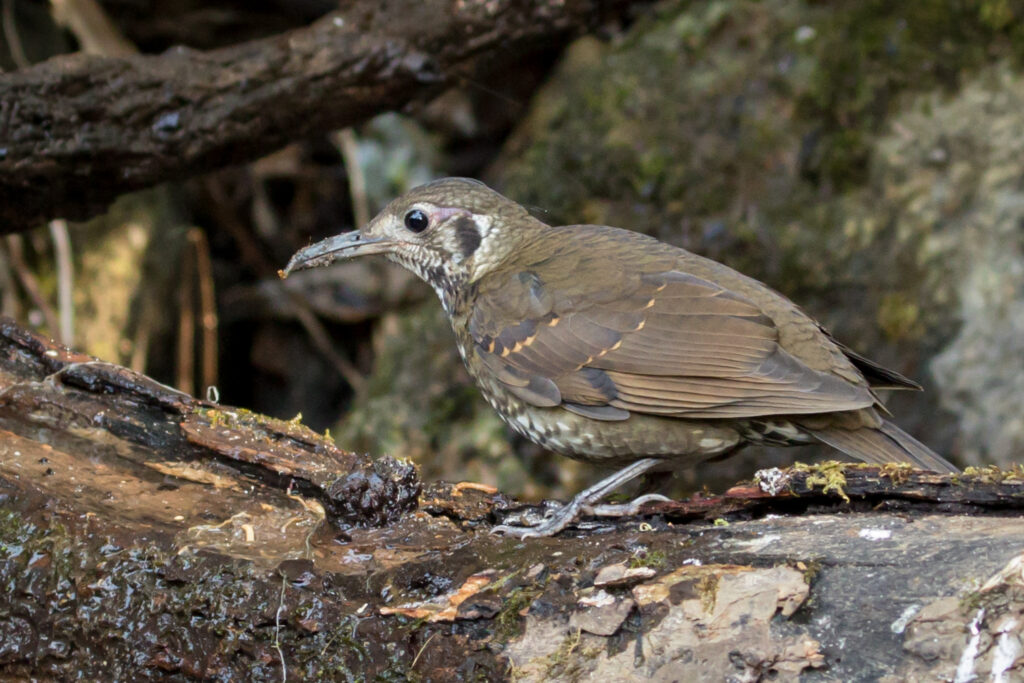 A female Vivid Niltava flitted in and out quickly – some missed it: 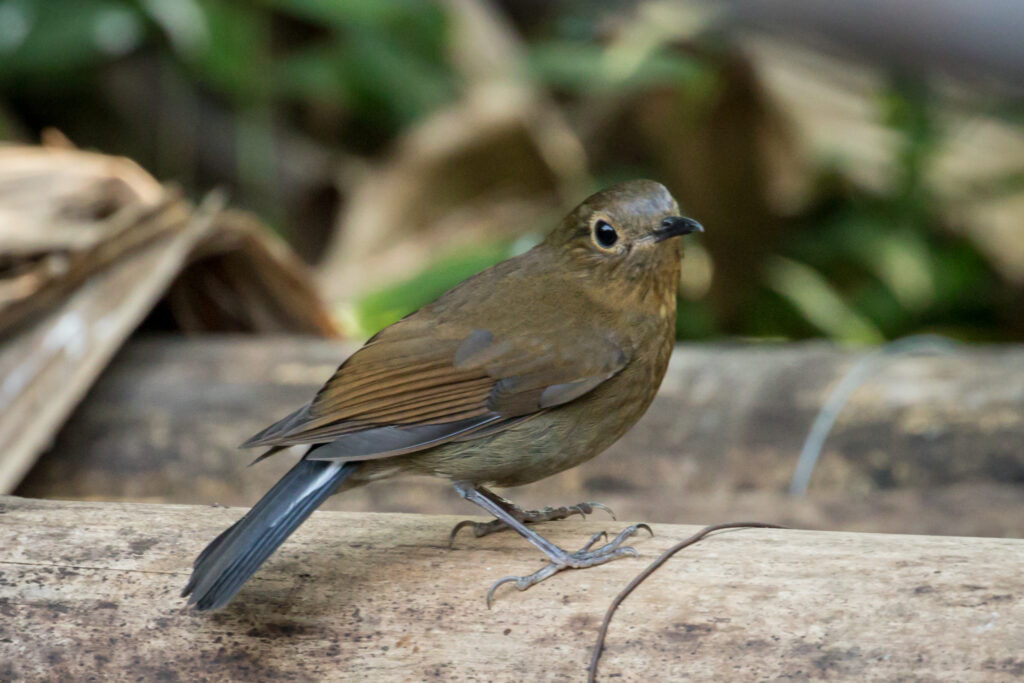 A Plumbeous Redstart did come and pose for awhile, affording all of good views of this interesting looking bird: 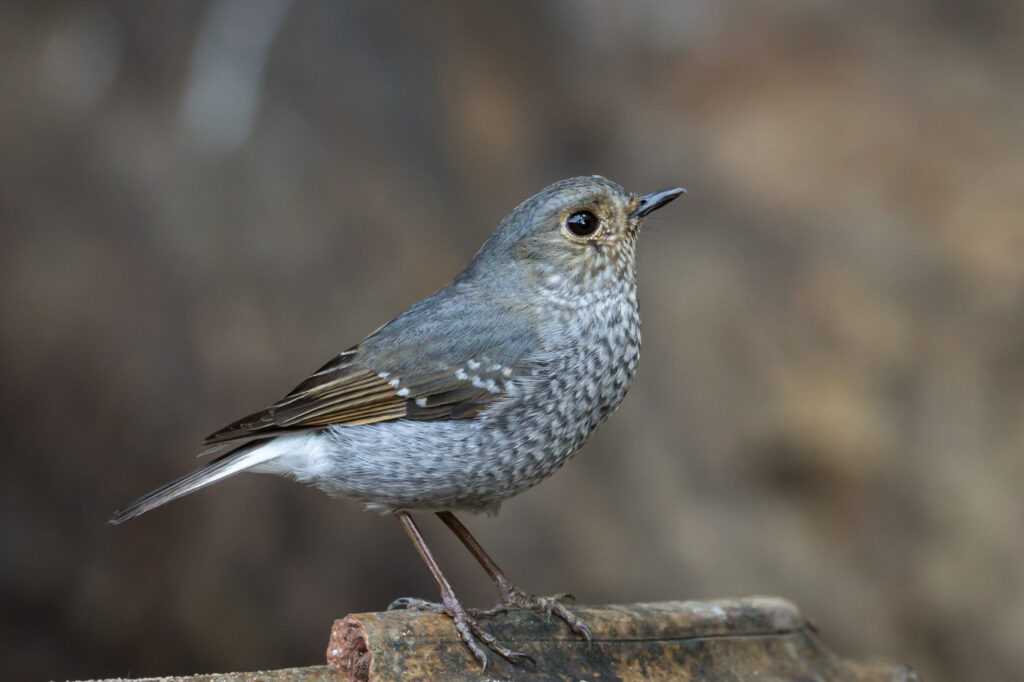 The Plumbeous Redstart flashed its white tail feathers several times.  We weren’t sure if this was a breeding trait or an attempt to distract us away from a nest: 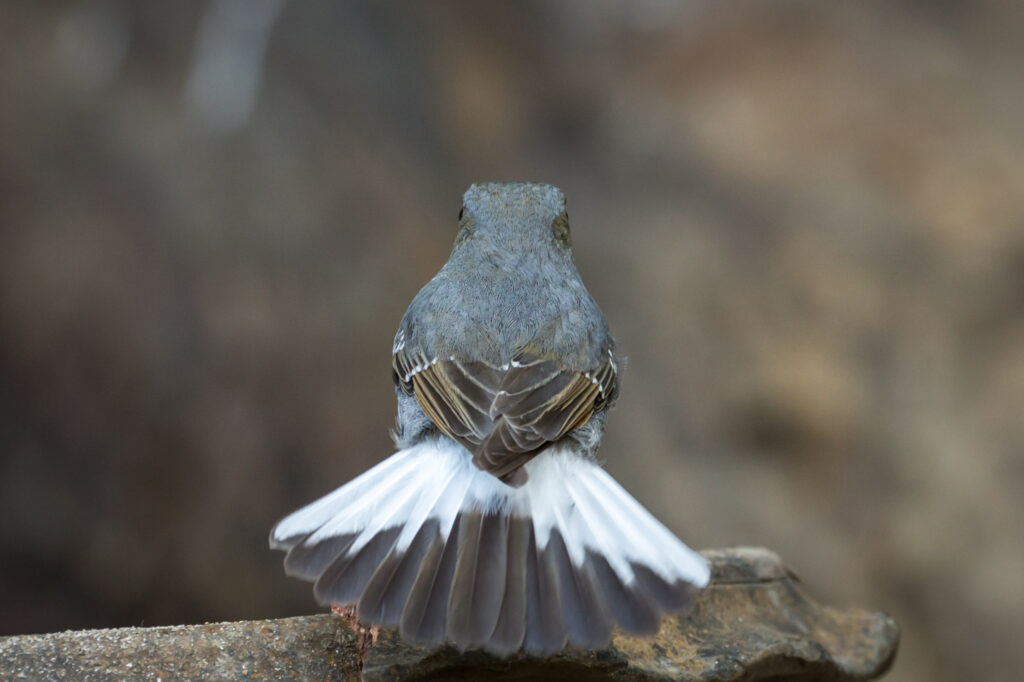 The next bird to fly in was a female Chinese Blue Flycatcher.  It’s hard to see the blue in this, but the field guide shows the male to be a vivid blue back: 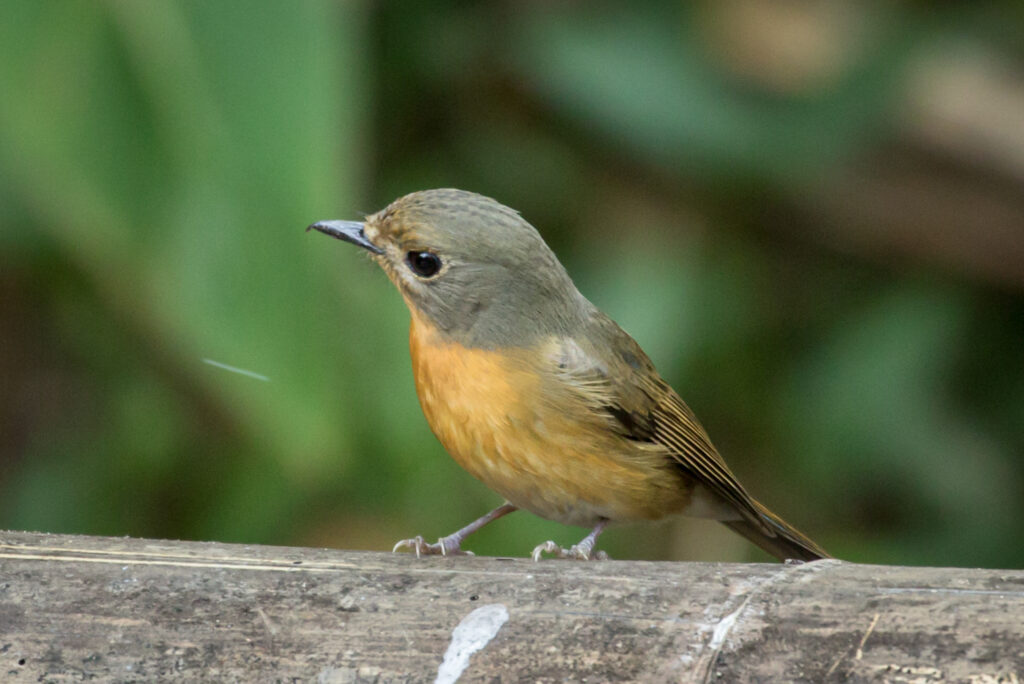 The other bird which caused some confusion was the Scaly Thrush.  At first blush it looks similar to the Dark-sided Thrush seen earlier.  On closer inspection the feathers do look more like larger scales instead of dark spots.  A quite beautiful bird with lots of dark colors.  Some shots of the Scaly Thrush: 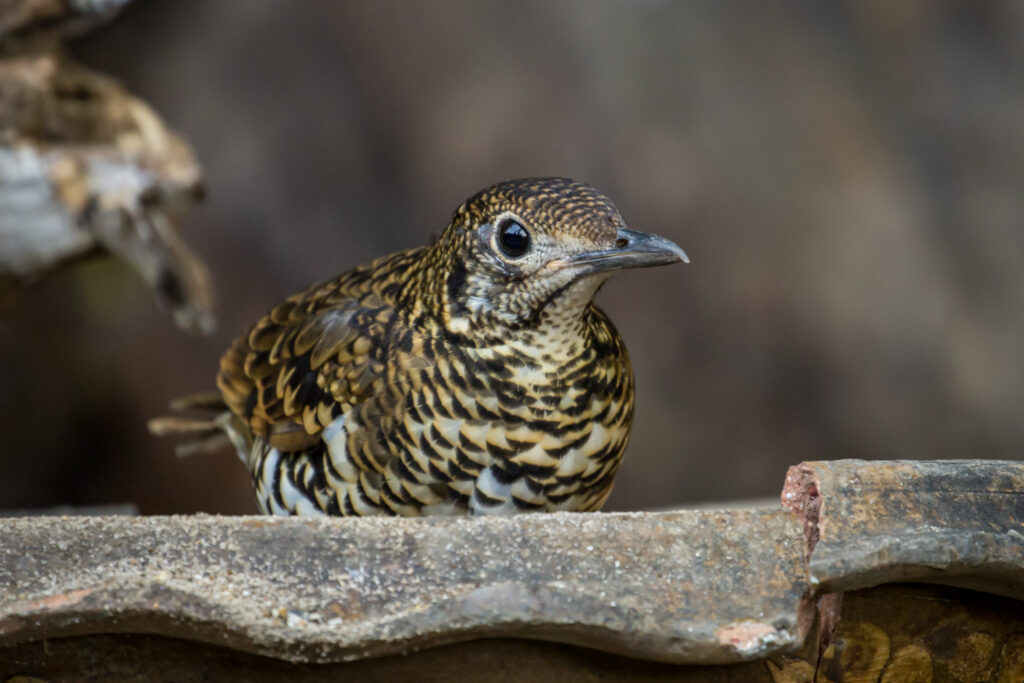 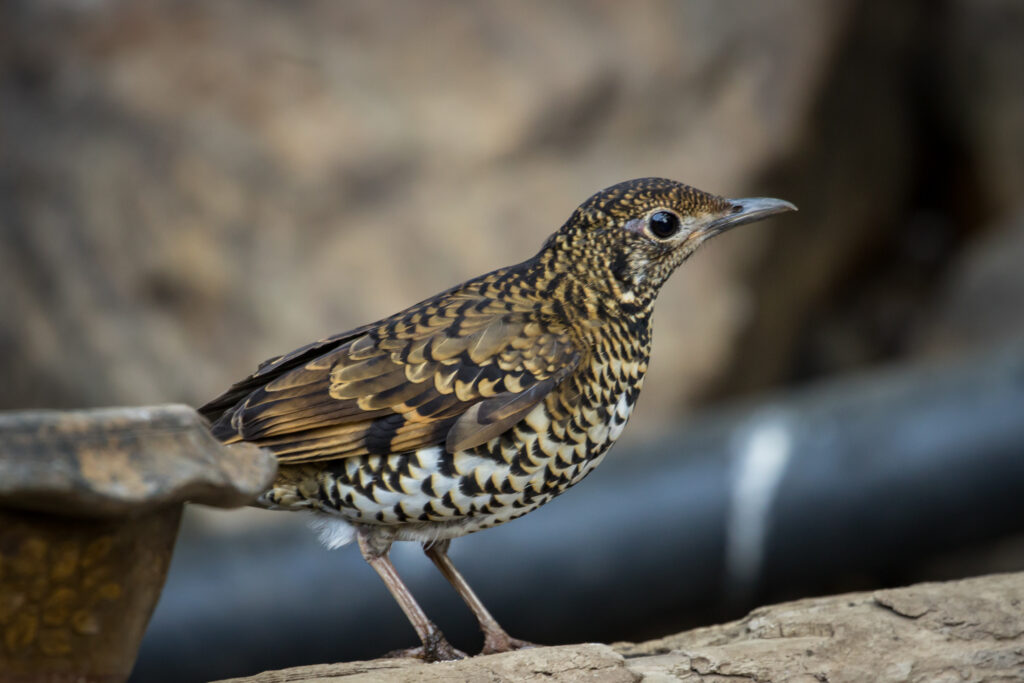 As a side note, as indicated above we tended to see the females (Vivid Niltava, Chinese Blue Flycatcher, Plumbeous Redstart) than the showy males.  This was true not only on this day but most days.  There are two possible explanations for this.  First possible reason for the lack of males was the drought the country was experiencing.  This depressed the overall number of birds seen.  Another possible reason was that the males already left to migrate to their breeding areas.  Being the end of February, the breeding areas to the north would be warming up in a  few months so the males were probably on their way to stake out a good site.

My brother Xwinger always sends me pictures of flowers so I though I would include these beautiful wild flowers we saw along the way: 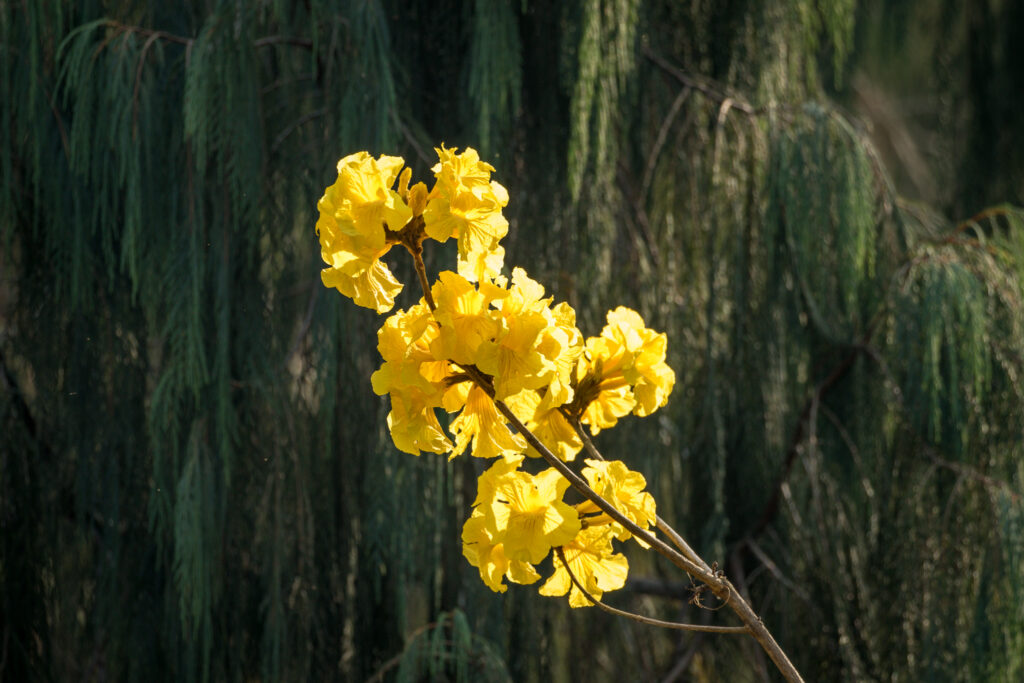 We headed back toward our hotel at the end of another great birding day in Thailand.  Our guide Dave pointed out the valley below and the mountain spine we would be ascending the next day: 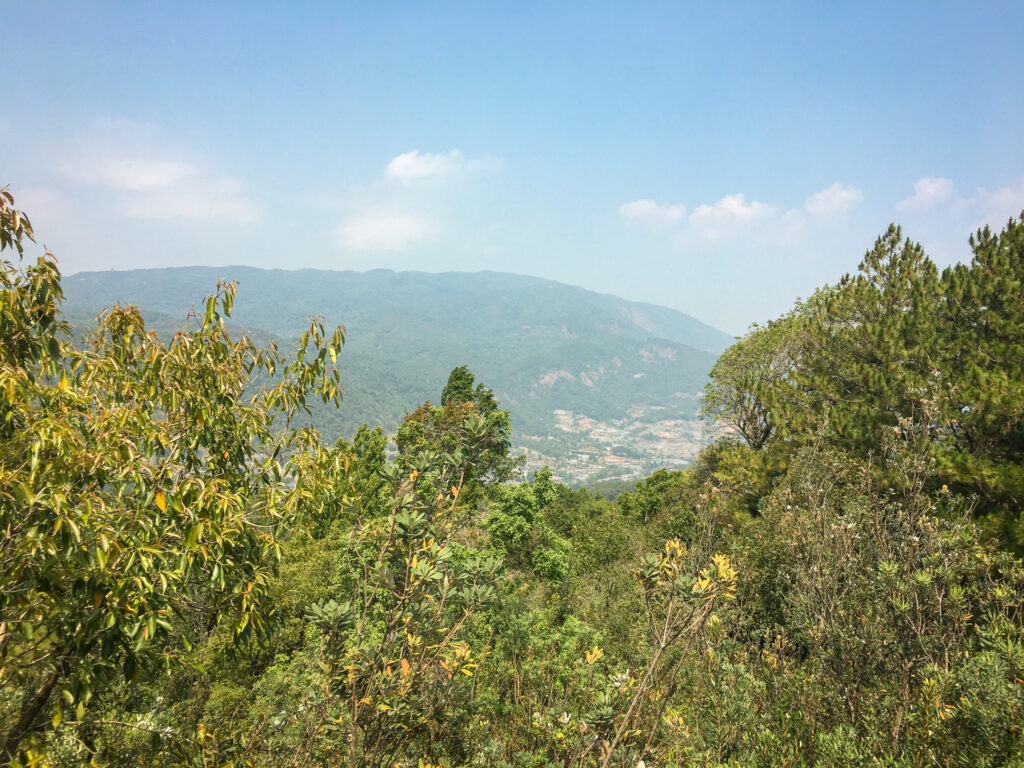 Another early morning to look forward to.  To see the pics and notes for Day 14 click HERE.

For you overachievers here are the Ebird checklists for that portion of our trip:

Glad you found GreatBirdPics.com.  Check out the site before you leave: see the Latest Pics uploaded by our members or read the About GPB to find out more about the site.  You are welcome to join if you enjoy bird photography.