Analyzing Rejected Photos To Improve The Number of Keepers

After three and a half hours of good birding at Elsen’s Hill we headed to the parking lot.  As we started packing up, chatting with some fellow birders, Greg pointed out a Blue-winged Warbler in a small tree right next to us.  Never one to pass up an opportunity to get some pictures of a beautiful warbler I happily snapped away for over seven minutes, confident I got lots of GreatBirdPics!

I loaded all the pictures on my computer, anxious to see these pics on my screen.  It took a long time to transfer the 207 images of the warbler, but finally I was ready to start picking out the best shots.  Reject. Reject. Reject. Keeper. Reject. Reject. Reject. Possible Keeper, Reject.  And so it went through all 207 pics; reject after reject with a few keepers mixed in.  To say that I was disappointed is an understatement – I just couldn’t understand why, after being right next to the bird for so long, I didn’t have more keepers.  So I decided to do an analysis of the set.

I did have some keepers, which I separated into three types.  Ten images (5% of the set) were GreatBirdPics worthy, including these below.  Both of them were in focus, well-lit, and had some action to attract your interest: 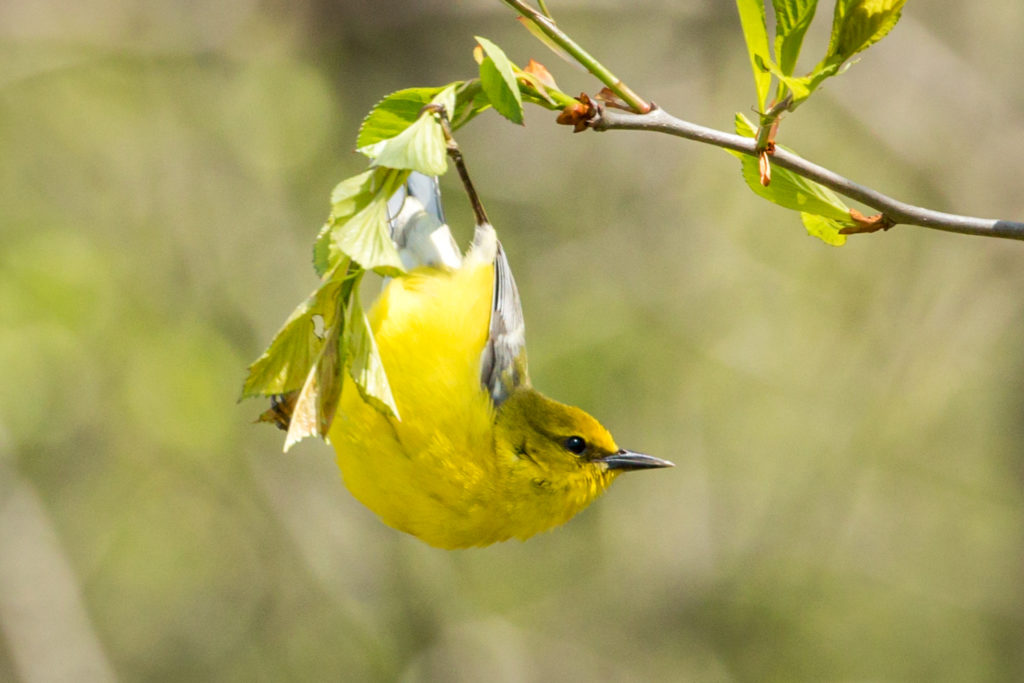 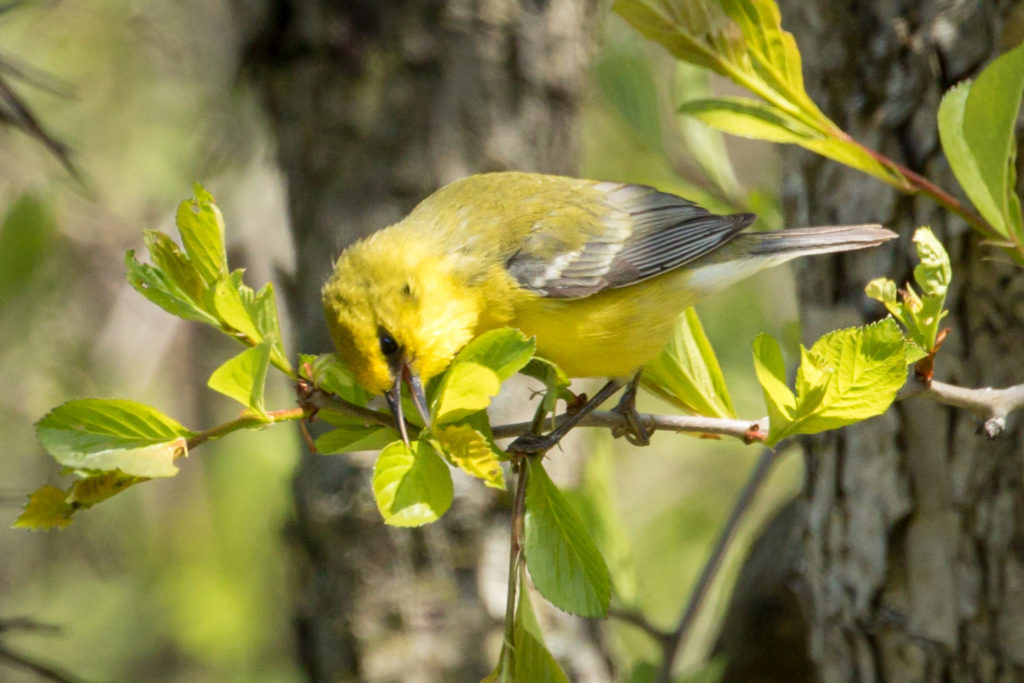 A second category of keeper were those that although good, just lacked that “je ne sais quoi pas.”  They were good but lacked something that made it great.  Just over 5% of my pictures fell into that category, like the one below.  Looking carefully at this picture the eye lacks that catchlight and some foliage blocks part of the body.  Good, but not great.  If I didn’t have any better ones I would have included it in GreatBirdPics.com. 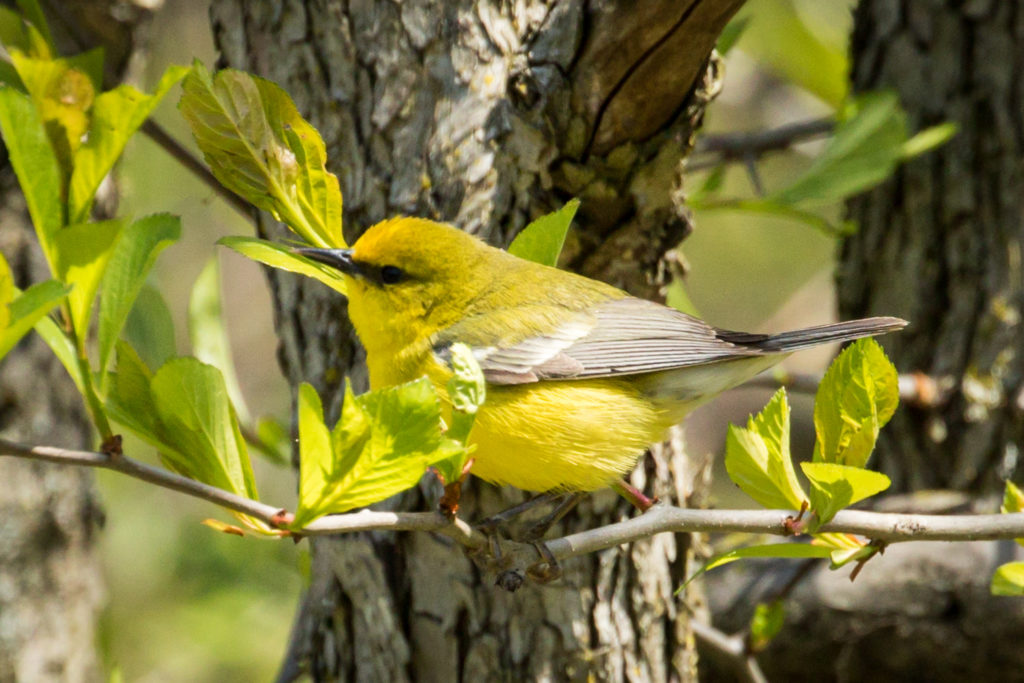 A third category of pictures could have been keepers but were eventually set aside.  My camera has the ability to take 10 shots per second – it sounds like a little machine gun clicking away.  As a result I’ll get a lot of similar pictures (you’d be surprised at how much can change in a tenth of a second), so I carefully review those that are almost identical and pick the best one and set the rest aside.  About 9% of my pictures fell in this category – they could have been keepers but a similar shot was just a tiny bit better.  Compare the picture below with the very first one above – similar but not quite as good. 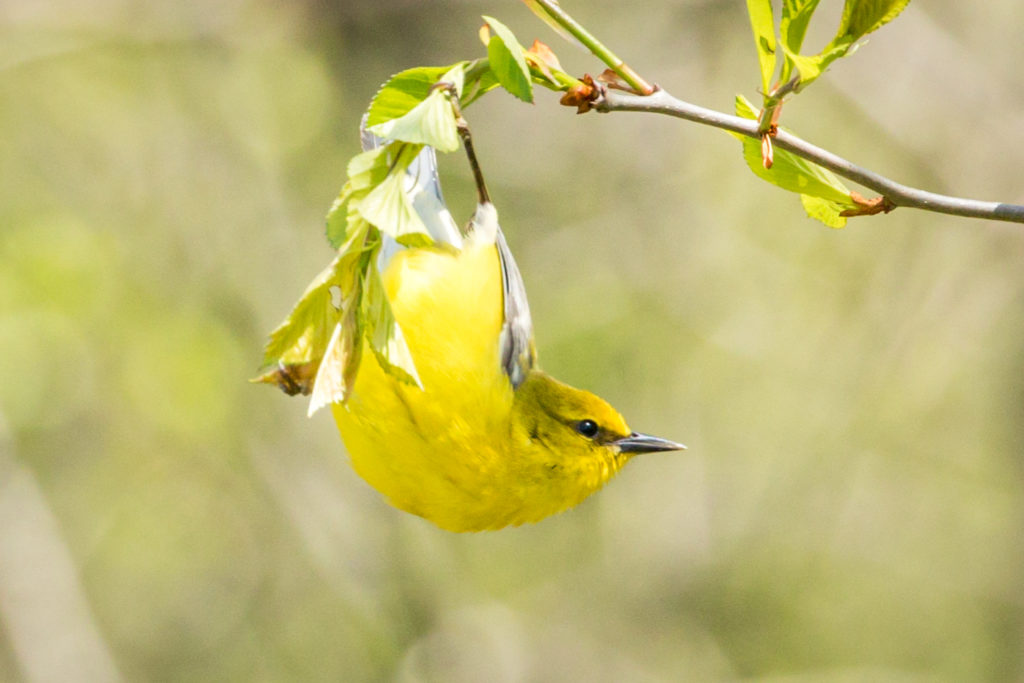 In summary out of the 207 pics I ended up with 21 great and good pics and 18 that were similar to a keeper and set aside.  These keepers were about 19% of the total.  Which means that 81% of the pics were rejects.  Why so many rejects given the extended opportunity and close-at-hand conditions?

I ended up with 168 rejects so I did an analysis of just the rejects to determine why more weren’t keepers.  Here’s a quick and dirty list of why I rejected them (the percentages are relative to the set of 168 rejected, not the entire set of pics):

Let’s look at some examples of each of these types of rejects.

As mentioned at the beginning we had been there for three and a half hours so by the time we hit the parking lot it was just after noon.  The sun was at its highest point in the sky, casting down shadows across the bird from above .   The lighting from above created shadows on the head obscuring the eyes and across other parts of the body.  The angle of the sun also reduces the opportunity to capture a catchlight off the eye which is a real attention-grabber in bird pics.  In all, over 25% of the rejects were due to poor lighting on the bird, like the one below: 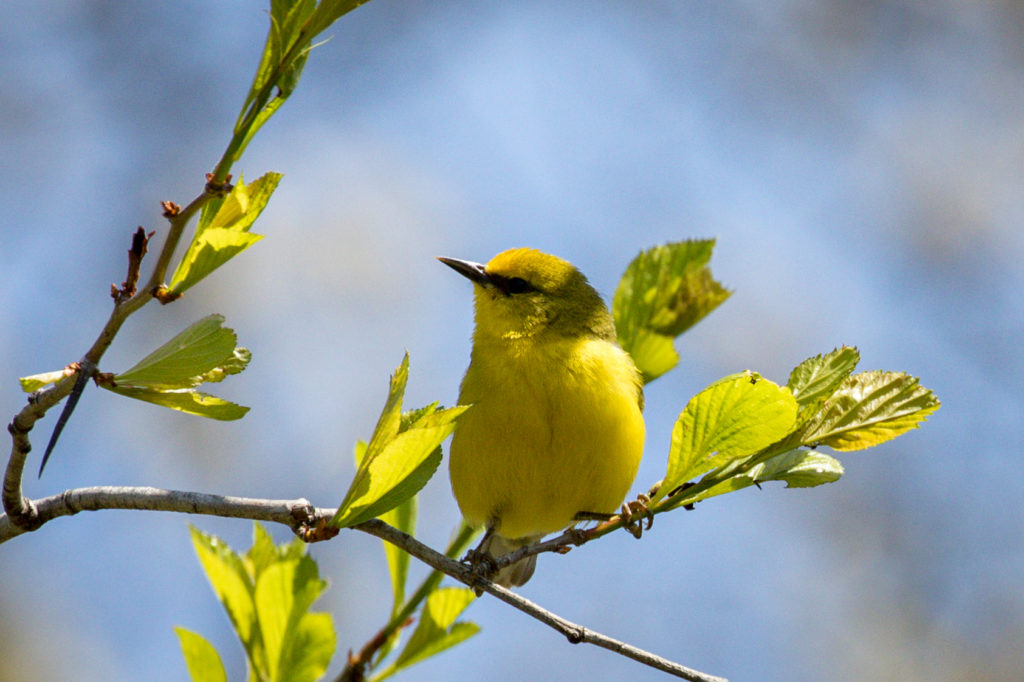 This bird was in a feeding frenzy, hopping around from branch to branch looking for bugs.  I tried to take some shots when it reached its bill into a clump of leaves but it turns out you couldn’t see the head that well.  In other shots the bird jumped behind leaves or twigs.  In all, almost 26% of the rejects were due to foliage obstructing the bird like the one below: 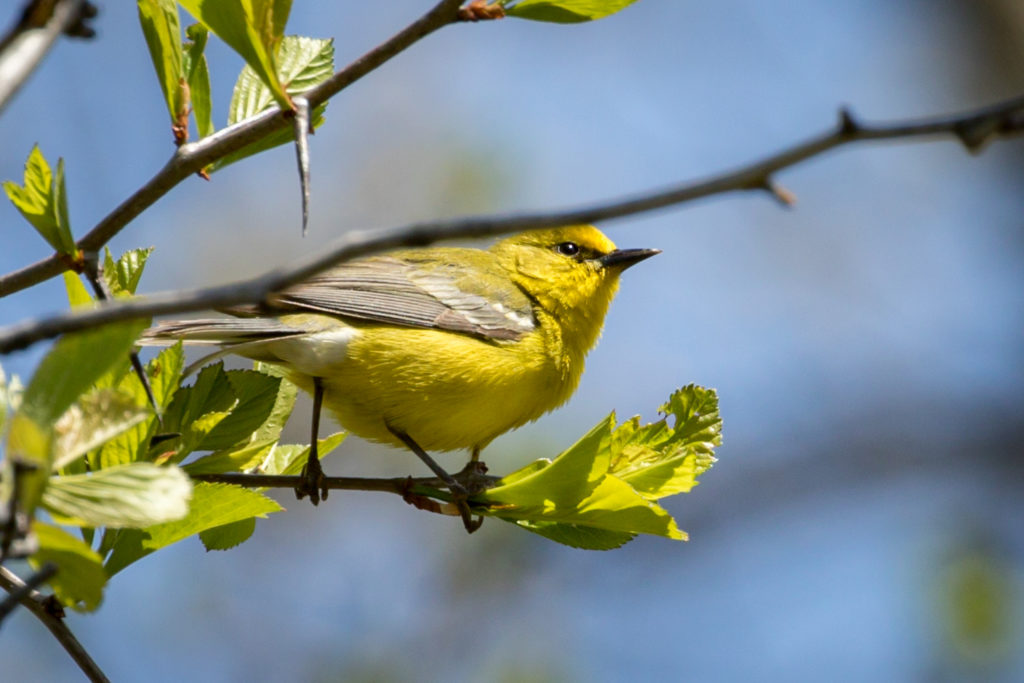 Sometimes you just can’t avoid those butt-shots (Birder2011 can attest to that).  The bird is jumping around in the tree so much that sometimes the angle it presents doesn’t show much.  About 20% of the rejects were due to the bird’s poor pose like the one below: 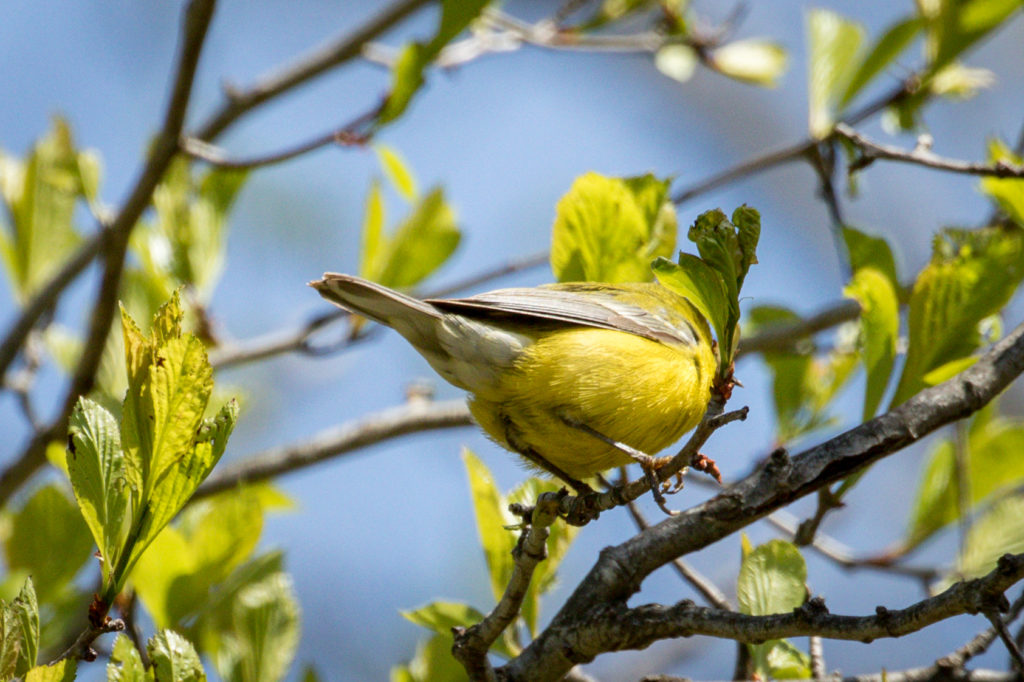 As good as cameras are these days sometimes they don’t grab on to the right object to focus on.  Many times (about 14% in this set) the camera focused on a leave or twig which was behind or in front of the bird, leaving the bird out of focus.  I’ve tried manual focus at times but it’s hard to see through the small viewfinder if I have a good focus or not so in most cases I find that the auto-focus does a better job.  Sometimes it just misses, like the one below (note the leaf right behind the head is in good focus): 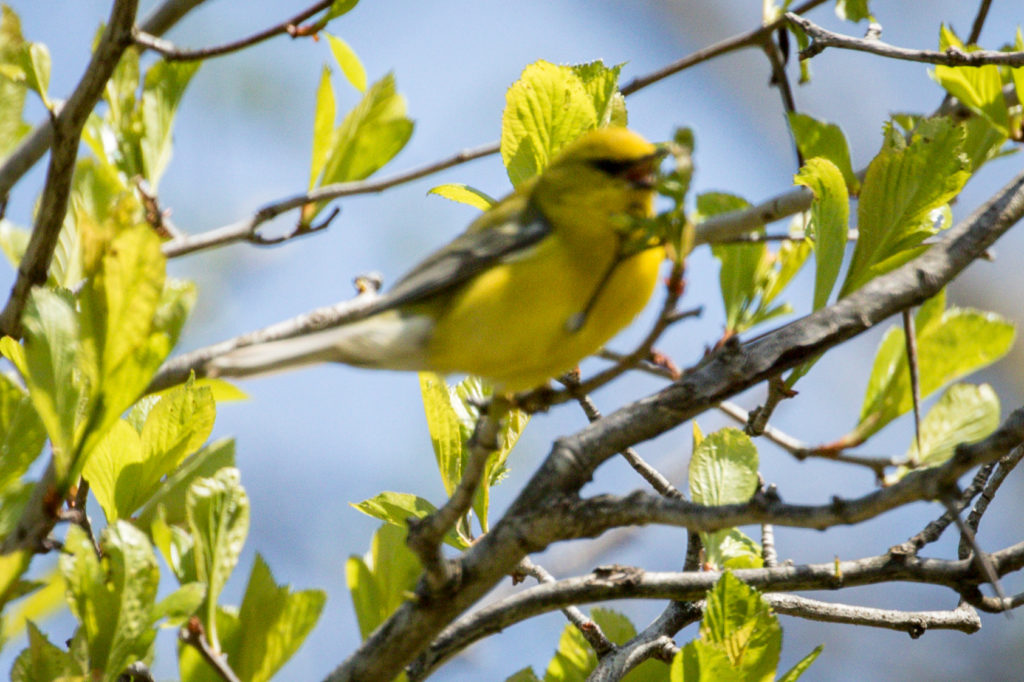 Before I began my analysis I hypothesized that there would be many rejects because I didn’t hold the camera still.  I didn’t find this to be true.  Because the bird was close, the amount of camera shake was reduced; when the bird is far off it is much harder to keep the whole 8 lb. camera and long lens still.  In this case about 4% of the shots were rejected due to camera shake, like the one below, where nothing is in focus: 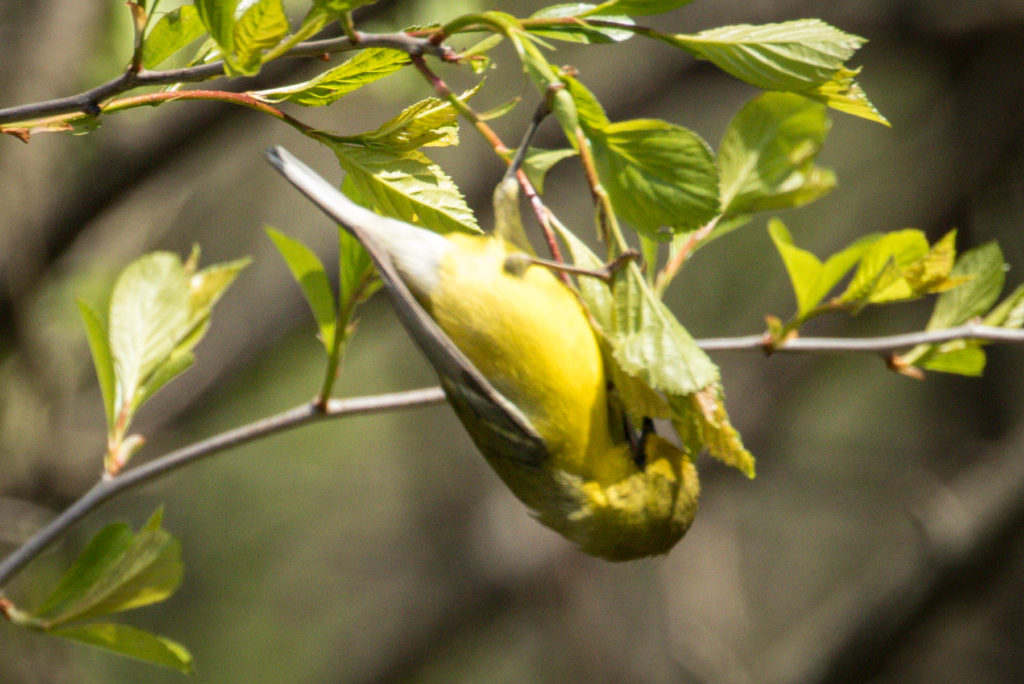 The bird was very active as it bounced around in the tree.  Even though I had set a fairly high shutter speed of 1/500th of a second, if the bird made a big movement during that 500th of a second it was blurry.  Almost 10% of my shots were rejected because of the bird’s movements during the shot.  Here are a couple of examples.  In the second one I was focused on the bird right in the center of the frame – can you find the bird now? 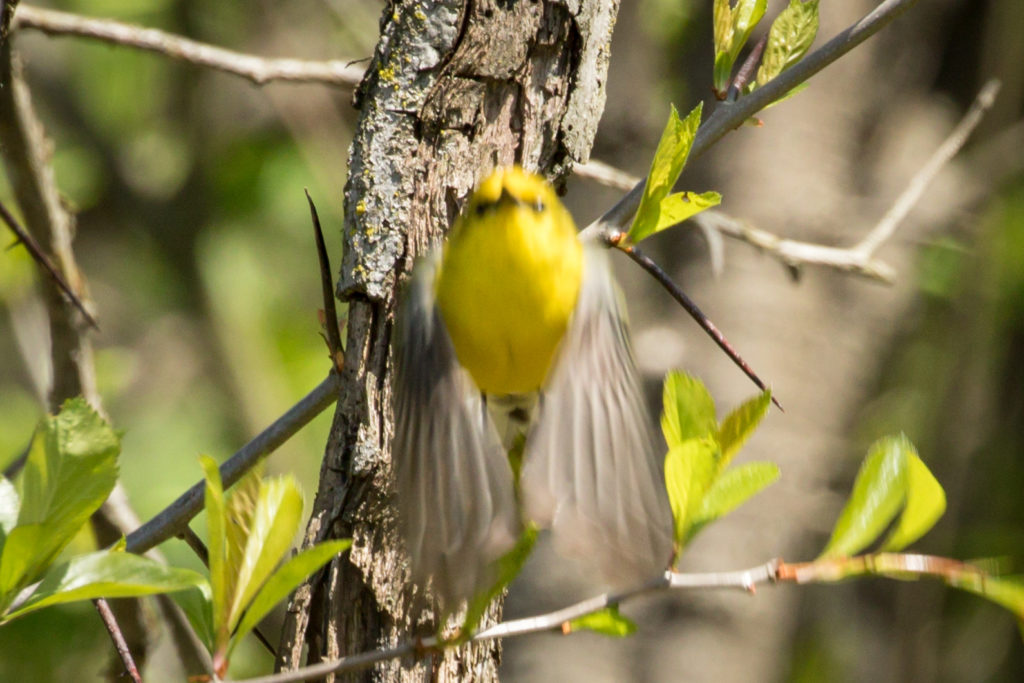 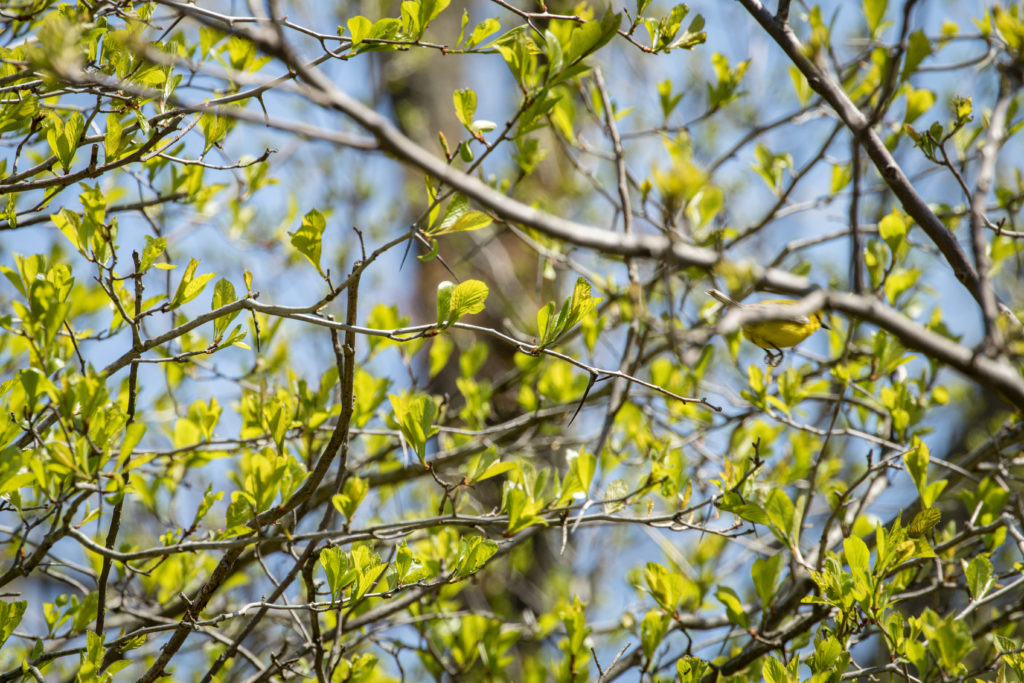 I came away with several conclusions as a result of my analysis, which are detailed below:

Some Things Are Out of My Control – Live With it!

There’s nothing I can do about a Poor Pose or the Bird Moved During the Shot.  When a bird is active and bouncing around quite a bit this is going to happen and you take them with the good shots.  So in these situations I just have to accept that 30% of my rejects are part of the price of taking shots of active birds.

There are some Factors I can Partially Control: Lighting and Foliage

Lighting – It’s hard to tell yourself, “I’m not going to take any pictures of this bird right next to me because it’s noon and the lighting will be bad.”  If the bird is right there, spitting distance away, I’ve got to take pictures of it.  However, knowing what I know now, I can begin shooting with the understanding that a lot of the shots won’t be GreatBirdPics because the sun’s angle will cast shadows over the body.  I can try and position myself as best I can so when the bird is in a particular position the shadows are less likely to obscure parts of the shot.  I can take the shot when the bird’s head is angled up so it isn’t in a shadow.  When the lighting is directly overhead nothing will eliminate the 27% rejection rate but I may be able to reduce it.  One work-around is to got out earlier to get shots, when the light is best.  Perhaps that same bird was in that same tree by the parking lot at 6:30 AM and I could have taken more keepers (it could have happened).

Foliage – When the bird is bouncing around inside the foliage like a ping-pong ball you can’t avoid taking some shots that have leaves and twigs obscuring part of the body.  After you take some of those shot and if it appears the bird is going to be staying around you can be pickier about which shots you take, lowering your foliage-obscured rejects below 26%.   I also chose some of my shots poorly, thinking it would be a great shot to see the bird’s head buried into the leaves; well they weren’t that good because you couldn’t see the head.

There are some Factors I Can Work On Improving: Out of Focus and Camera Shake

Out of Focus – A bird can be out of focus because the camera didn’t focus on the right object (the bird) or because I didn’t manually focus properly.  Because I use back-button focusing I have to constantly hit that button every time the bird moves. And I need to check to see if the camera has reestablished a good focus on the BIRD after it moves.  As previously mentioned it’s sometimes hard to see if the bird is in focus through the viewfinder.  Perhaps a bit of practice there can improve this after I focus manually.  If I’m careful and observant I can probably reduce the number of rejects due to poor focus below 14%.

Camera Shake – Oftentimes, particularly when there is a beautiful bird close at hand I get so excited that I forget to note what my camera is doing.  I swing the camera around from here to there trying to follow the bird as it hops from branch to branch, often taking the shot before I steady the camera.  Although my tendency is to click the shutter button as soon as I see the bird in the viewfinder, I have to teach myself to steady the camera before taking the shot or it will most likely be a reject.  I also need to learn how to and then practice holding my camera still.

After studying my rejects I feel like I have a better understanding of why I had so many of them given the seemingly ideal conditions for the pictures.  I have to accept that even in the best of conditions I’m going to have rejects due to poor poses or foliage.  I can work on my timing (early morning instead of noon) and shot selection (not when the bird’s head is covered by leaves).  I can practice holding my camera steady and check that the focus is on the bird, and not a nearby twig.  One result of this is that I’ll be taking fewer pictures and hoping that all the ones I do take are keepers.  What do you do to reduce your rejects?  I’d be interested in hearing from you.

Thanks for such an interesting article!

Mike, I agree with all of your comments about keepers. But lets face it, getting a great picture of a warbler is not easy. Their quick movement, tiny size and uncooperative nature make these birds a real challenge. Also, getting a clean background sometimes isn’t possible. I usually try to find shootable birds on the lowest possible branches in the proper light and pray that a bird will perch on a specific area I’m zoned in on. Often it’s more bird watching than bird shooting. But when that bird does hit your target area shoot away making sure your settings… Read more »