Word of the Day: Auriculars

Yesterday Karen, Birding Buddy Mark, and I went out to Saganashkee Slough in south Cook County in search of a Little Gull recently reported there (no, we didn’t spot it among the 600+ other gulls flying around).  The word slough (pronounced “slew”) is defined as a large swampy area so Saganashkee Slough must have been dammed off and it became a large shallow lake.  Due to its large size it does attract a lot of waterfowl (and gulls) this time of year.

There were about 8 of us scanning the lake and skies looking for the Little Gull without success, but we did spot lots of other birds including Red-necked Grebes, Ruddy Ducks, Pied-billed Grebes, Bonaparte’s Gulls, Coots, and Wood Ducks to name a few. As we scanned I spotted a grebe far off in the distance and as we all tried to ID it we decided it had to be an Eared Grebe or a Horned Grebe.  One of the other birders there, Mike MacInerney (a Bird Brain), told us to see if it had “dark auriculars”.  Huh?  I’m not afraid to show my ignorance so I asked what “auriculars” are.  He explained that the auriculars are the cheeks of a bird and that the Eared Grebe would have a dark area there.  We went back to our scopes and in the brief seconds the grebe was on the surface (it spent most of its time diving underwater) we were able to see the dark auriculars, confirming that we were viewing an Eared Grebe.  These auriculars appear on adult nonbreeding Eared Grebes during October-March.

This particular Eared Grebe was so far away it was impossible to get a picture of it, but I do have one from our trip to Arizona a few years ago that show the dark auriculars: 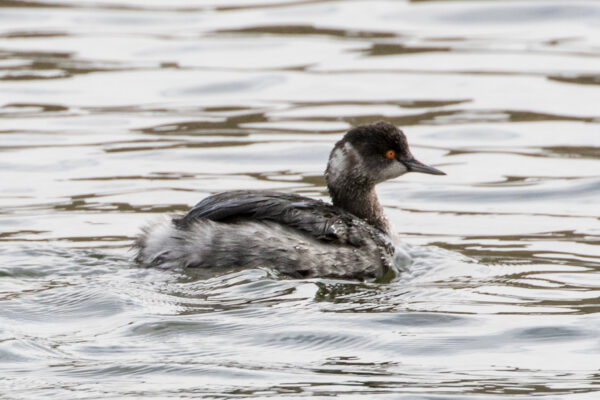 You can clearly see the dark feathers on the head descending down into the auricular.  Compare this to a nonbreeding Horned Grebe  below in which the dark head feathers end a eye level: 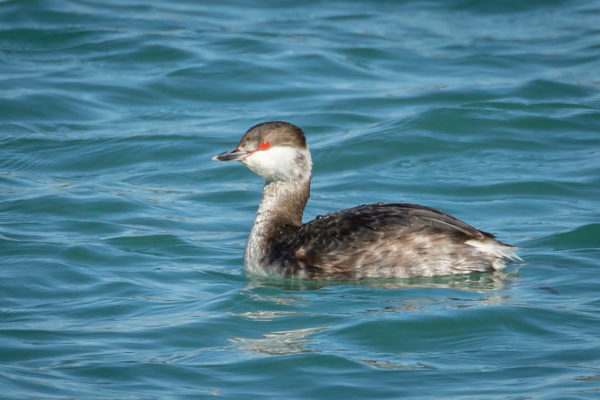 So there you have it, your word of the day.  Get out there this weekend and do some birding – maybe your auriculars will turn red in the cold.  Happy Birding!