We belong to the GroupMe Rare Illinois Bird group.  GroupMe is an App that allows any member of a group to send real-time messages to the rest of the participants (whereas eBird Alerts only come at regularly scheduled times).  Since being admitted to this group (the moderator approved our membership after we promised to follow the rules) we regularly receive messages about rare bird sightings from all over the state.  Last week we received an alert for a Great Kiskadee in the same area we saw the Eurasian Wigeon.  I almost dismissed the alert as a joke; the Great Kiskadee is a tropical bird whose range (according to Sibley) only extends as far north as Oklahoma, and even sighting it there is considered rare.  What’s it doing in frigid Illinois?  In the same vicinity as the rare Eurasian Wigeon?  Does that pond contain a rift in the space-time continuum?

So Saturday Karen and I were about to leave the house and return to the Morton Arboretum for the 11th time to find the Crossbills (again) when we received a GroupMe Alert that the Great Kiskadee was seen again (after being MIA for the previous three days).  We were backing the car out of the driveway in less than 5 minutes and headed south in search of a bird that shouldn’t be there.  As I was driving down the highway I saw at least two cars with birding bumper stickers zoom by us going over 80!

For those of you who are not hard-core birders, you have to understand the significance of something like a Great Kiskadee appearing in Illinois.  As far as anyone knows it has never ever been reported in the Illinois.  Therefore every birder in the state would want to see it so they could include it on their state life list.  Even those who have previously seen it in Texas or Central America (like us) would still want to see this bird in Illinois.  And this would be a Lifer for anyone who hasn’t traveled south and seen them.  I’d bet some birders from Wisconsin and Indiana would come to see that bird: it is a celebrity and every birder around wants to see it.

After our 30 minute drive we pulled up and saw about 10 birders there – and the bird!  As I was pulling off on the shoulder the Great Kiskadee was down on the bank across the pond drinking.  By the time we got out of the car and grabbed our gear it had moved up into the trees.  No, I didn’t get a picture of it but Birder2011 got there just in time to get this shot of it – it was pretty far away so she did a great job of capturing this shot through the branches: 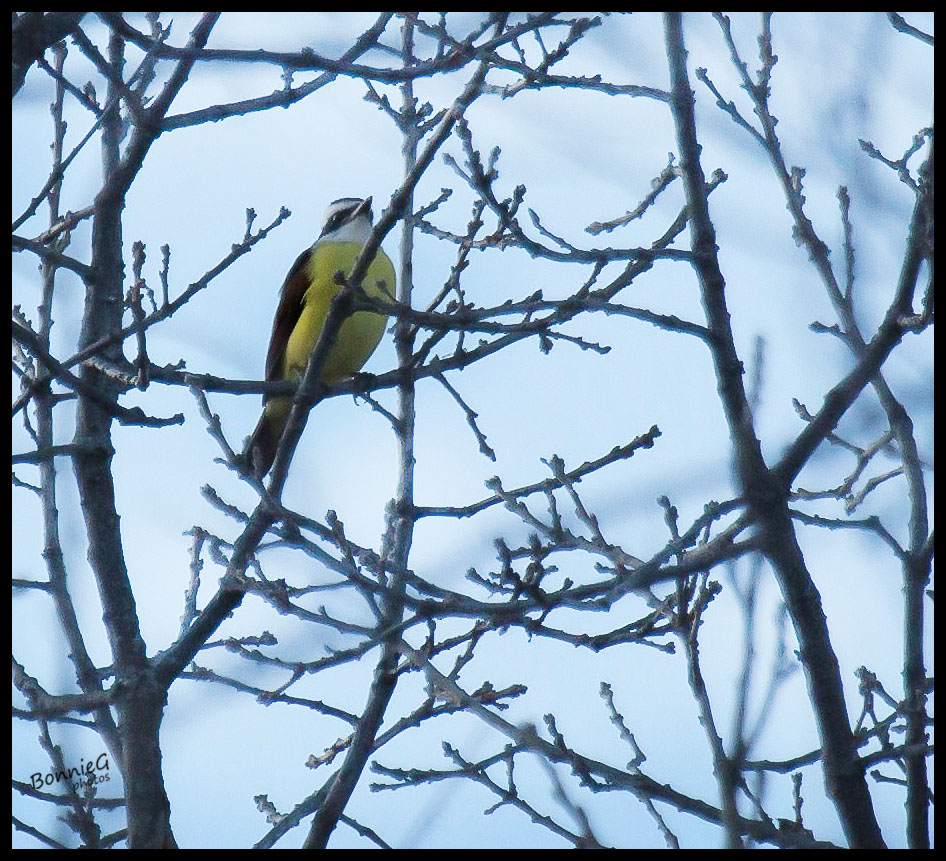 Just so you get an idea of how beautiful the Great Kiskadee is, below is a pic I took while in Costa Rica (I didn’t get any of the one in Illinois): 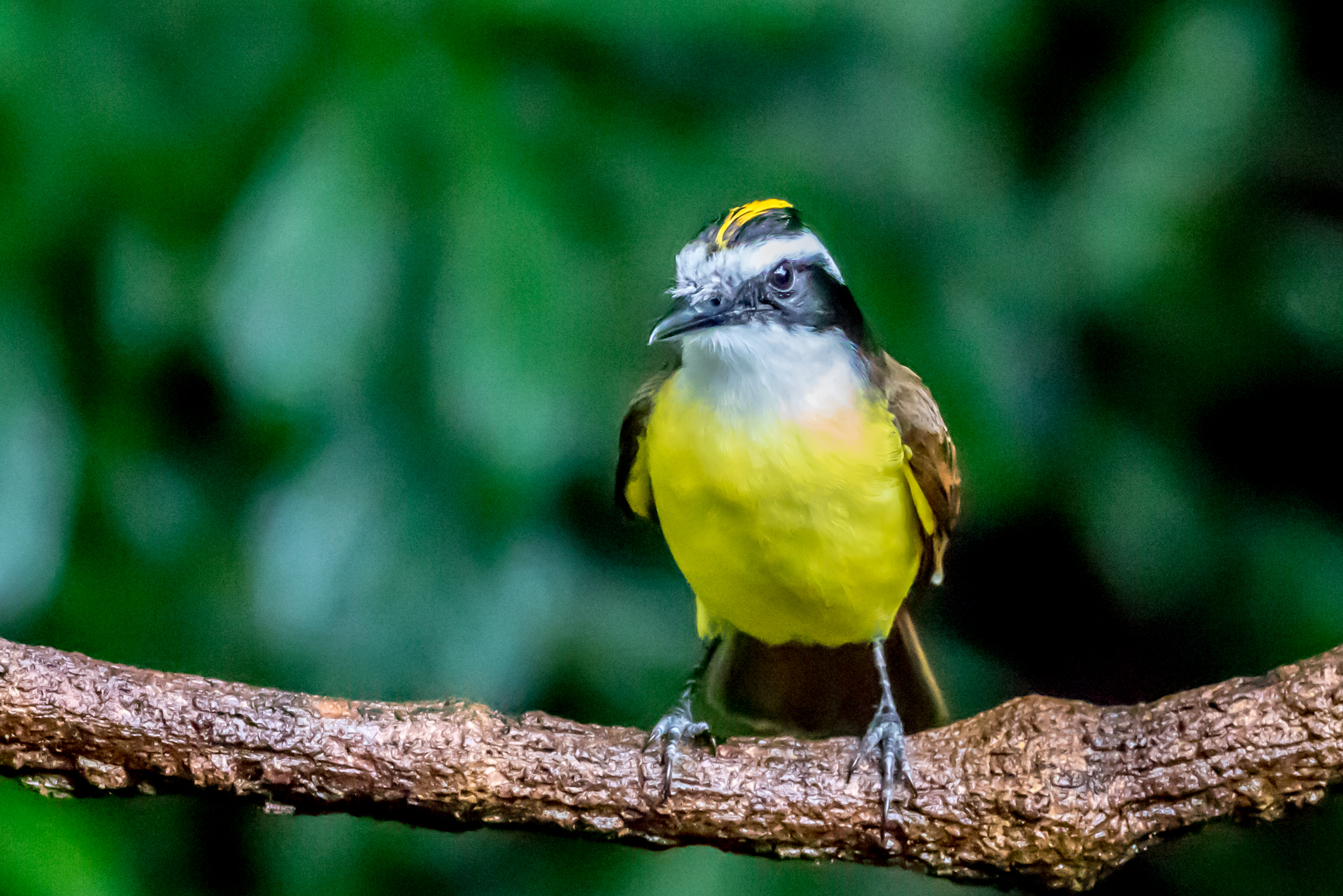 That bright lemon-yellow body is unmistakable so it was pretty easy to spot it even from far away.  It continued to move away from us, not that that stopped anyone from following it down the road (its gotta be out there somewhere): 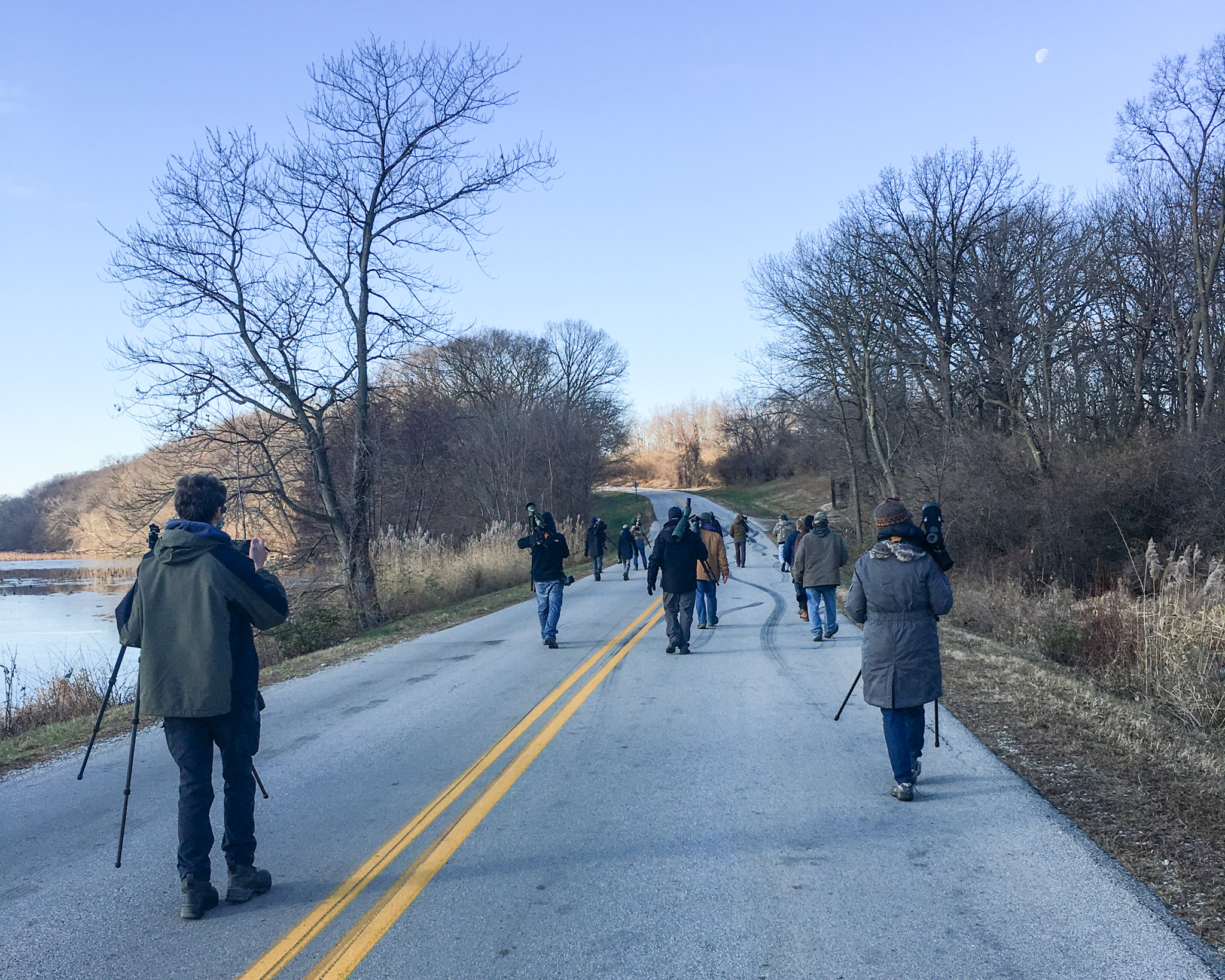 By now the number of birders had grown to about 20 with more arriving every minute.  The bird disappeared for awhile, splitting the group into those who were following it down the road and those who remained in the spot where we first observed the Great Kiskadee.  Karen and I were among those who walked about 1/2 mile down the road in search.  We camped out on a boat ramp hoping the bird would continue down the shoreline toward us.  It didn’t – we received word that it was back near our original spot foraging along the bank of the river.  So we returned to where we started to view the bird from afar – now with about 50 other birders (everyone was wearing a mask)! 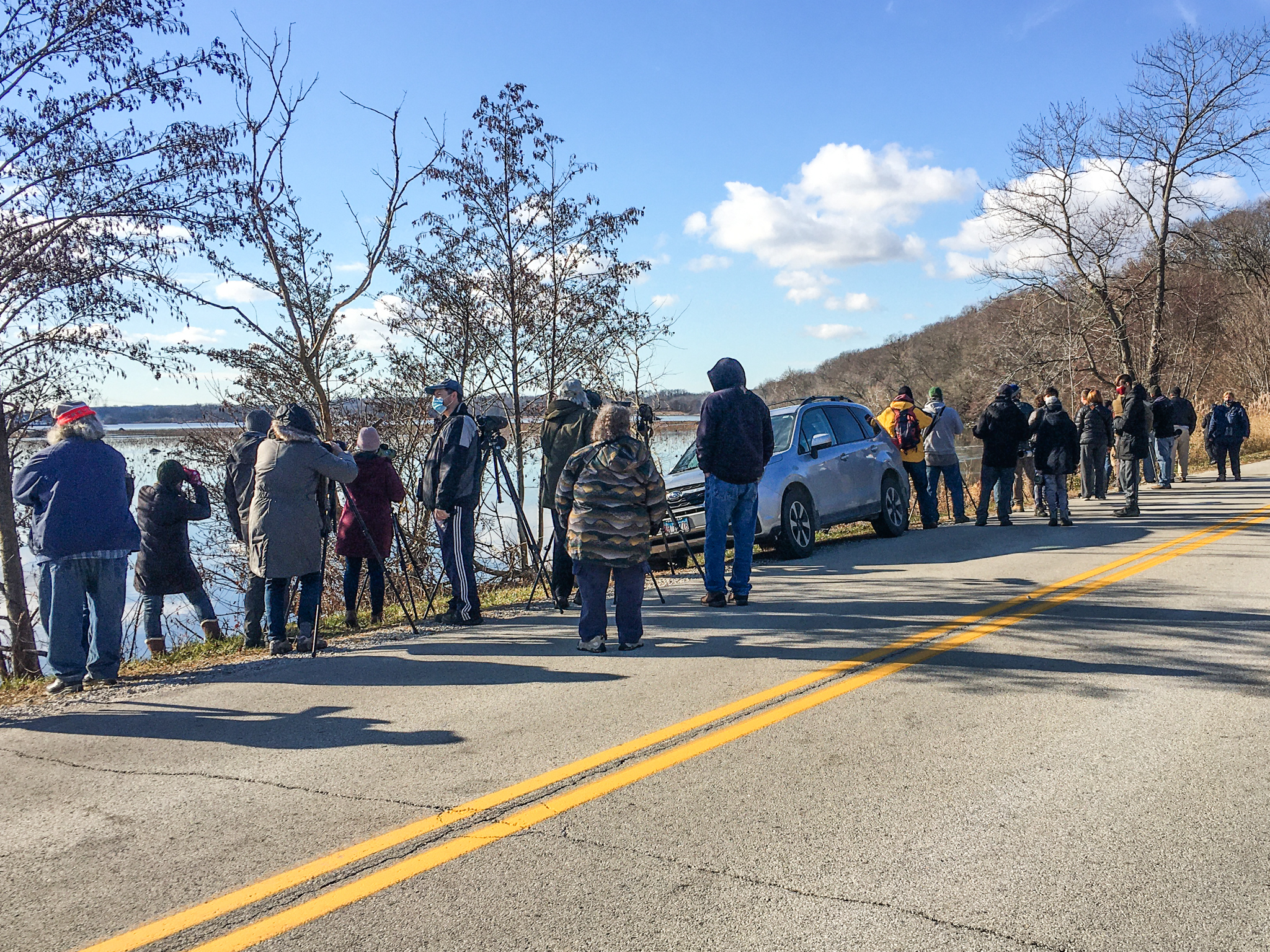 It was like the line of gawkers at the Oscars – everyone wanted to get a look at and picture of this rare, beautiful bird.  People enjoyed just being there and sharing the moment with each other.  Many lingered there after seeing the bird to reconnect with old birding buddies from around the state, sharing with each other how many state Lifer birds the Great Kiskadee gave them, and reliving past rare bird sightings.  We saw at least seven of our birding buddies there.  One person took on the roll of traffic cop, directing the newcomers where to park their car; a woman kept going up and down counting how many people were there; many offered looks of the bird through their scopes.  It was like a pop-up Bird Festival – a glorious way to spend a Saturday morning.

So we became bird-chasers!  Heard about a rare bird, jumped in the car, and tried to find it.  Actually it was quite fun.  Hear about a rare bird in your area – let us know, maybe we’ll head your way.

PS – If you found this page doing a web search we’d love to have you as a part of GreatBirdPics.com.  Click HERE to find about this little website filled with great bird pictures.