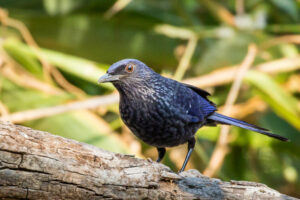 This is Day 16 of a 19-day birding tour of Thailand; it was a private group arranged through Field Guides, adhering to their typical itinerary.  The pictures in this post are just some of the many Thailand pictures I’ve uploaded to GreatBirdPic.com.   Check out the site before you leave: see the Latest Pics uploaded by our members or read the About GPB to find out more about the site.  You are welcome to join if you enjoy bird photography.  Click on any bird picture below to see more information.  Click on any bird picture to see more information about the shot.

Doi Pha Hom Pok National Park covers a wide area which consist of two ridges down the top of steep hills with a large valley between them.  Today we birded atop the west ridge, also known as Doi San Ju.  While there we stopped in two blinds and we were treated to looks a lots of new birds.

It still took a while to get to our destination and we made a stop or two on the way in.  Our views from the top of the ridge overlooking the valley were spectactular and were good places for birds to perch.  Even though they might have been high in the trees, because the trees started down the valley we sometimes ended up at eye-level with the birds.  This look at the Golden-fronted Barbet was much better than the previous sighting we had deep in the jungle: 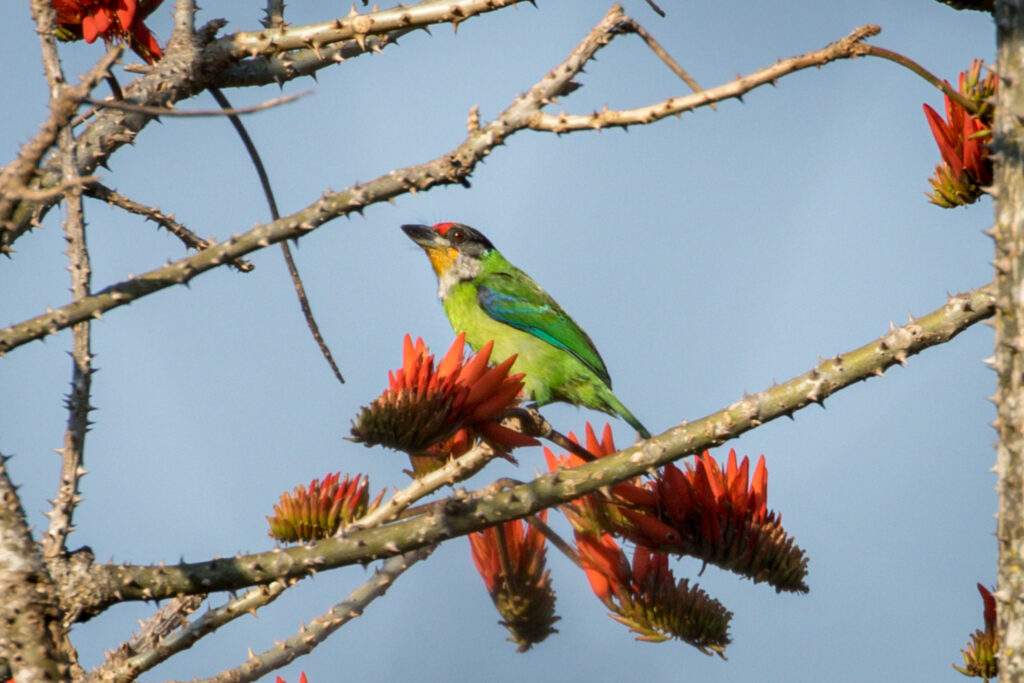 I never got tired of seeing the Ashy Drongo with its long-flowing two-piece tail: 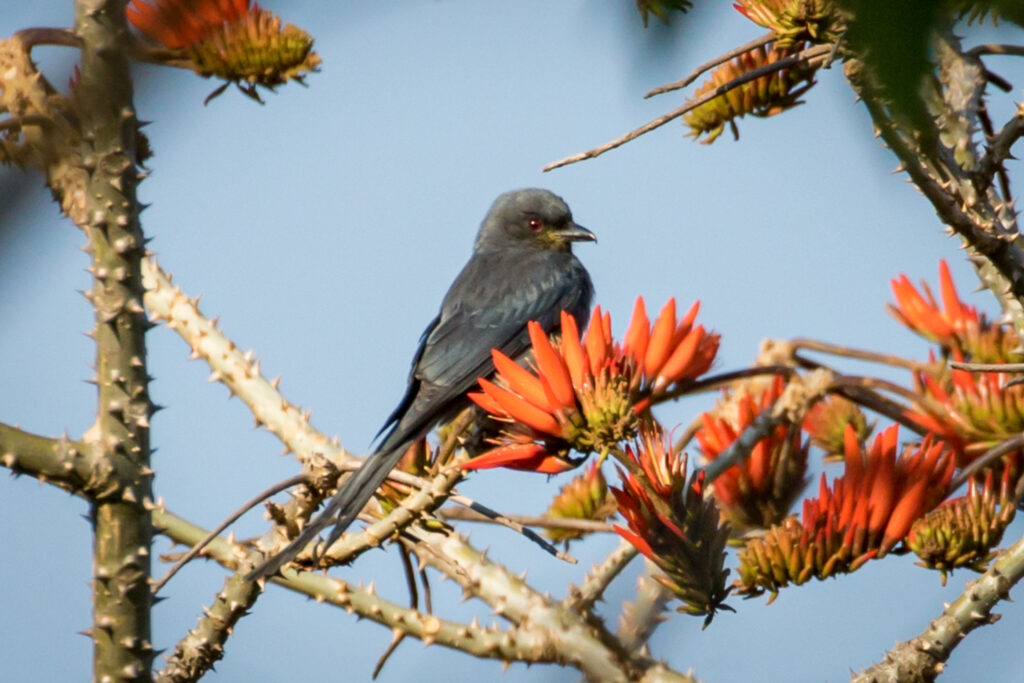 We drove down the road enjoying the scenery and stopped near our first blind that day.  Before we even got there we had a great look at a Spectacled Barwing, which seemed aptly named: 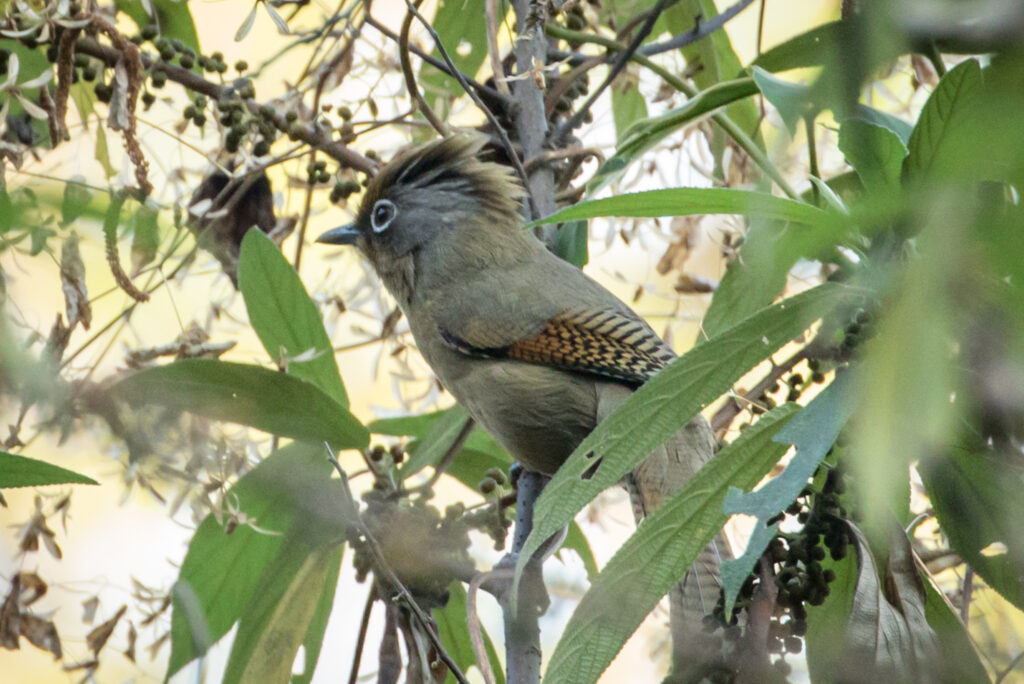 A Pale Blue Flycatcher was nearby, too:

As we walked down the road we saw this sign: 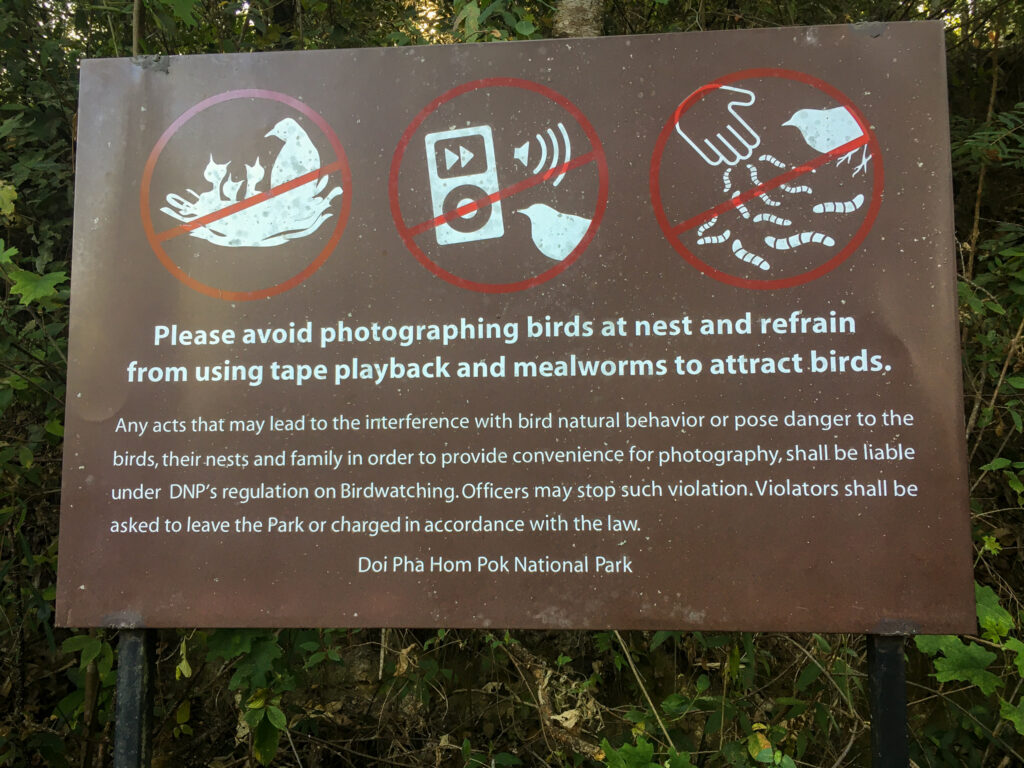 Although we never got near any nests, we regularly “ignored” the rules about playing bird songs and feeding them mealworms.  I’m sure we weren’t the only birding group to ignore these rules – in fact I would bet every bird tour uses recorded songs to encourage birds to visit and uses mealworms in every blind they visited.  I believe their rationale would be something along the lines of, “These tourists come all the way to Thailand to see birds and we’re going to find as many birds as we can for them.”  Is that logic good for the local economy?  Yes.  Is it in the best interests of the birds?  Probably not.  Nobody in our group complained about using recordings or mealworms – had we made a fuss, I’ll bet we would not have seen as many birds as we did.

With that said, our first visit to a blind this day was very successful from a bird watching point of view.  We settled down on our little camp stools as Chaing sprinkled the mealworms on the logs in front of us.  Our first bird visited soon – a White-gorgeted Flycatcher.  I had to look up what “gorget” means – a patch of color on the throat.  Aptly named: 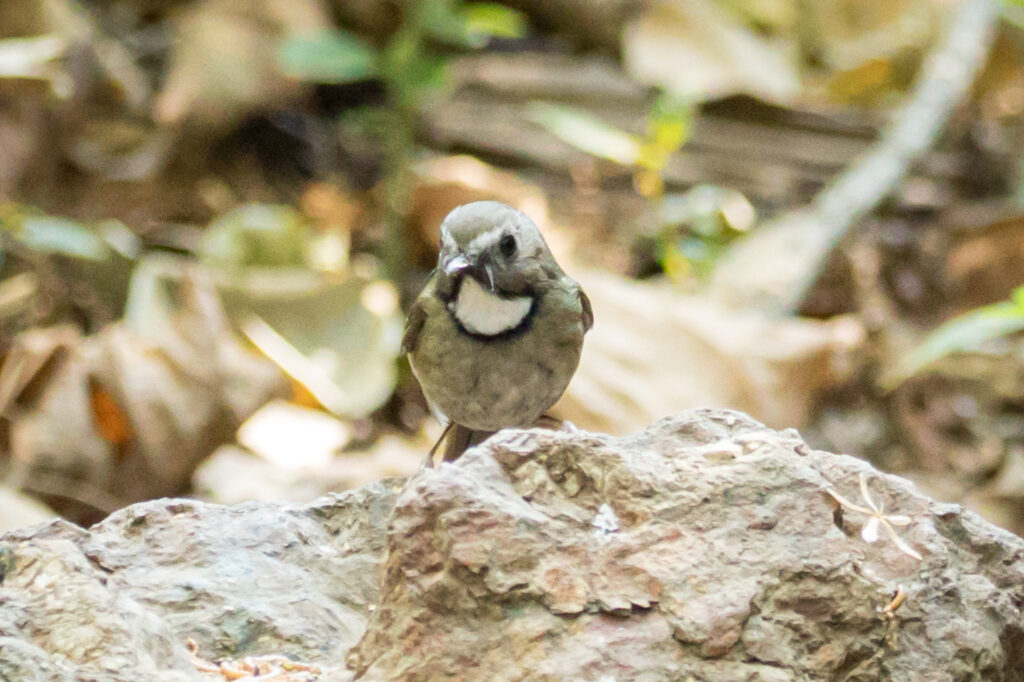 Our next visitor was a Blue-whistling Thrush.  I love the speckled breast and ring around the collar.  This one seemed to know we were behind the black nylon mesh as it peered our way, then it turned around and spread its tail for us: 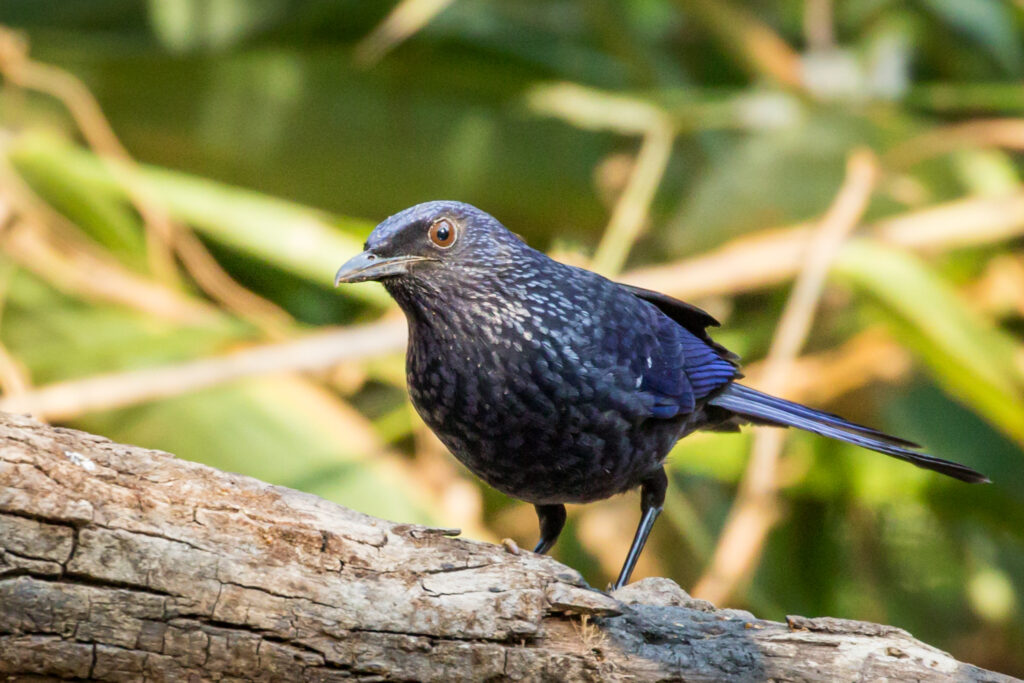 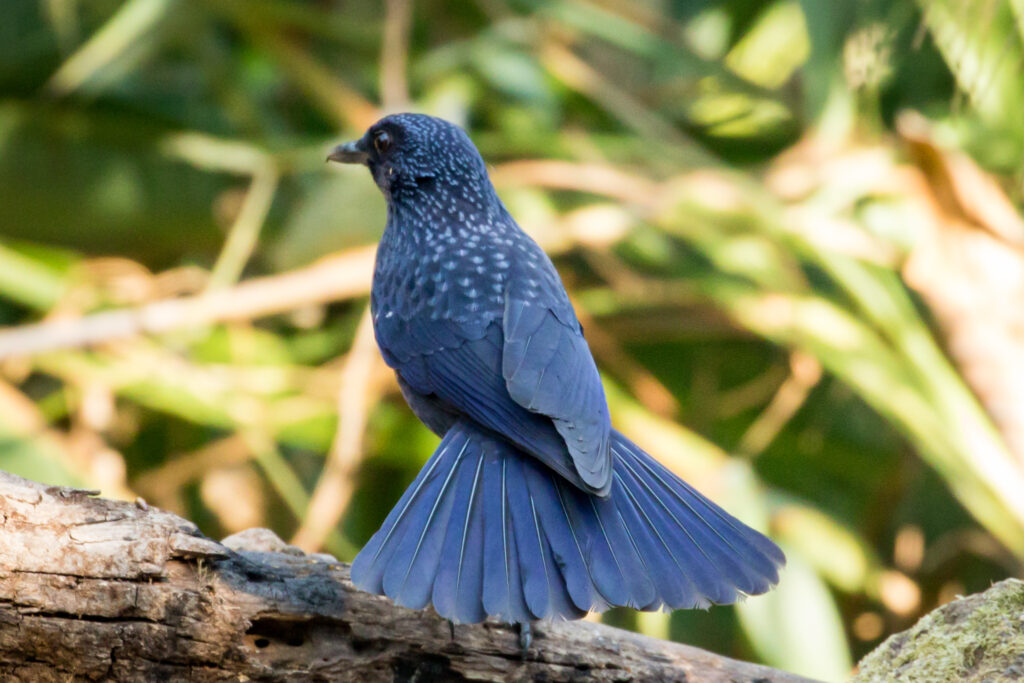 Our next visitor was the Rufous-gorgeted Flycatcher.  As previously noted, the “gorget” is a patch of color on the throat and you can see it clearly on the following shots.  The first two are of a male and the third one is a female (note the lack of blue on the head and shoulders): 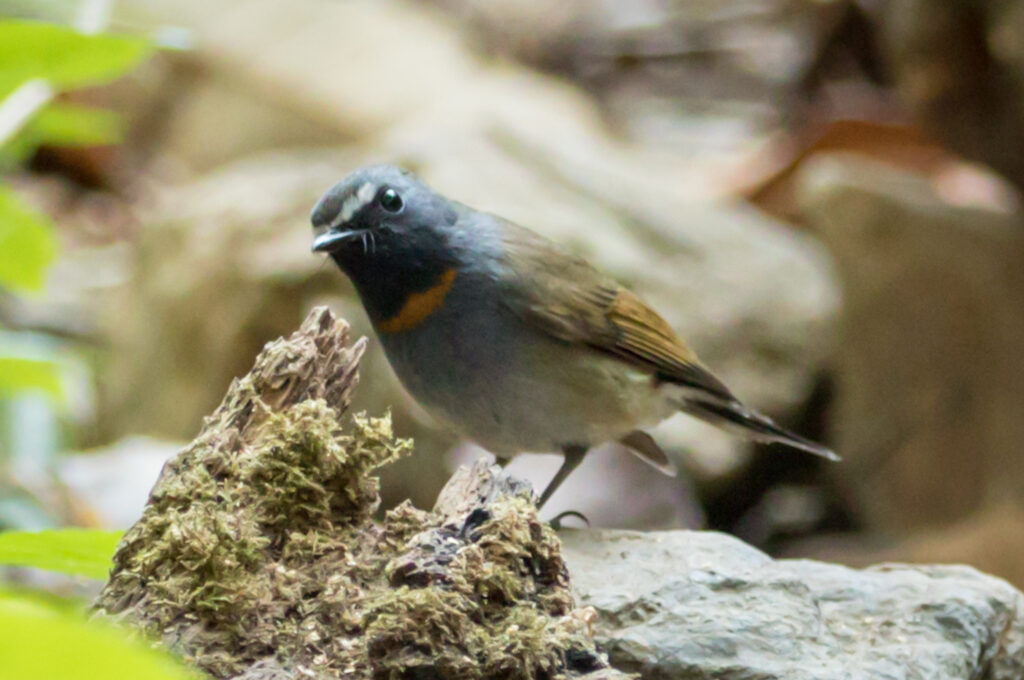 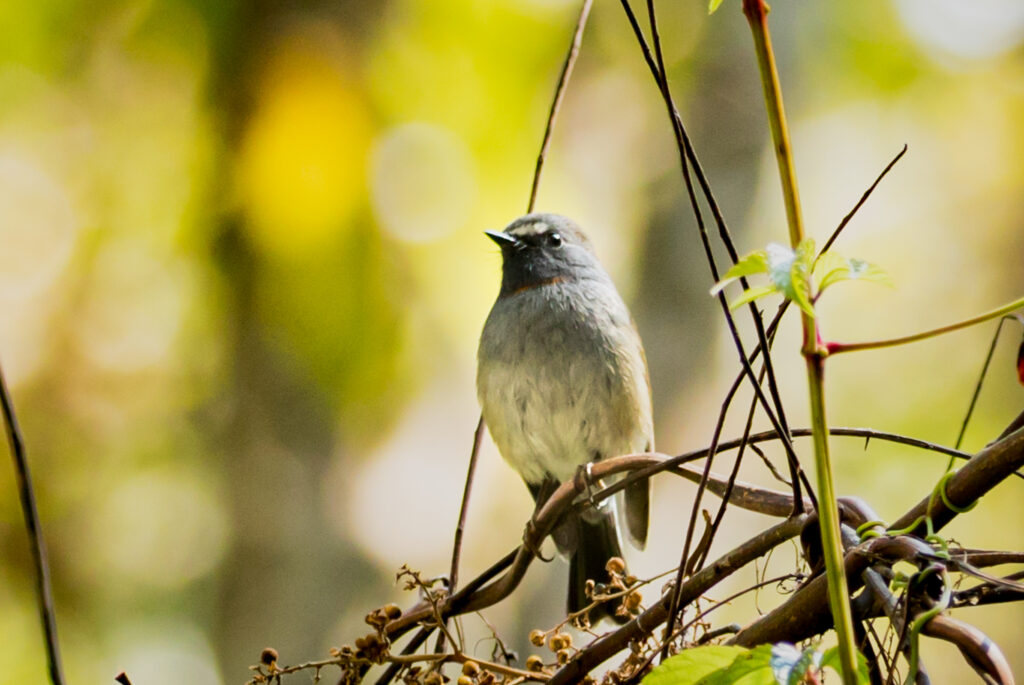 Next to belly up to the bar was a Hill Prinia.  We had seen Plain Prinia before and they were very pretty, but the long tail of the Hill Prinia really made it stand out: 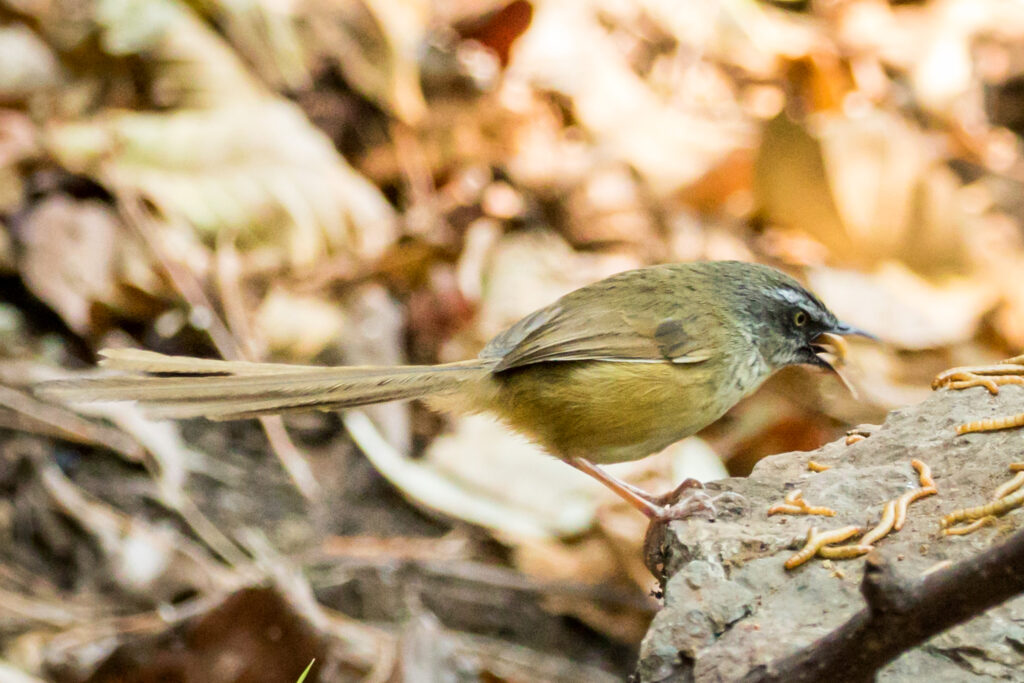 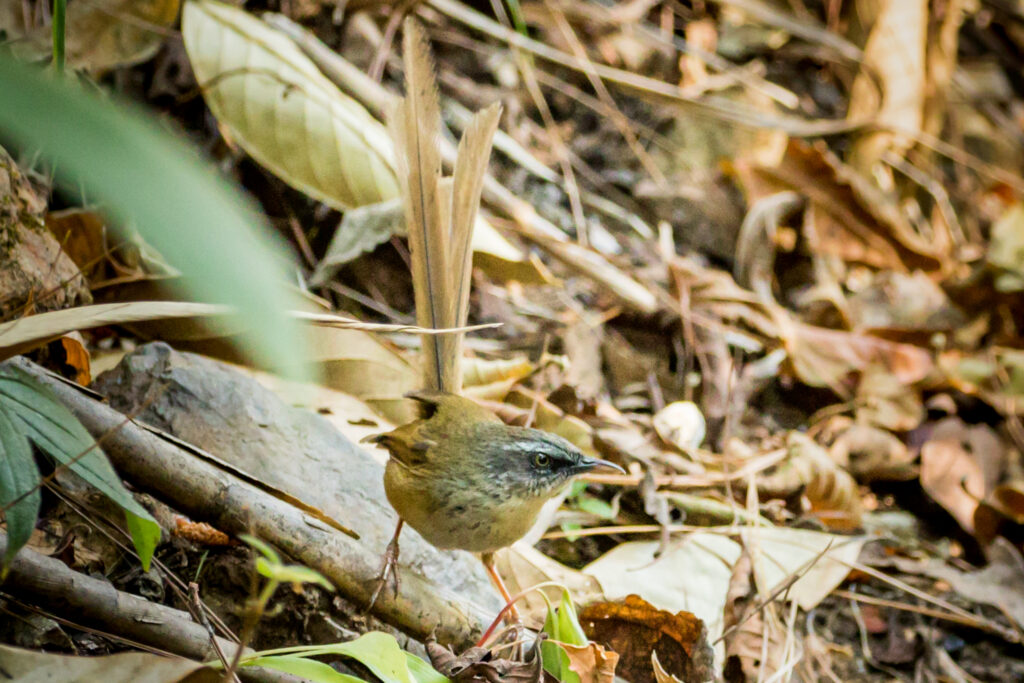 But Wait!  There’s more!  The last visitor to the morning blind was a Siberian Rubythroat.  This striking bird has a bright red patch on its chest and is often seen with its tail up behind it: 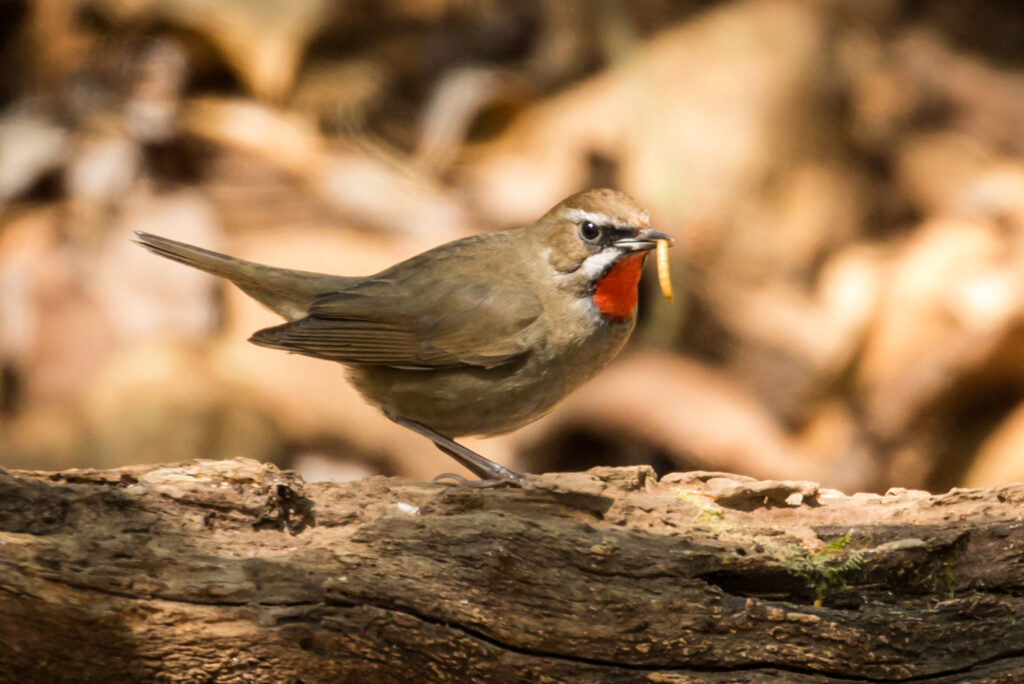 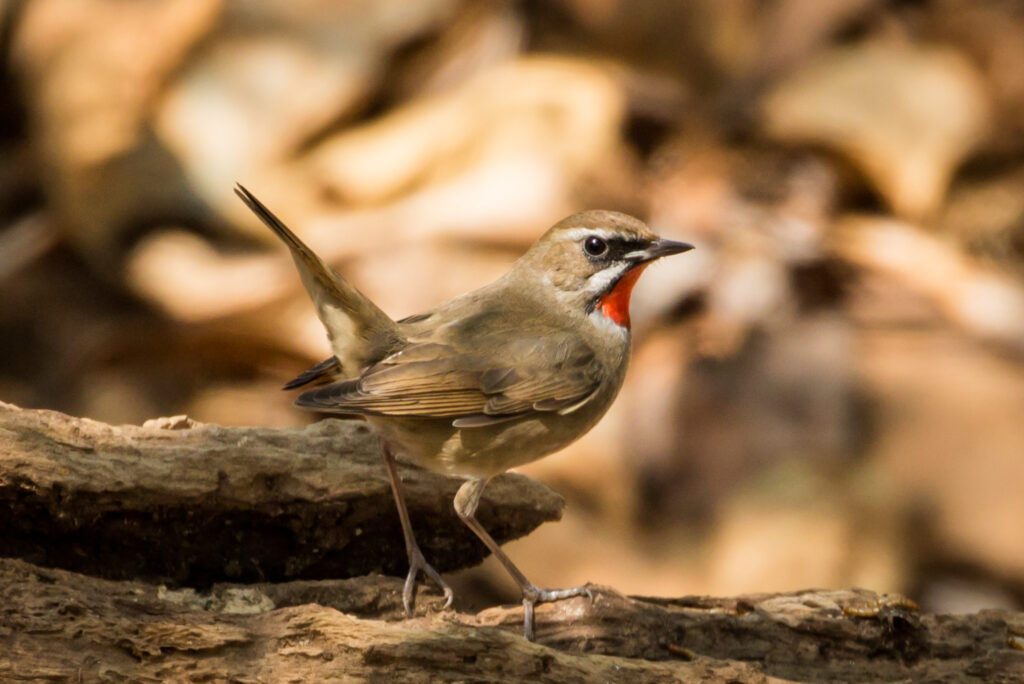 We ended up staying almost 2 hours at the blind and we had to move on – either we ran out  of mealworms or out of time.  After lunch we took a stroll down the road looking for birds above us.  As we walked through a tall grove of trees we saw two different types of nuthatches. The first one was a Giant Nuthatch, which looked to be about 50% bigger than our White-breasted Nuthatches here in the U.S.  The second was  Velvet-breasted Nuthatch which had a striking eye. 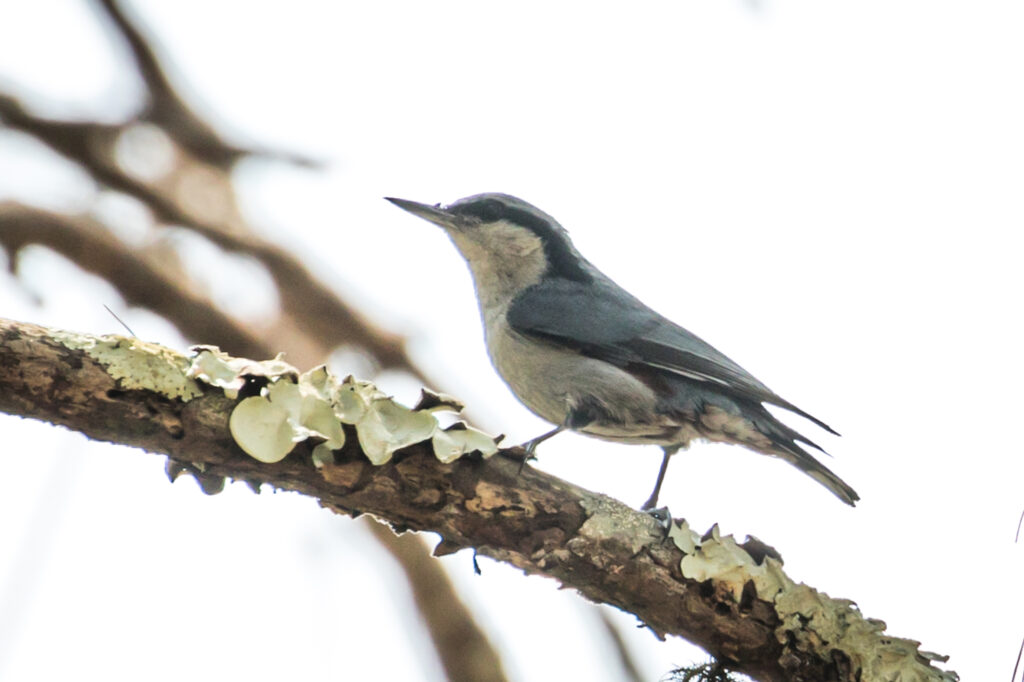 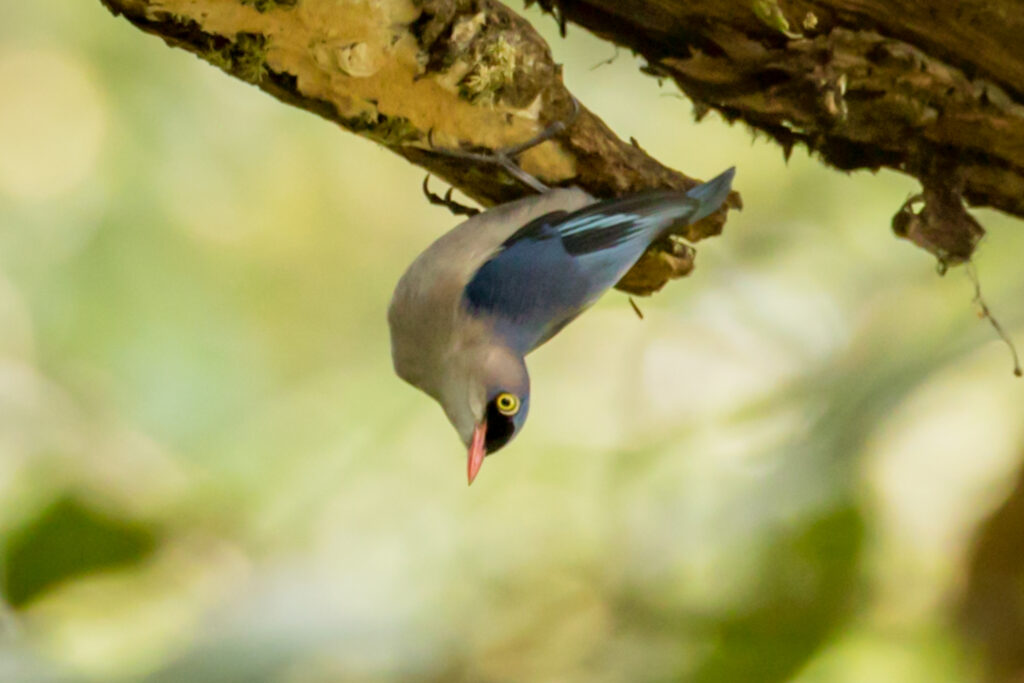 Just down the road from the nuthatch was a Crested Finchbill.  Note the lovely green feathers on its back and the large black crest standing up:

Back into the vans for a 30 minute drive up the mountain.  Peter was ever vigilant in search of birds: 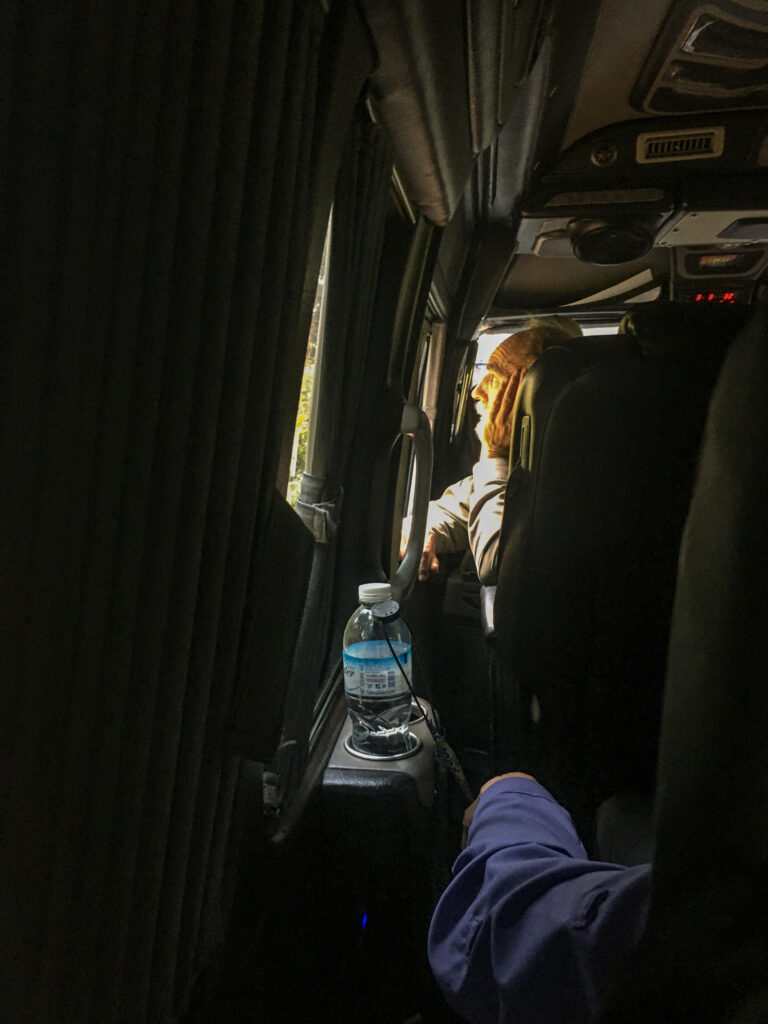 We arrived at our destination and were lucky enough to have a Spot-breasted Parrotbill feeding in the stalks alongside the road.  This was one of the better views of any bird on the trip – took too many pictures, as usual: 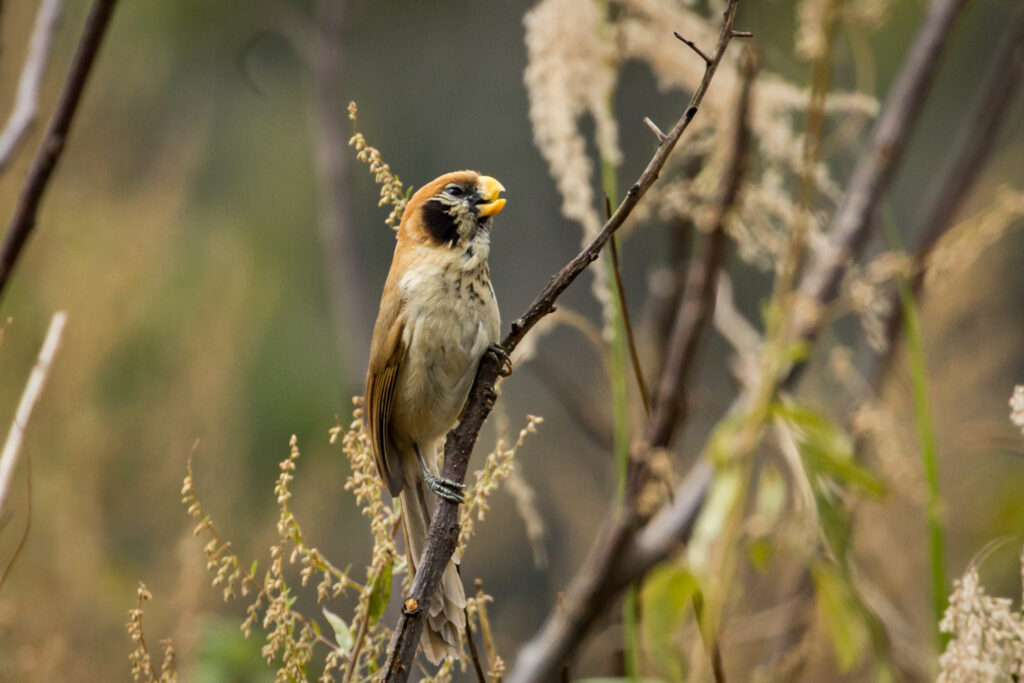 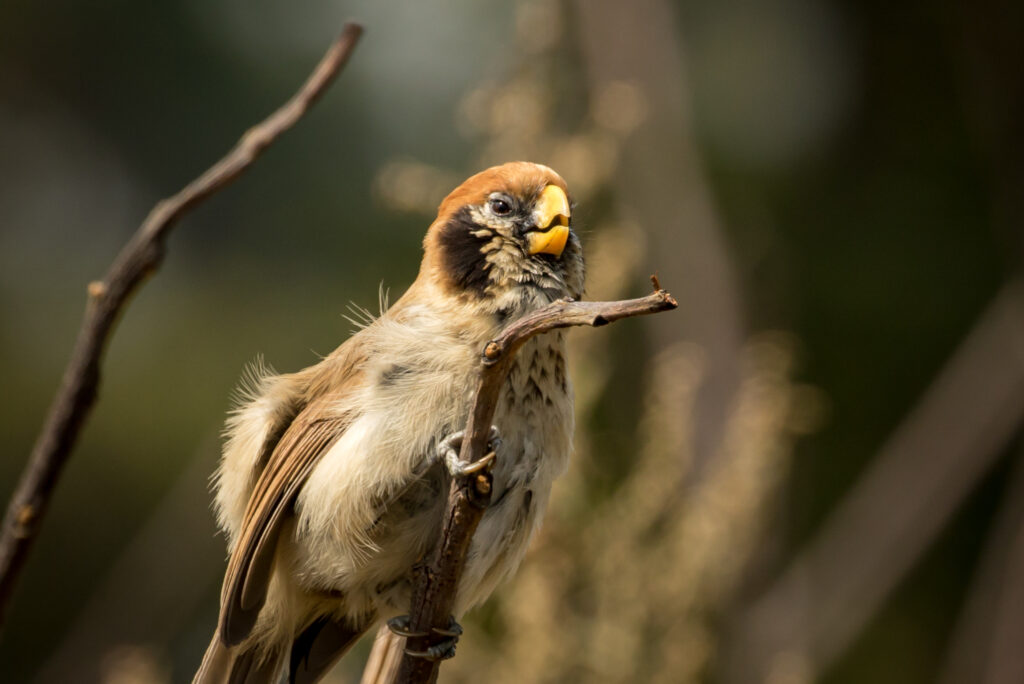 We actually set up our chairs in the middle of the road and birded for a good 45 minutes.  Being mid-afternoon there really weren’t many around, but it was a relaxing way to while away the time.  We jumped back into the vans and made our way to our next blind.  Just a short walk off the road, we settled down and were treated to the arrival of a Gray Bushchat: 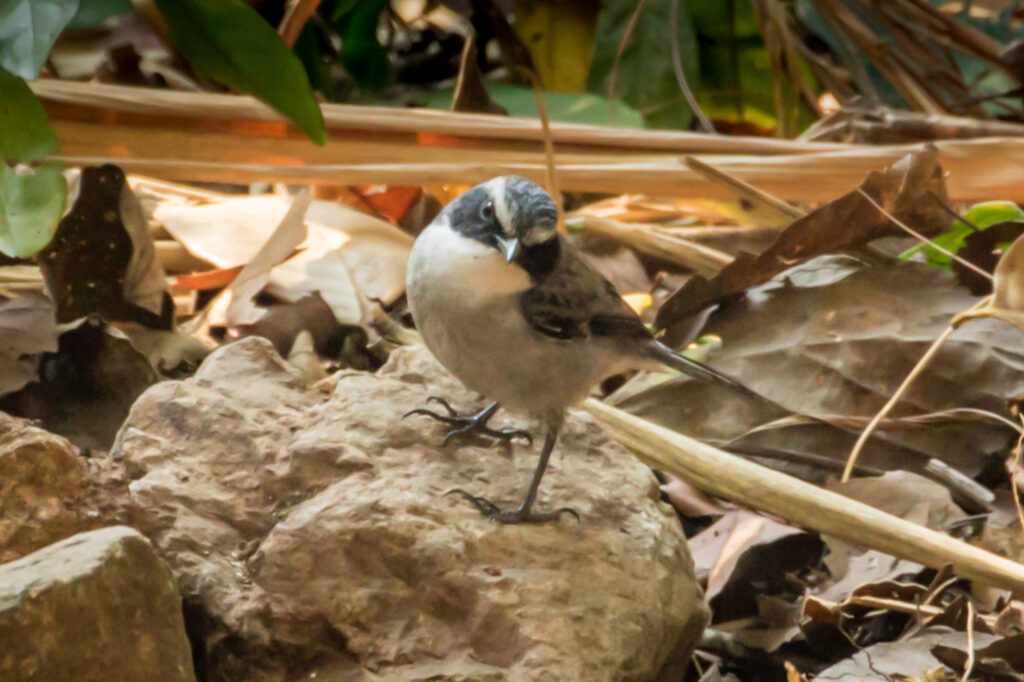 Then an Ultramarine Flycatcher came in for a mealworm feast: 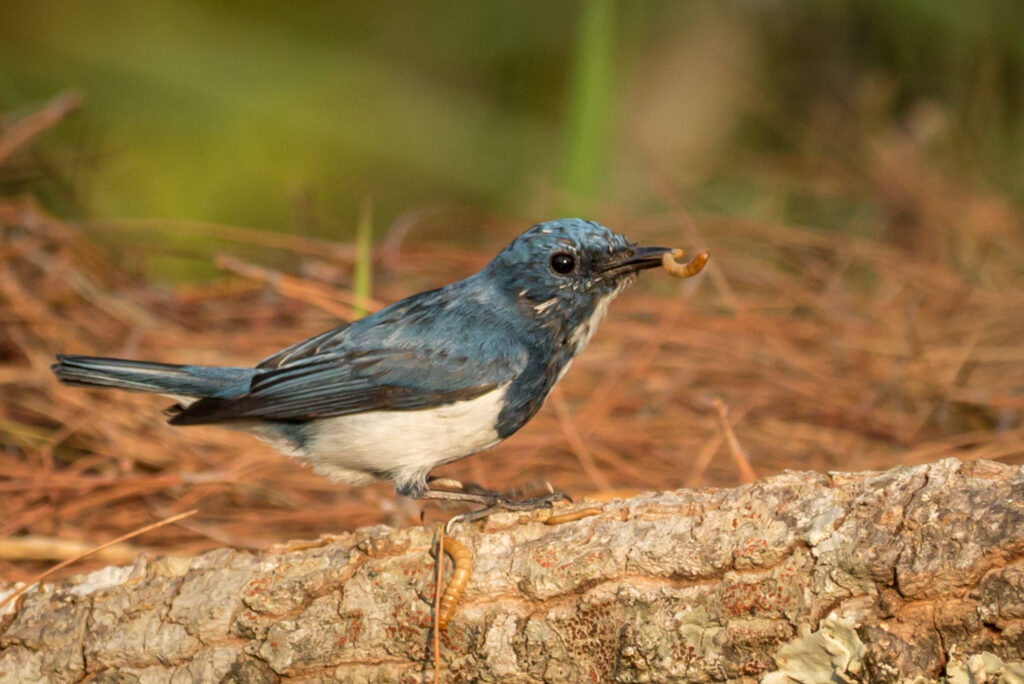 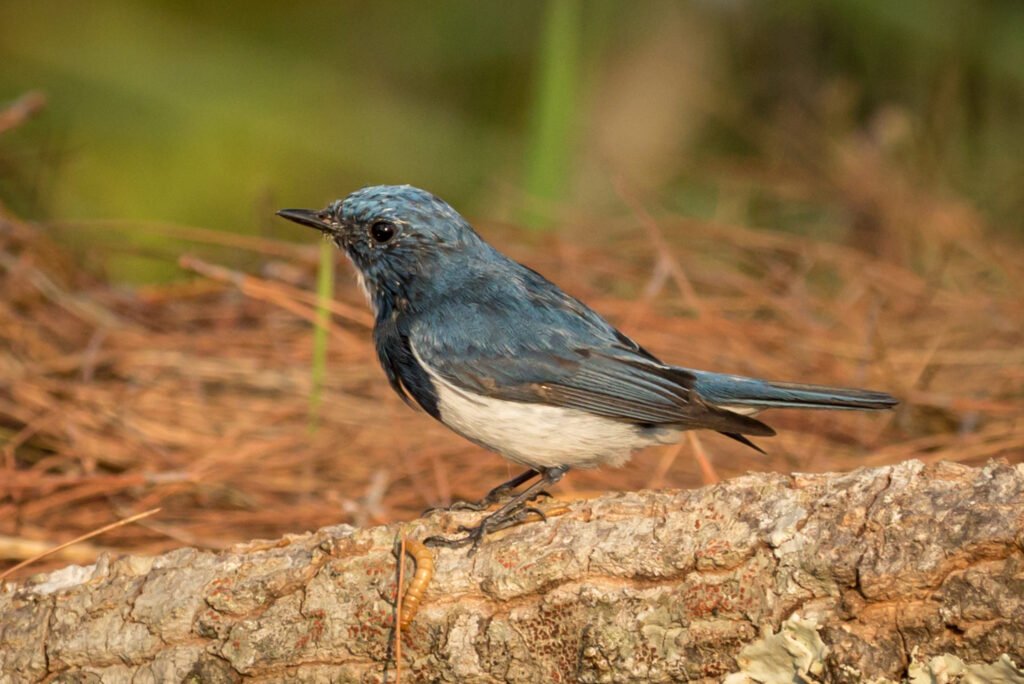 Reflecting the birding that evening I felt this was one of our most productive days in Thailand!  We saw a wide variety of birds -all Lifers- and some pretty good looks at them, too.  Tomorrow we are again in Doi Pha Hom Pok National Park, but go to the east ridge to continue our explorations.  To read about that day and see the pics click HERE.

For you overachievers is the Ebird checklist for that portion of our trip.  This is the only day our guide Dave limited himself to one checklist:

Loved reading about this day of yours, and the photos are great!