Since the beginning of May I have been bemoaning the lack of migrants – warblers in particular.  If you are unfamiliar with warblers imagine a brightly painted ping-pong ball careening around the limbs of a tree. I just love them!

A “Blocking Mass” (as brother Doug called it) was over the Chicago area for weeks effectively halting most migrants from flying north.  Last week we noticed that the wind direction was predicted to start blowing from the south, hopefully pushing those migrants up north.  We decided to get up very early and drive down to Montrose Point on Saturday morning and see if any migrants were there.  They came back!

Crowds of people clustered together on the path peering into the “Magic Hedge,” which at one time was a shrub outside the barracks of an airbase located there in the 60’s. 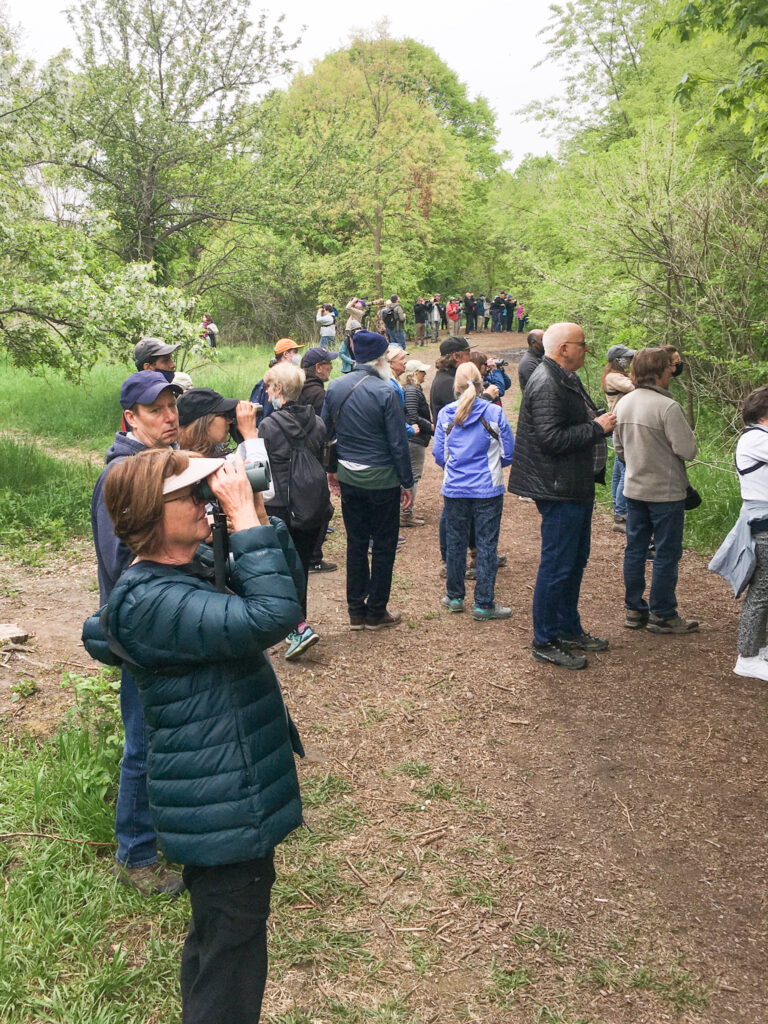 The barracks are long gone so on Saturday the “Magic Hedge” housed warblers – and lots of them.  It was thrilling to just scan the bushes and trees to see a dozen or more birds 5 to 10 yards away.  One of the first warblers we saw was a male Common Yellowthroat which was so happy to be back in Chicago it was singing away its familiar “Wichity.  Wichity.  Wichity.” song. 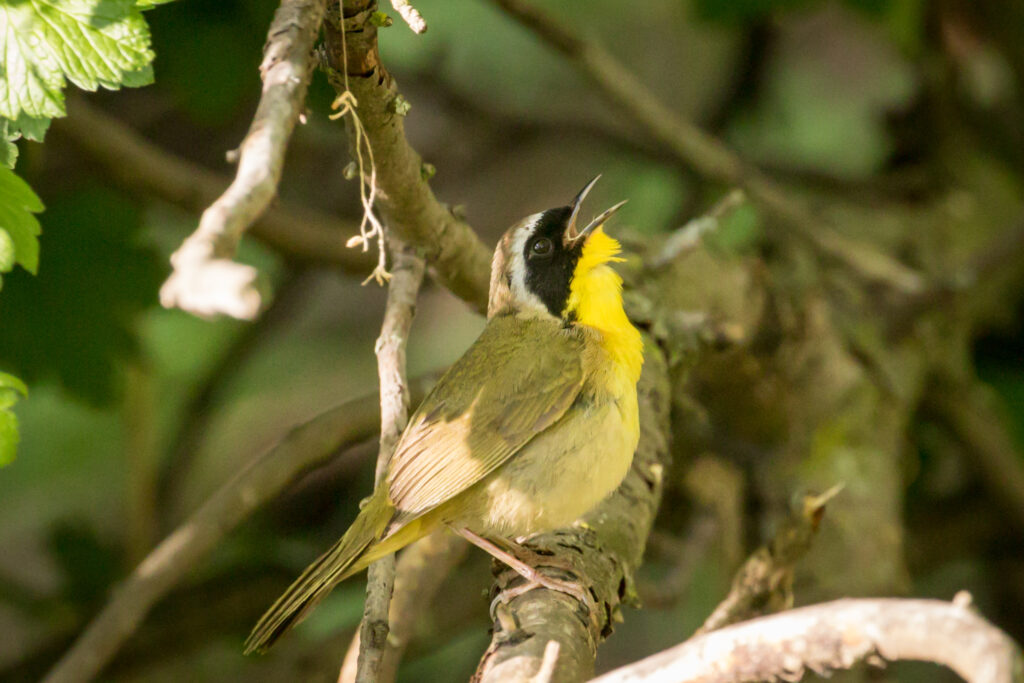 Flitting around too were several male Redstarts with their Creamsicle orange and charcoal black colors and long tail wagging up and down. 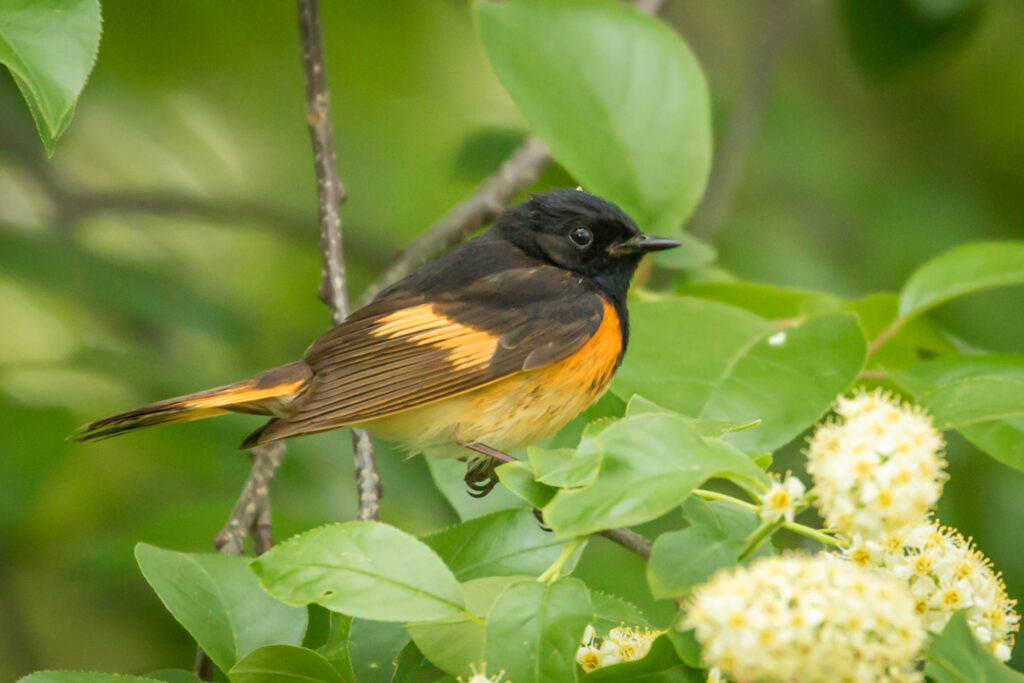 One tree off to the northeast of the area had a couple of Chestnut-sided Warblers in a feeding frenzy in it.  They dove from limb to limb grasping at tiny insects that were buzzing around the leaves.  They were pretty far back in the tree but one suddenly hopped out into the open on a dead limb right in front of me.  It stayed there a minute or so feeding on the branch and giving me some excellent views of its wonderful colors.  Too soon it flew back into the safety of interior of the tree and I called “Thank you!” after it to show my appreciation for the great show it gave us. 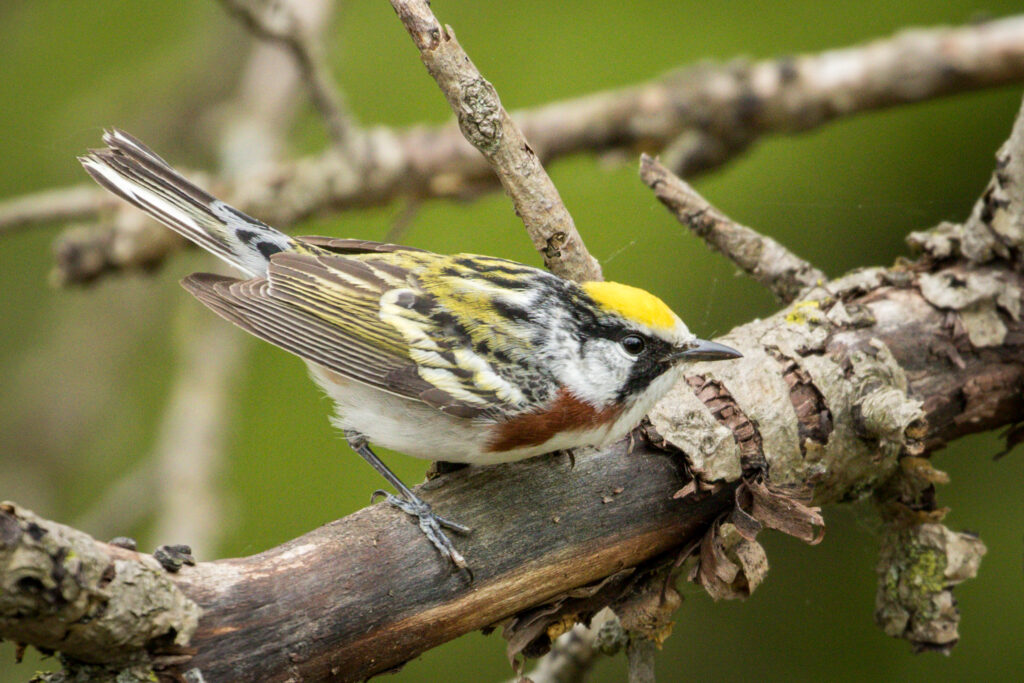 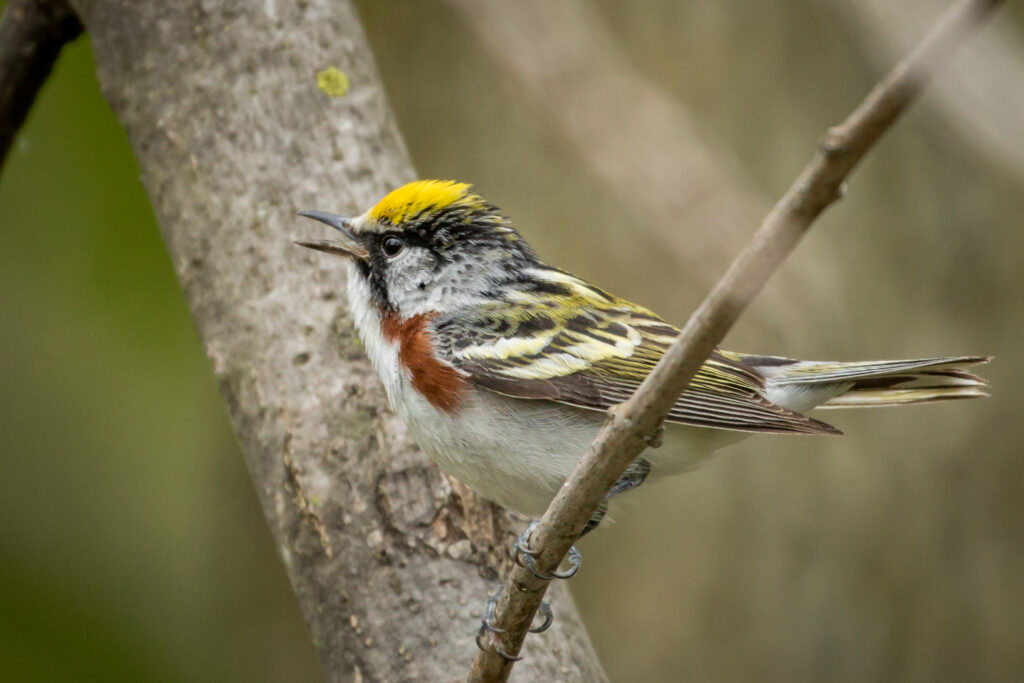 Whenever you see a crowd of people with cameras and binos all focused on the same spot you know something good has been found. 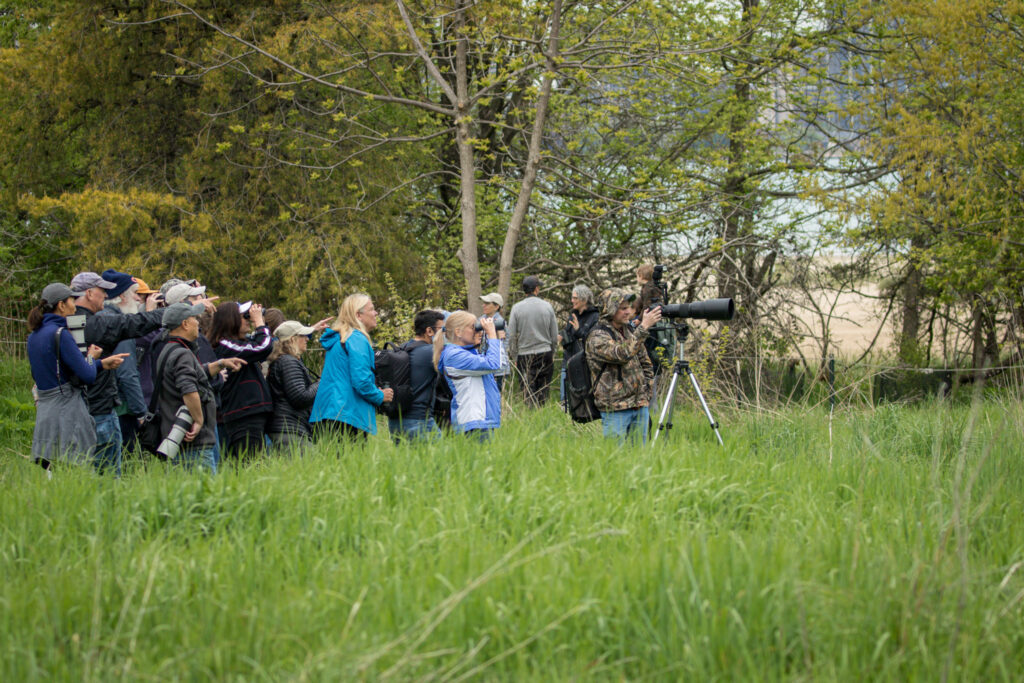 Our birding buddy Jayne brought us over here to see a rare Whip-poor-will roosting in the middle of a tree.  There was a small window through the leaves to see this rare bird for our area.  I had never seen one before but Karen had heard them before long ago as a kid in Michigan and was absolutely giddy that she got to actually see one. 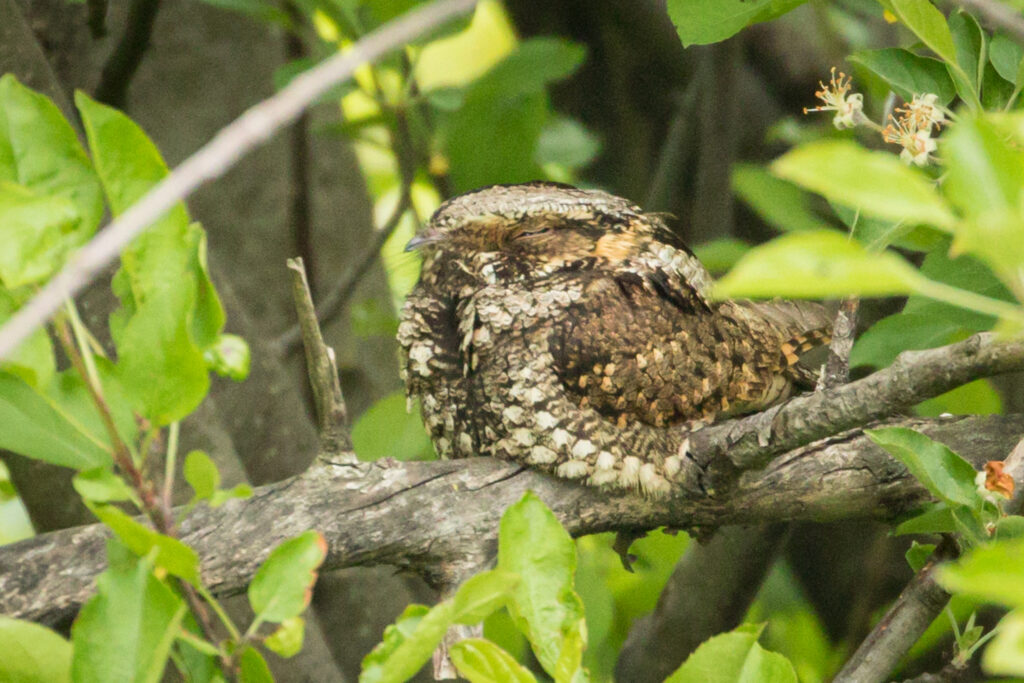 As the day wore one we continued to rack up more First-of-Year species.  Everywhere we went we saw warblers and other migrants like Blue-gray Gnatcatchers and White-crowned Sparrows.  In fact we ended up with 72 species that day (for comparison we went to Montrose about a month earlier and saw 32 species).

It was cloudy all morning and just after noon the predicted rain started as a drizzle.  For some reason this seemed to encourage some of the rarer warblers to become more active.  Following a small crowd who was seeking a Hooded Warbler I set up where it had been previously seen (the warbler seemed to have a route it took around the area).  Hooded Warblers are not “rare” but they are infrequently seen and always sought after by birders.  Sure enough it hopped up on some branches as it fed on the insects near the ground. 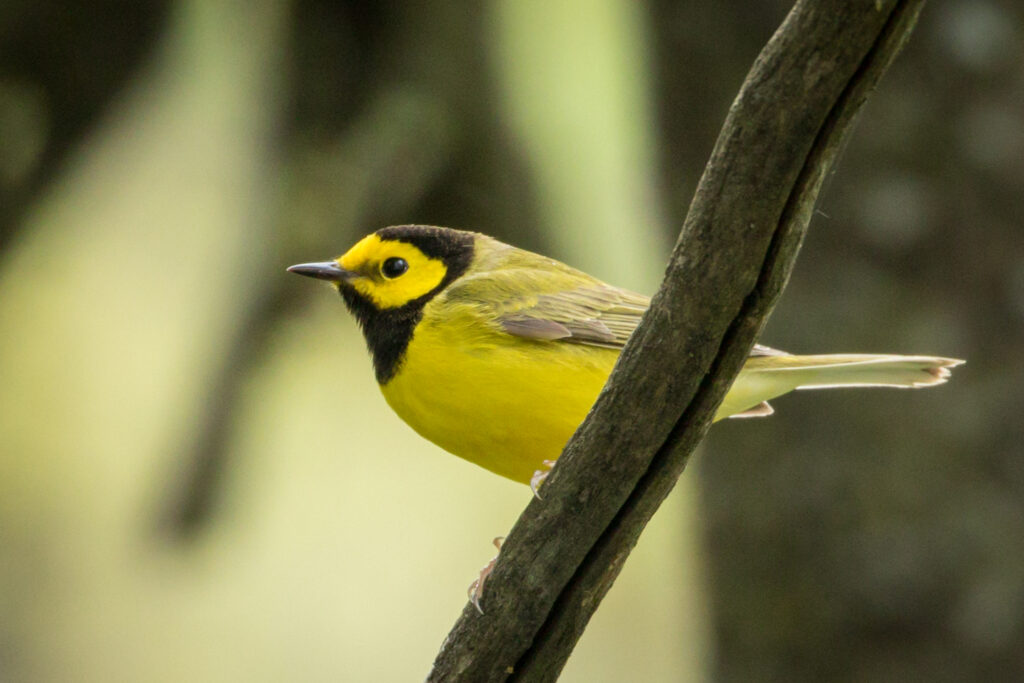 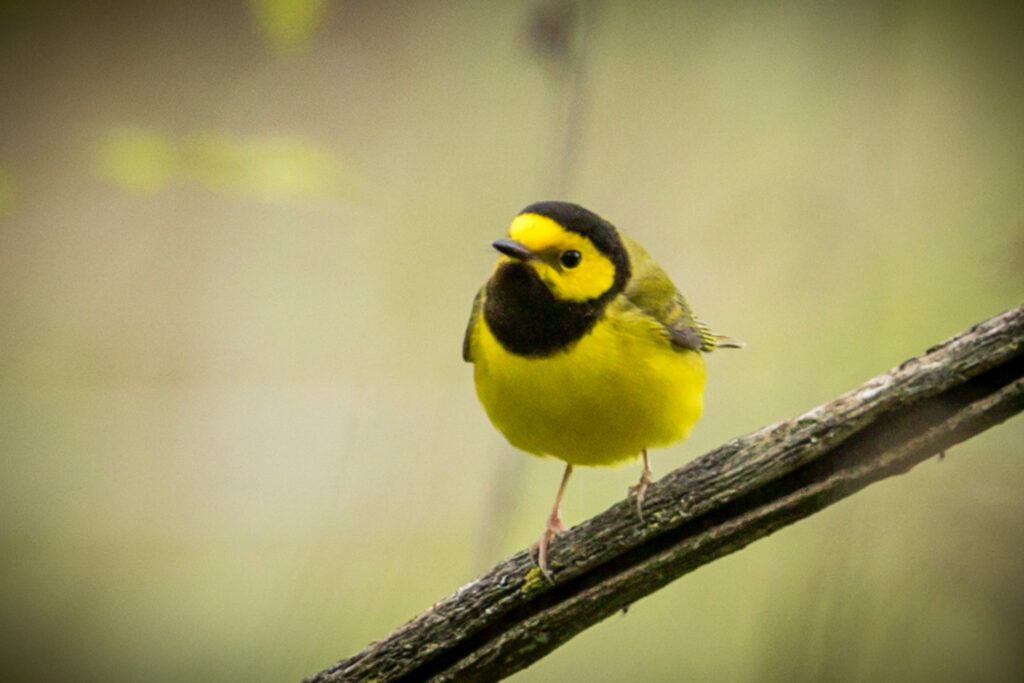 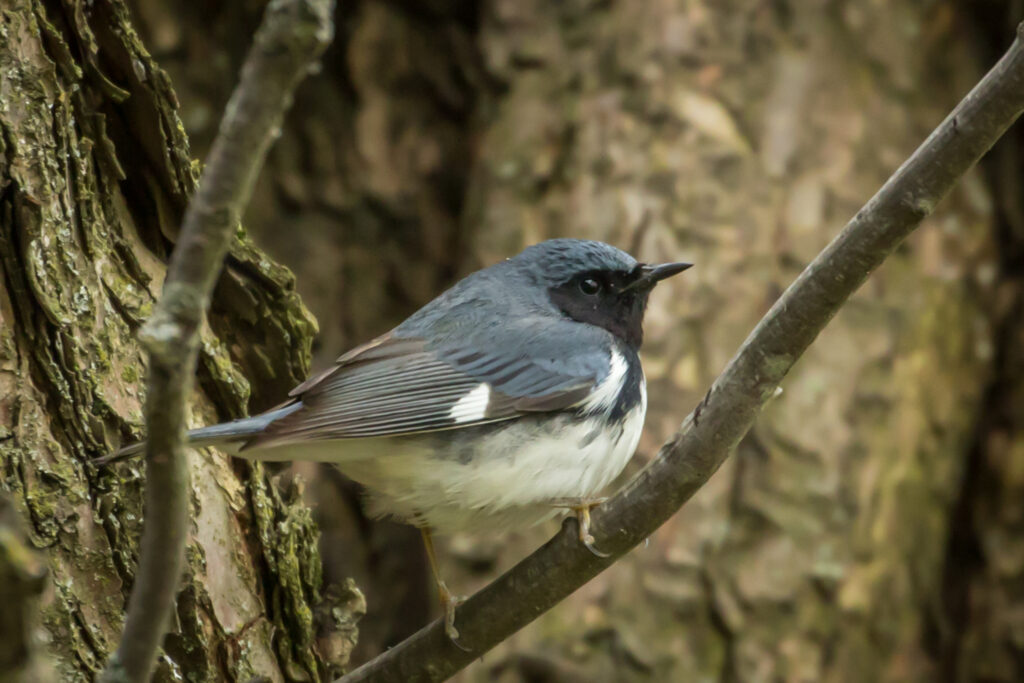 So they came back!  The wonderful warblers that bring joy to all who wait for them each spring came back!  I knew they would be back. I did.  I never doubted it for a minute.  Really.  Of course I’ll go through all this anxiety next spring.  Do you think they will come back then?

If you would like to learn more about GreatBirdPics.com CLICK HERE.  Members can share their own GreatBirdPics, communicate with other members, and receive regular emails about bird photography.

So exciting! I was there yesterday and today and forgot to look for the whippoorwill