After being closed to the public since March, Chicago’s Lakefront was opened up on Monday, June 22, 2020 so we decided to go down the next day to Montrose Beach to see Chicago’s famous Piping Plovers Monty and Rose.  It’s about a 50 minute drive from our house to Montrose Beach, which is on Chicago’s beautiful lakefront along Lake Michigan, about a mile north of the Magnificent Mile.  We were excited to be going back to Montrose and as we took the exit off of Lake Shore Drive toward the beach we encountered a police blockade of the entrance to the harbor and beach areas.  The police explained that the beach was open, but to reduce the number of people they were not allowing cars to enter the area.  So we had to turn west and search for parking on the busy residential streets about a mile away from the beach.

Montrose Beach is actually considered one of the parks within Lincoln Park, a 1,000+ acre landfill stringing along the Lake Michigan.  What makes Montrose Beach so special is the variety of birds that have been seen there.  Shorebirds, gulls and terns are usually present, and during migration season it is an attractive stopover for warblers and other migrants.  Being one of the few green spaces along Chicago’s Lake Michigan waterfront warblers traveling north in the spring will set down there before continuing their northward migratory path along the shores of the lake.  We were sad to have missed them this spring due to the COVID closure of the park, but followed reports that Monty and Rose had returned and had hatched four chicks.

Monty and Rose (get it?  Monty and Rose; Mont-Rose Beach) were made famous in 2019 as the first mating pair of Piping Plovers seen in Chicago in over 50 years.  They made the news when a large music festival scheduled for the area was forced to cancel their plans so the plovers wouldn’t be disturbed.  Even a documentary about them was filmed (you can get information about it with a link to view it on VIMEO HERE).

As we walked in to the Montrose area from our parking spot we first came to Montrose Harbor, which contains 711  boat slips.  Our attention was drawn to the Purple Martin houses and we watched their comings and goings over the harbor and back to the houses.  You can click on any of the bird pictures below to go to their GreatBirdPics.com entry. 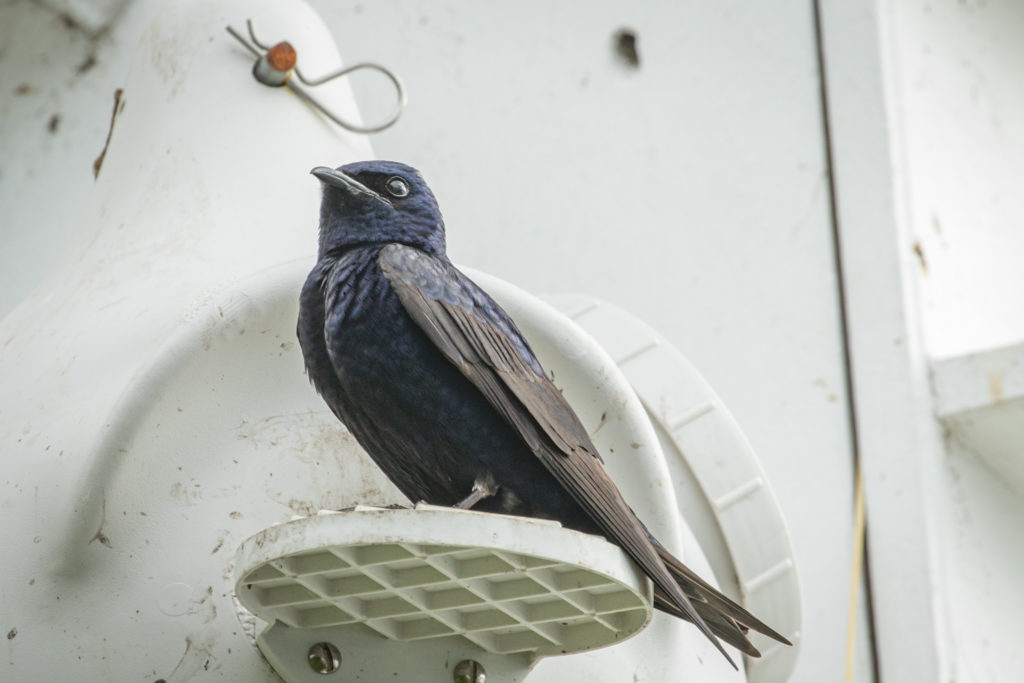 The pic below shows one peeking out of the second story flat on their neighbors below, which includes a female on the right. 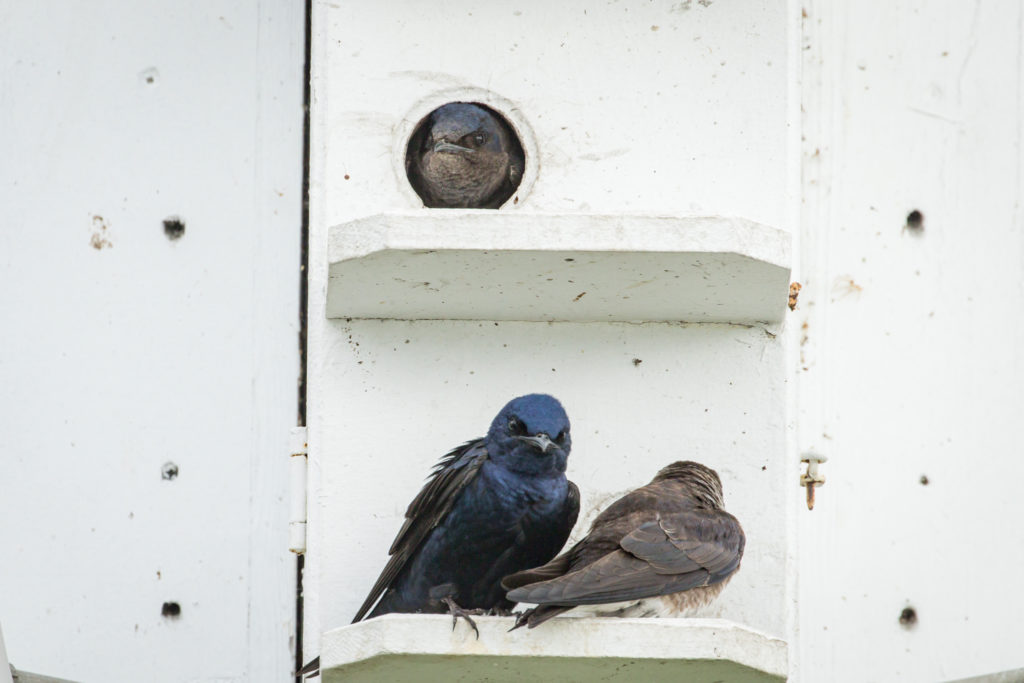 Leaving the harbor behind it was another 7 minute walk to the beach where Monty and Rose were living.  As we approached the area we were surprised that there weren’t more people there.  Last year on a beautiful day like this there would have been 40-50 people lined up along the breakwall observing the Piping Plovers.  Now with limited access there were two monitors and two visitors.

The monitors are local residents approved by the National Fish and Wildlife Service to observe the nesting area and to help control and educate those that come to see Monty, Rose, and the chicks.  We chatted with them a bit and were saddened to hear that one of the four chicks had not been seen for a day, presumably lost to a predator. The monitors are not supposed to intervene if a predator like a gull, raccoon, or recently spotted Peregrine Falcon enters the area.

The area the plovers were raising their chics in is now enclosed by sturdy fencing,  The fence used last year was much flimsier and covered a much smaller area; this one is very sturdy and covers an area of about 2 football fields.  Which predators does the fence keep out?  The human ones!  Bird enthusiasts, photographers, and curious visitors are kept at bay from the area so as to not disturb the family.  The monitors stood about 30 yards away from the fence, so I asked them if I could get closer to take some pictures.  They agreed on the condition that if the birds became agitated we should back off.  At one point one Rose started to walk right toward us while we were standing near the fence and a monitor did asked us to step back.

Monty and Rose were very visible and Monty was closest.  Note the bands on his legs below: 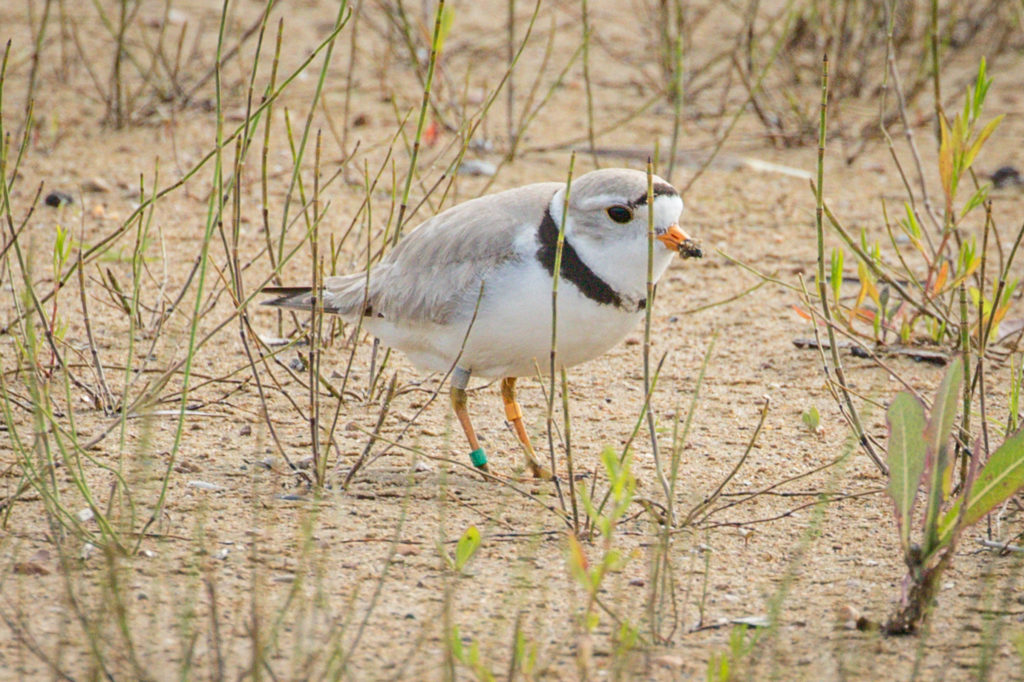 If you look closely you can actually see three bands.  There are two on his right leg, a green and metal one, and a yellow/orange on on her left leg.  The monitors told us they believed both Monty and Rose were banded in Muskegon, Michigan.  Here’s another pic of Monty: 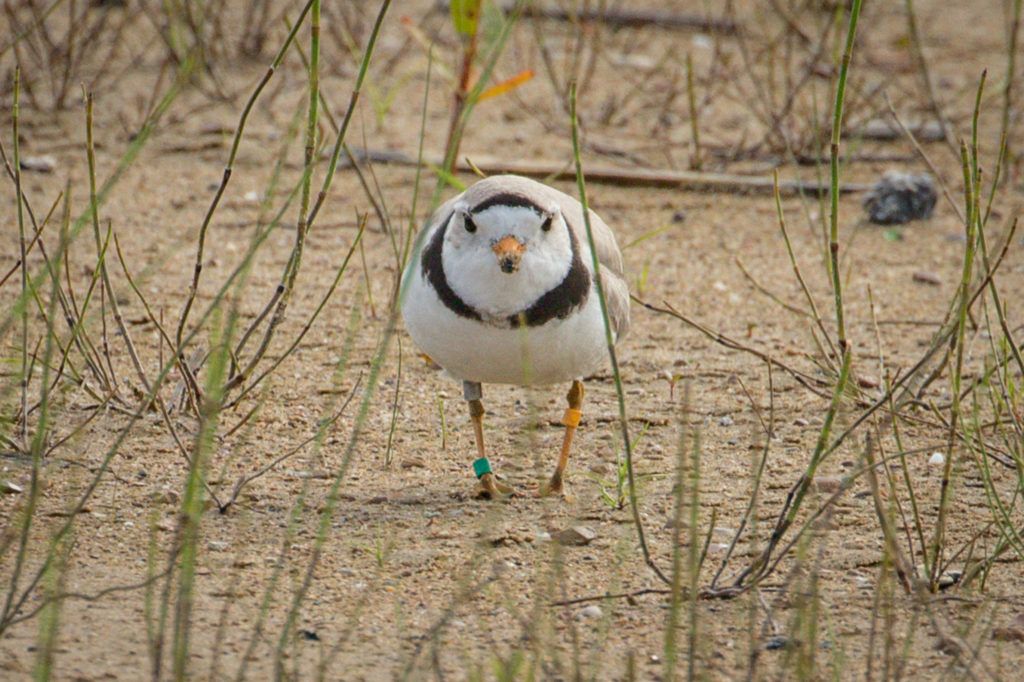 Rose stayed farther as she foraged for food.  She has a blue band on her right leg.  Also notice that the black band across her forehead notches down in the center while Monty’s is straight across. 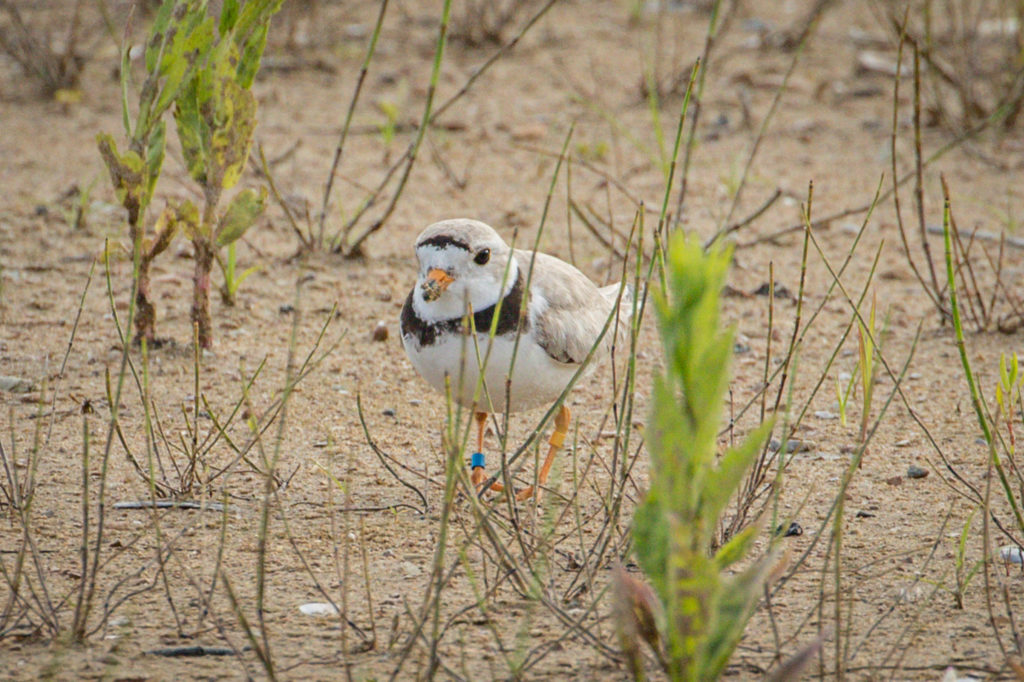 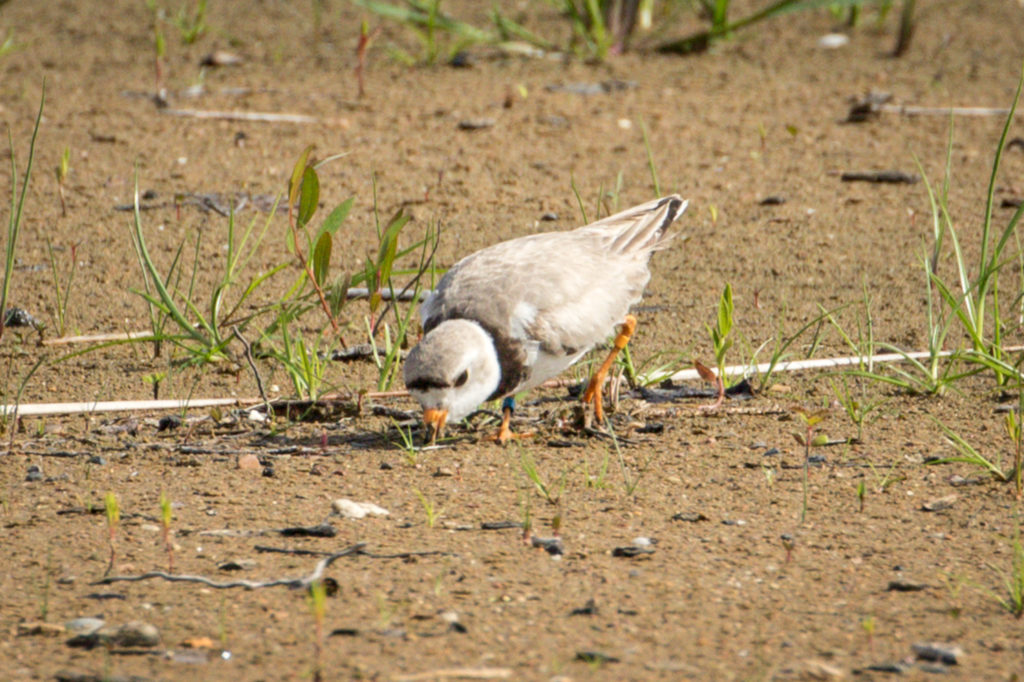 The chics were pretty far away but Karen managed to get a shot of two of them with Rose: 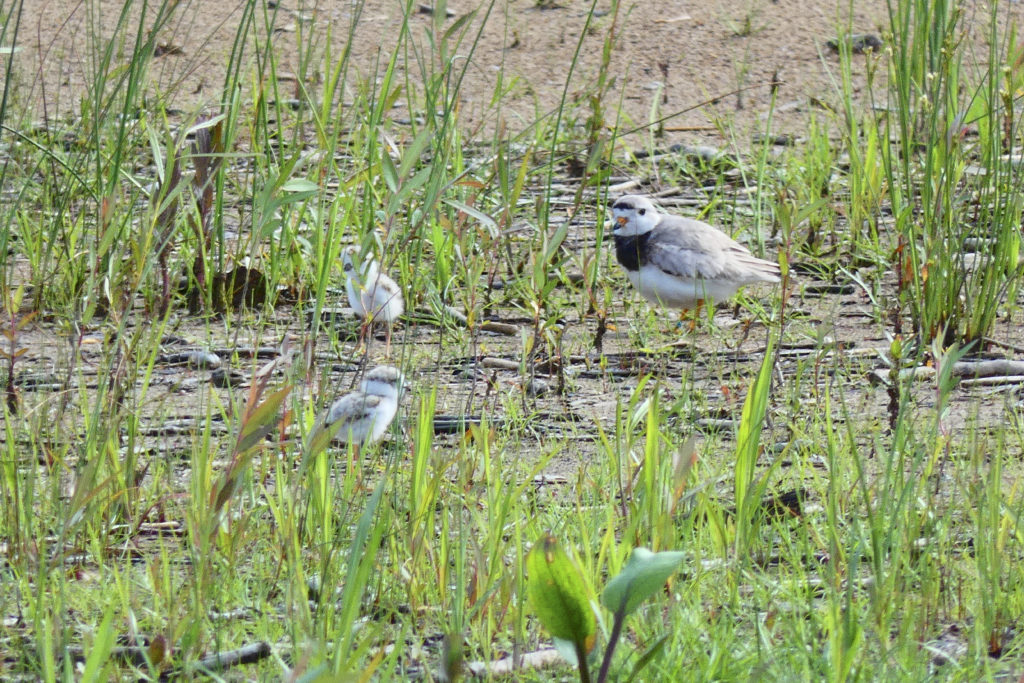 I tried to get a closeup but the distance prevented me from getting a clear shot, but you get the idea – a cute little fuzzball! 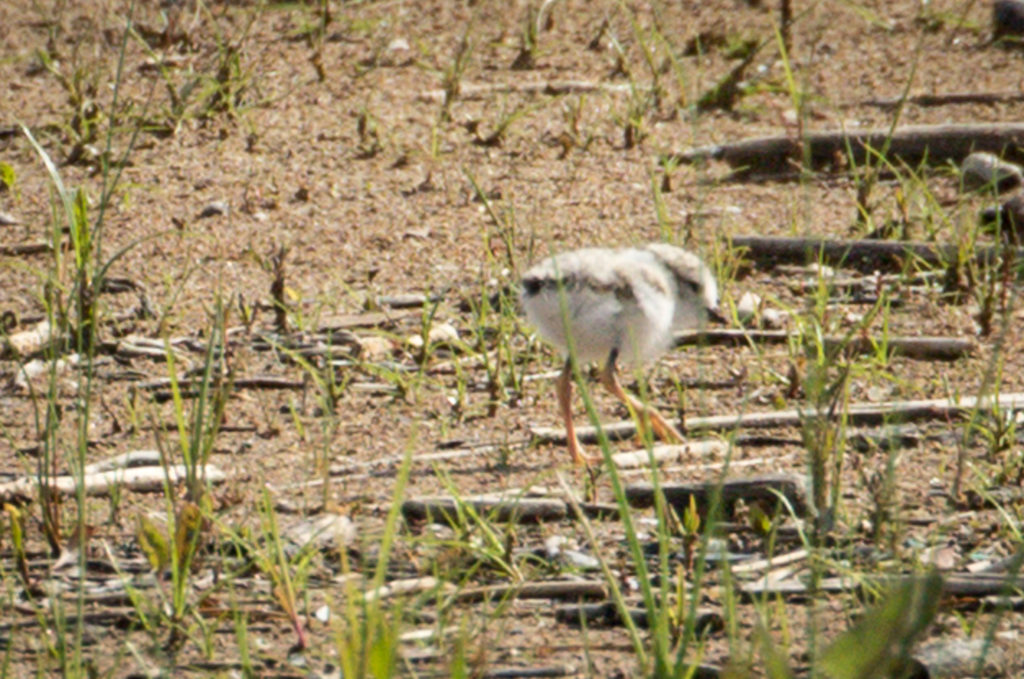 It was fascinating to see Monty and Rose protect their territory.  Several Killdeer were foraging in the vicinity, and if they got too close Monty or Rose would fly right at them, screeching loudly until the Killdeer (twice the size of the plovers) backed off.

Adjacent to the piping plover area is a sand dune where Bank Swallows like to nest.  Some like to sit on the rope in front of their nesting area and I couldn’t resist trying to get a BIF shot. 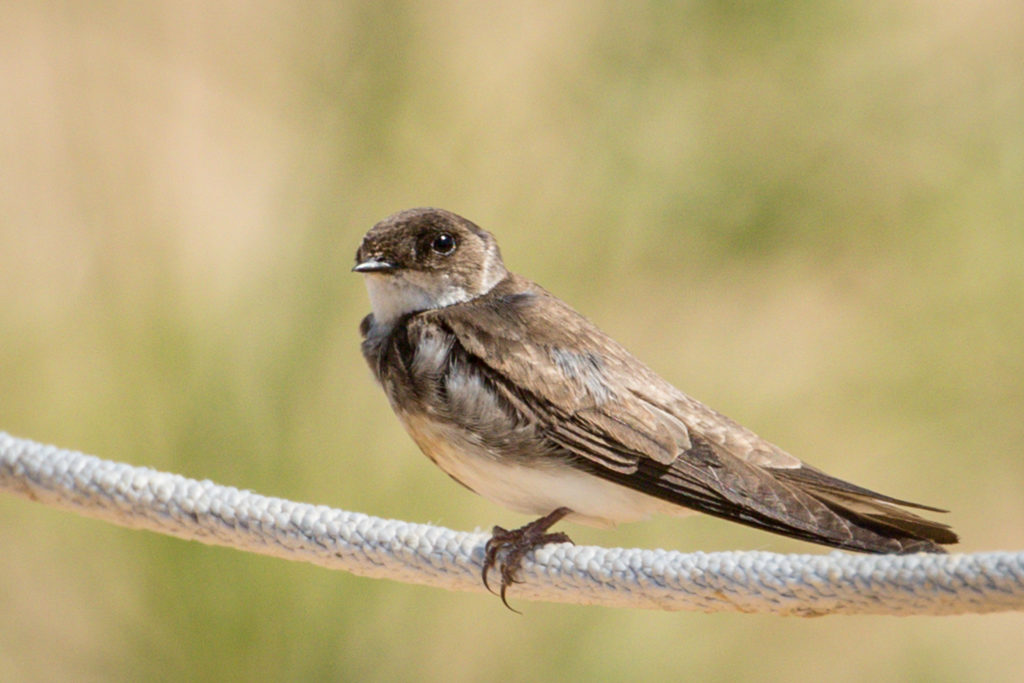 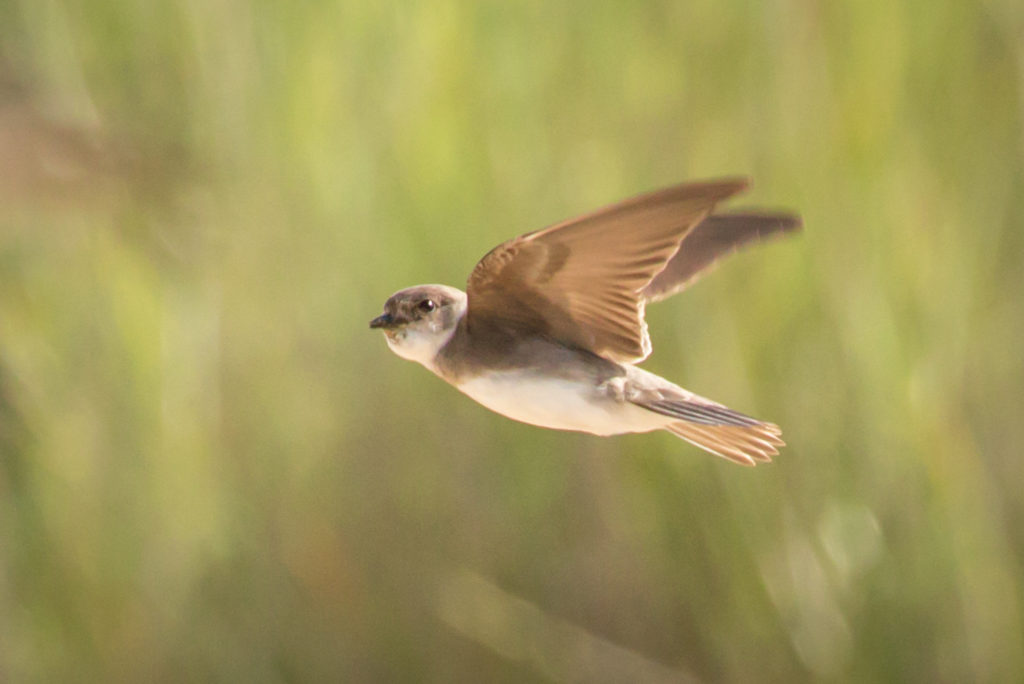 After awhile we decided to walk around more of the beach to see any other birds in the area.  As we walked down the pier we were surprised a the height of Lake Michigan.  Below you see a couple of trees on the beach – last year we used to walk the far side of them on the beach! 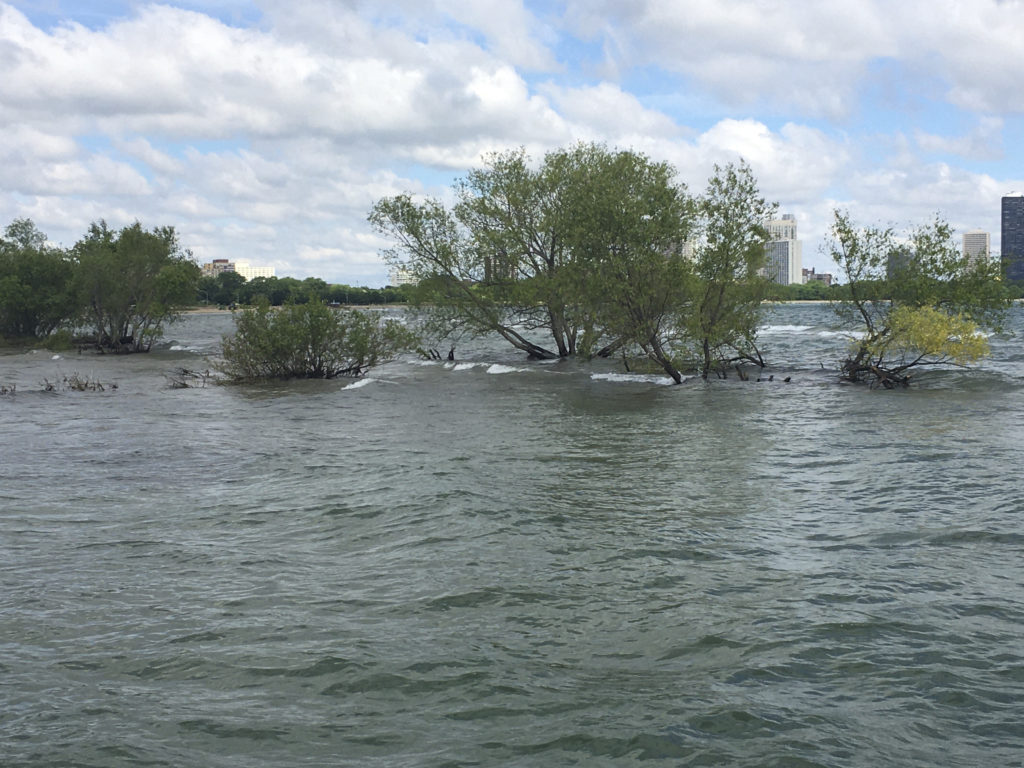 As we walked further out on the pier we spotted this mama Mallard acting like a lifeguard as her chicks took a dip in Lake Michigan. 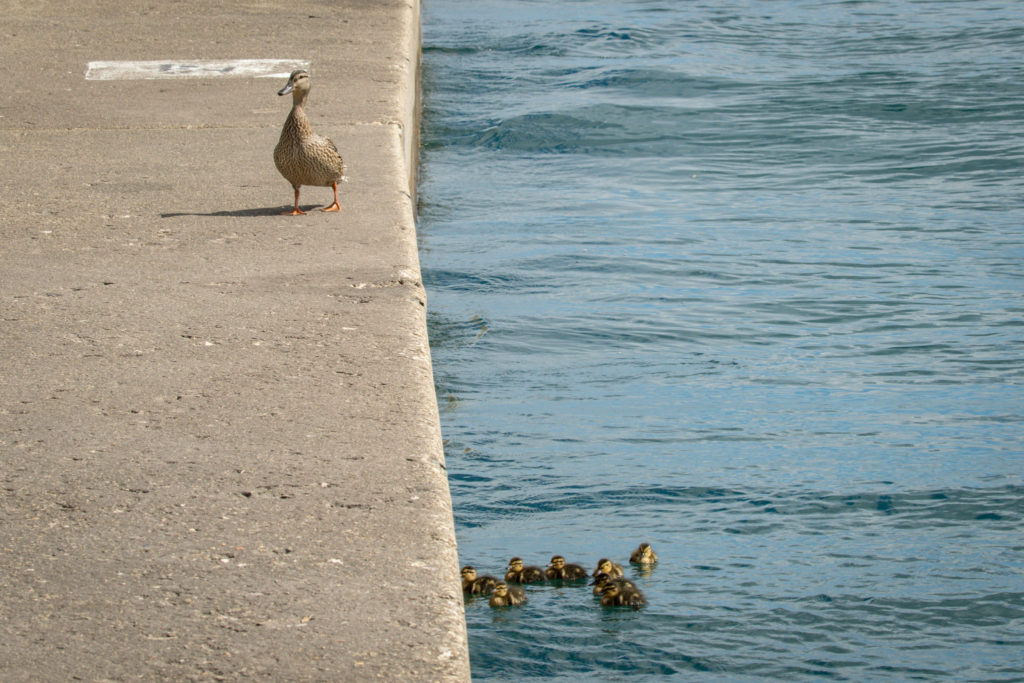 Back around in the harbor area we spotted an immature Red-breasted Merganser in among the boats.  These mergansers are common in the winter time in this area, but all but this one headed north months ago. 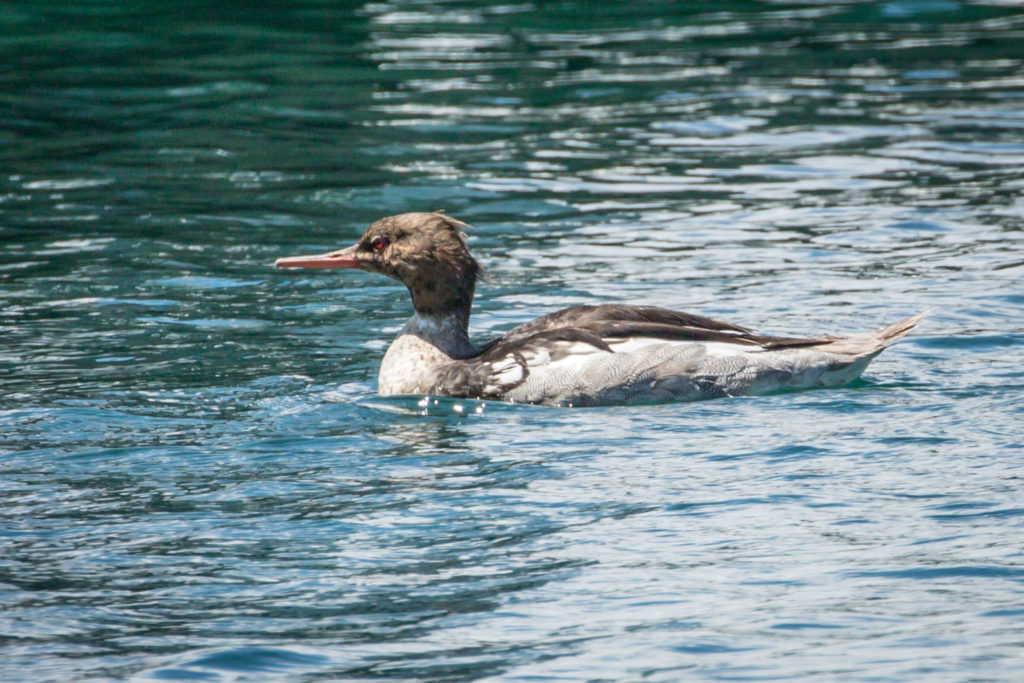 We headed back to the beach area on our way out and watched all the Ring-billed Gulls and Caspian Terns there.  There were are a couple of gulls in the fuddles (temporary shallow bodies of water created by lake water sitting in low areas of the beach).   One small object in the middle wasn’t a gull and we tried to get an idea what it was.  See if you can figure it out from these pics: 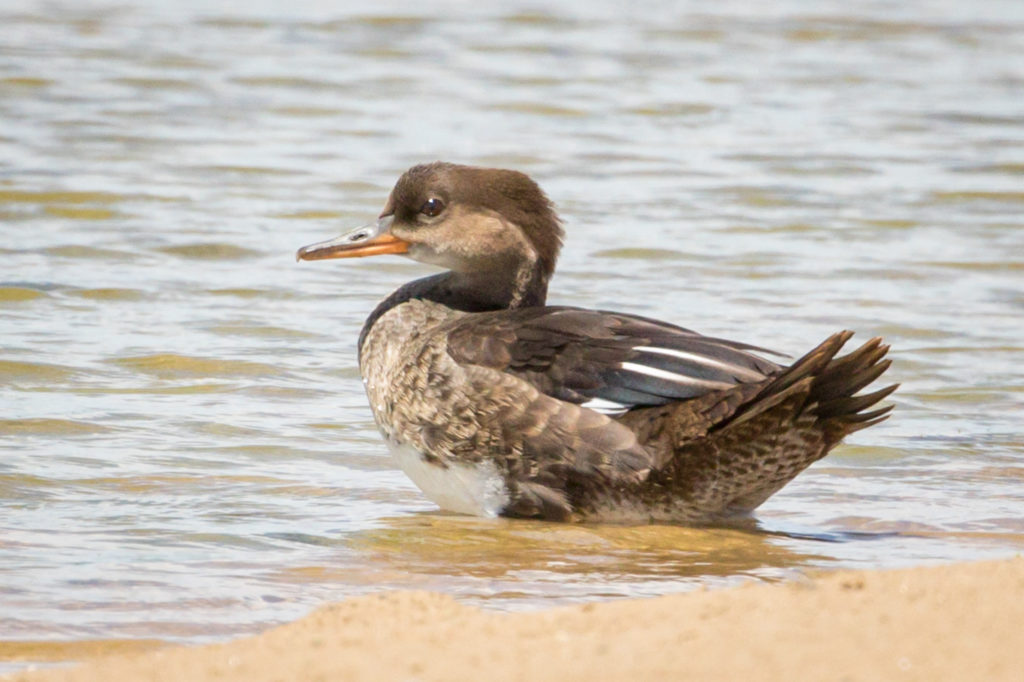 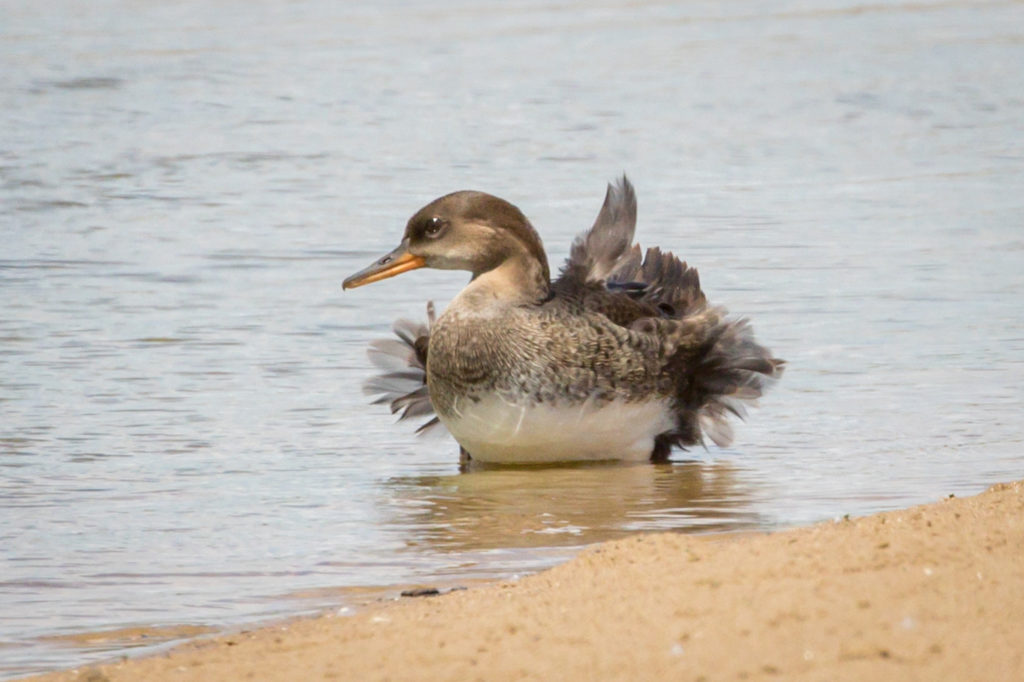 After much debate Karen and I concluded it was an immature Hooded Merganser.  Were we right?

Well we successfully found our target birds Monty, Rose and family so we decided to walk back to our car and grab a bite to eat and then head home.  We had a great day on Chicago’s beautiful lakefront and hope that Monty and Rose continue returning here for many years to come.

Thank you for sharing such a pleasant story.

Loved the story and pictures!

Great shots of all! I still haven’t seen the Plovers in person, maybe they’ll be back next year.