Prairie-Chickens In The Platte River Basin

Viewing Prairie-Chickens from a Bus Blind 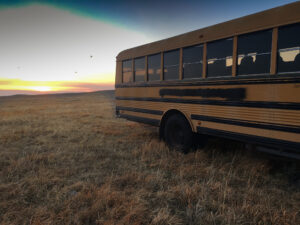 We traveled to North Platte, Nebraska* for two Target Birds – Sandhill Cranes and Greater Prairie-Chickens.  It was impossible to miss the Sandhill Cranes – they were all over the place.  Prairie-Chickens were not as numerous and you had to know where to look so we signed up for a birding tour to have a better chance of finding them.

There were a couple of Prairie-Chicken tours available and we selected Dusty Trails’ Prairie-Chicken Dance Tour.  We had a great experience on their “Sandhill Crane Evening Viewing Blind” tour* so we were hopeful that this one would be just as successful.   We met by the rickety old school bus at 5:30 AM and it was pitch black out.  As we took off from North Platte on our 30 minute drive west Dusty explained that we wanted to be in position before the Prairie-Chickens started arriving at first light.  We turned off the road and drove between some farm buildings (I swear, people there were living in an old refrigerated truck trailer previously used to transport tomatoes) and continued down the fence line into the fields.  We bumped and lurched over tractor tracks about a mile into the middle of nowhere – we we so far out that most of our smartphones automatically changed to Mountain Time!

We stopped in front of a Porta-Potty and began our wait in the darkness.  The bus was our blind so we had some concern about those participants who were not wearing masks but with the windows open and adequate spacing we felt comfortable.  It wasn’t long before we heard the Prairie-Chickens.

Their sound was unlike any bird song I’ve ever heard!  Sibley’s Guide to Birds put it best, “like air blown across the top of a bottle.”  But lots of bottles at the same time – a long low moan wafted toward us when the first glimmer of light on the horizon was visible. This sound is called “booming” (some people refer to Prairie-Chickens as Boomers).  As it got lighter the booming got louder and occasional “yips” and weird clucking sounds were heard.  When it was just barely light enough to make out the field before us we could see shapes moving.

Our bus was parked facing a “lek” (or Booming Ground) which is an area where Prairie-Chickens gather to fight and perform their courtship displays and behaviors.  Dusty explained that a lek is usually in a meadow with short grasses; this particular lek has been used by Prairie-Chickens for many years.  Below is a picture of the lek in the early light – perhaps you can make out a couple of the Prairie-Chickens in it: 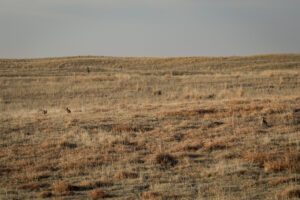 As our eyes adjusted to the low light we saw more and more Prairie-Chickens arriving at the lek.  Over the course of over two hours there we saw about 25 of them – almost all of them were male and perhaps 2 or 3 were female.  Below is a picture of a female: 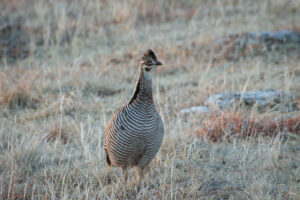 Although the females were interesting, the males came to the lek in an attempt to attract a mate and they were much more interesting to see.  Below is a typical male on display: 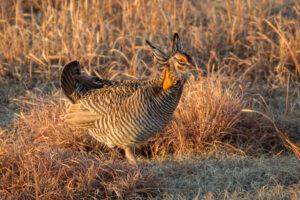 Note the head feathers which they can stand up or relax down behind his head.  The orange patch on the throat is a bladder which they inflate for show and then release, giving the “booming” sound described above.  Below is a series of 5 pictures which show a male as it extends its head feathers, inflates, deflates, inflates, then deflates its throat bladder.  The pictures were taken in just 12 seconds, showing how quickly the display lasts: 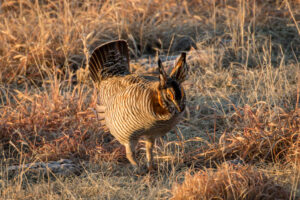 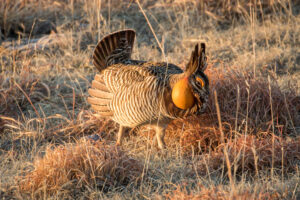 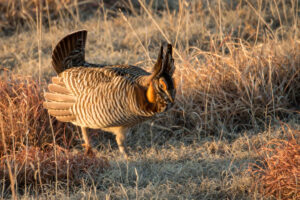 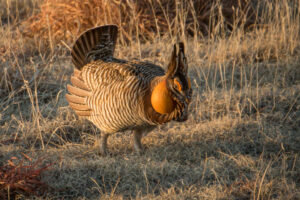 This occurred many times during the course of our time observing, as the males were trying to attract the attention of any females in the vicinity.  Fighting between the males also occurred regularly.  The males would fight each other in an attempt to show dominance and to secure the best area of the lek to put on their courtship displays (usually the center, where the females gather to watch).  Below are a couple of pictures of the fights: 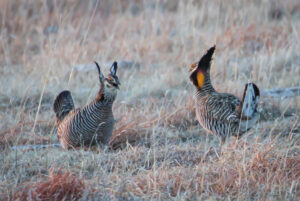 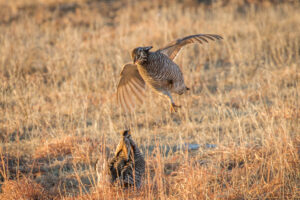 What an entertaining way to welcome the new day!  The Prairie-Chickens scattered when Dusty started up the bus and turned toward the farmyard, heading back to North Platte.  It was well worth setting our alarm for 4:45 AM to see the Prairie-Chickens do their courtship displays and fighting for dominance.

*This is one of three articles in a series about our bird watching experiences in the Nebraska Platte River basin – links to all of the articles are below:

Prairie-Chickens in the Platte River Basin

Those are all great shots! Thanks!