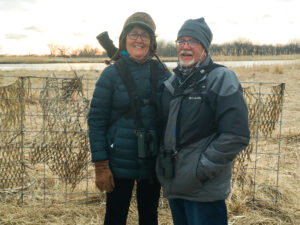 Note:  This is one of three articles in a series about our bird watching experiences in the Nebraska Platte River basin.  Links to all of the articles are at the bottom of the page.  Click on any bird picture and see additional information about the shot.

We arrived in North Platte, Nebraska the third week of March to witness the spring Sandhill Crane migration.  About 500,000-600,00 Sandhill Cranes have been migrating through this area for thousands of years.  If you would like to read more about why the Sandhill Cranes stop along the Platte River basin CLICK HERE.

Even though we saw lots of Sandhill Cranes in the fields driving in to North Platte we wanted a more intimate look at them and chose a tour-operator to take us out to observe the cranes as they come to the river at night to roost.  Several of the public blinds in the area were closed (due to COVID) and almost all of the property along the Platte River is privately held, so a tour operator is one way to get close to the cranes’ roosting sites.

We selected the Sandhill Crane View Blind, Evening Tour from Dusty Trails (there weren’t a lot of other choices*) and we thoroughly enjoyed the experience.  We checked-in with Dusty (in the black hat below) at 5:30 PM.  Before boarding I asked Dusty about their policy regarding masks – he said masks were “suggested.”  Let it be known that masks were not a priority in North Platte – no restaurant workers we saw wore a mask (although hotel employees did).  After some discussion amongst our group on whether to participate we did decide to board the rickety-looking old schoolbus. To my pleasant surprise the inside was clean and the upholstery was in pristine condition (I used to drive a school bus and I know how bad they can get).  Dusty even provided granola bars and bottle water. 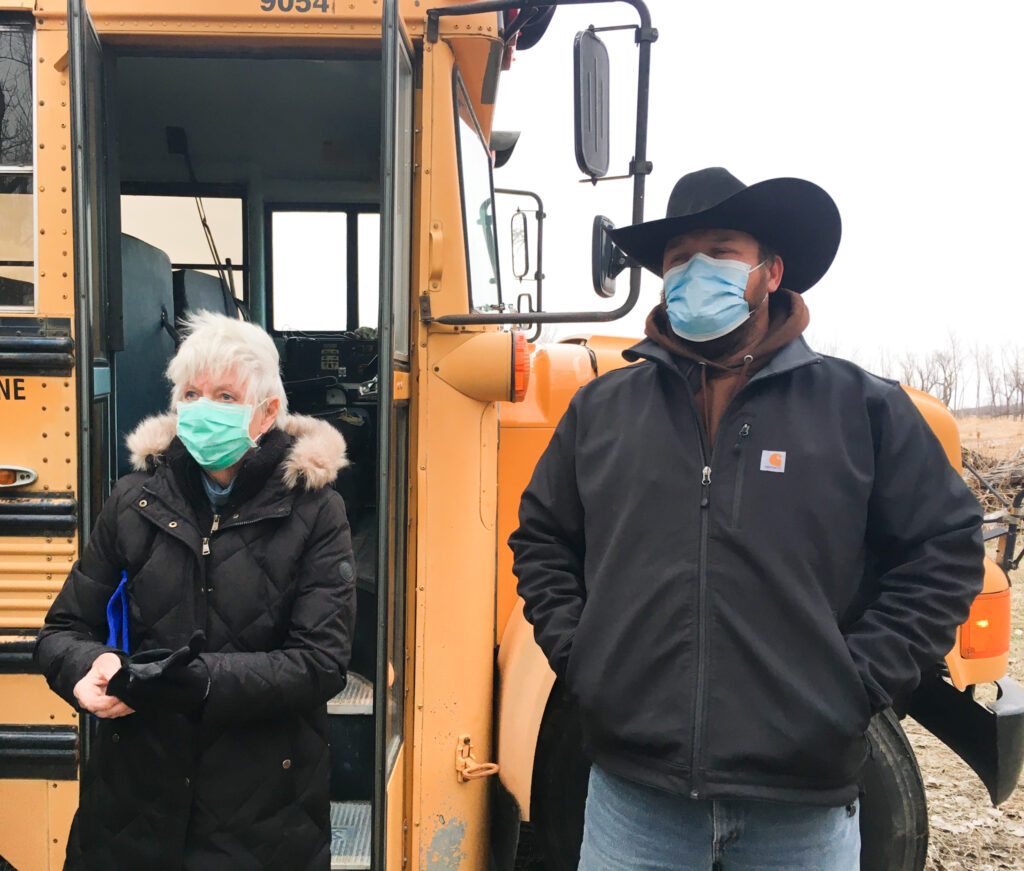 Most everyone on the bus did wear masks and, at our request, we separated on-site with mask wearers going to one blind and the mask-free went to the other blind.  To be clear, Dusty and his staff are not birders.  Dusty embraced the opportunity to put together this birding experience two years ago but their knowledge of Sandhill Cranes is limited to what they have seen and have learned through a little reading.  Other than Prairie Chickens (report on that coming soon) they didn’t know much about other birds in the area.

The sun was about to set before we left and I wondered why we were leaving so late and why our return time wasn’t until 9 PM – it was going to be pitch black by then!  Dusty soon explained; the Sandhill Cranes spend their time during the day feeding in the cornfields and then gather together after sunset to roost right in the Platte River (click the first link above to find out why they roost in the river).  That was our goal – to see them come in to roost.

After disembarking the bus we walked 300 yards toward the river.  About 30 yards from the river bank were these two identical blinds: 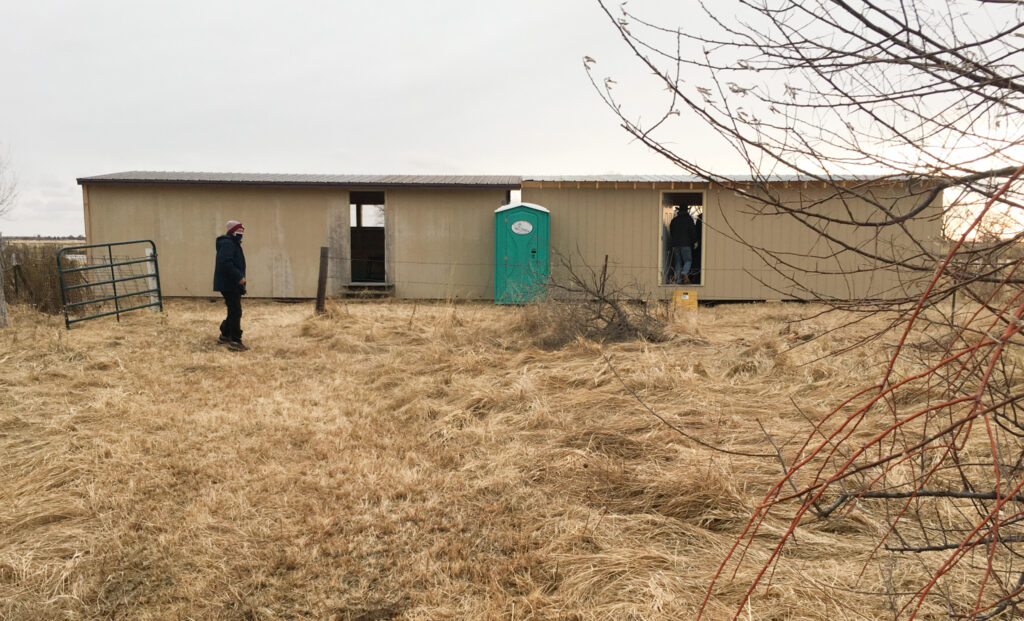 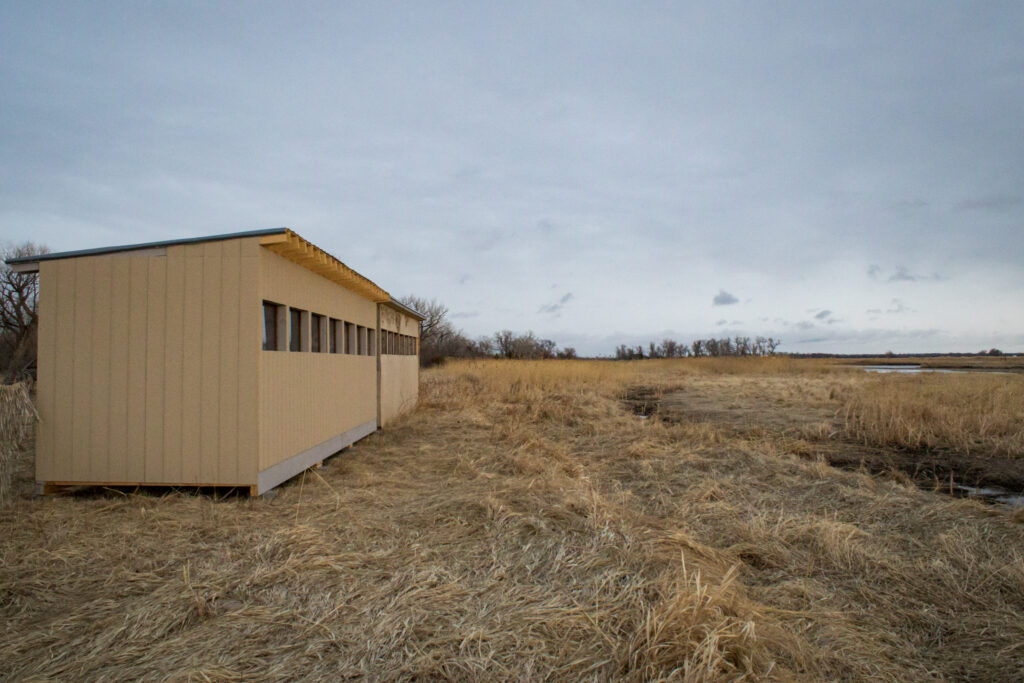 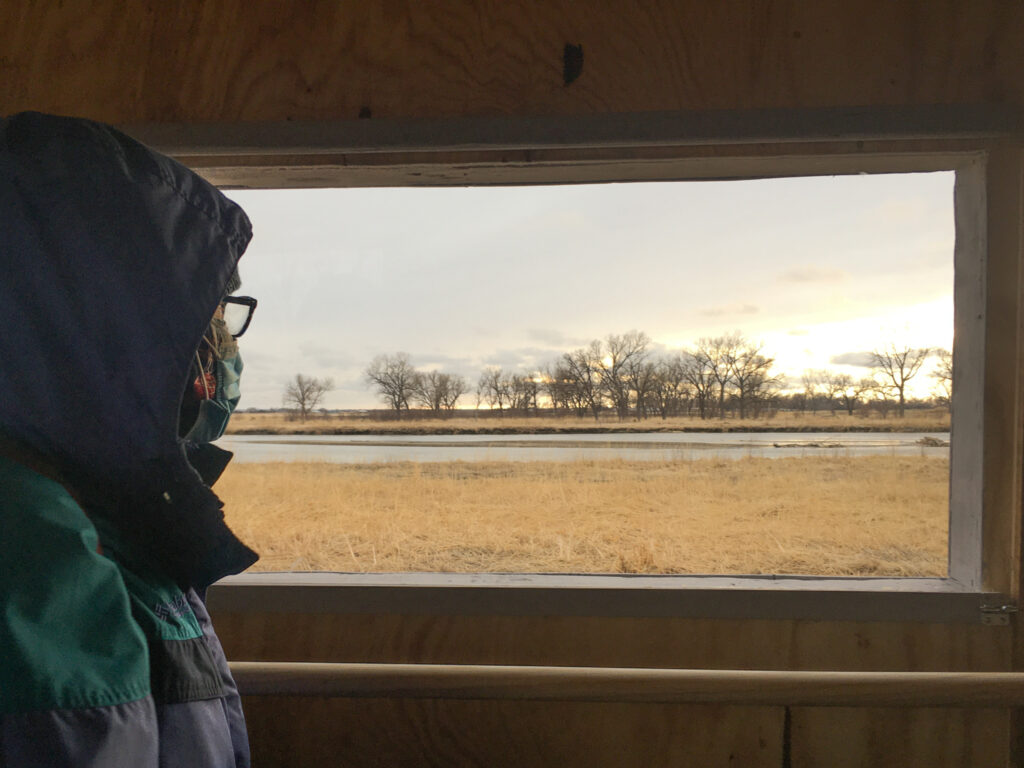 As you can see, each blind was a big plywood box with windows facing the river.  Stools were standing in front of the windows and folding chairs lined the opposite wall (but nobody wanted to sit), we were there to see the cranes!  The weather that day had been miserable, with rain and low gray clouds hanging over us the whole time.  To our amazement it cleared up just as we arrived and we were presented with this beautiful sunset: 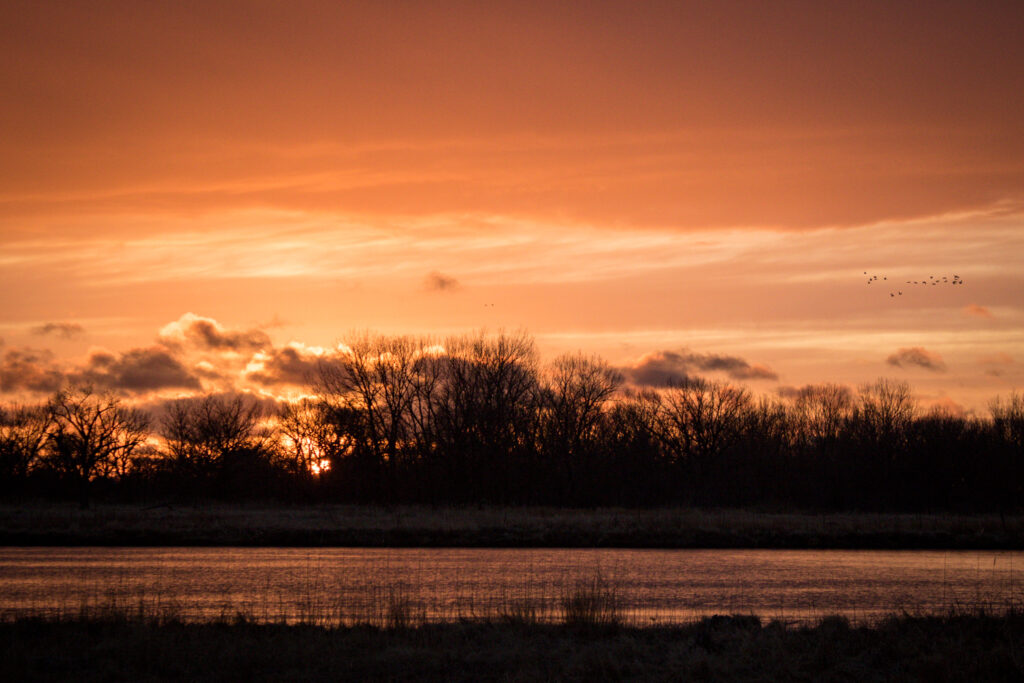 As the twilight dimmed we started to hear Sandhill Cranes off in the distance.  Far off on the horizon it looked like thin whifts of smoke rising up from the cornfields. 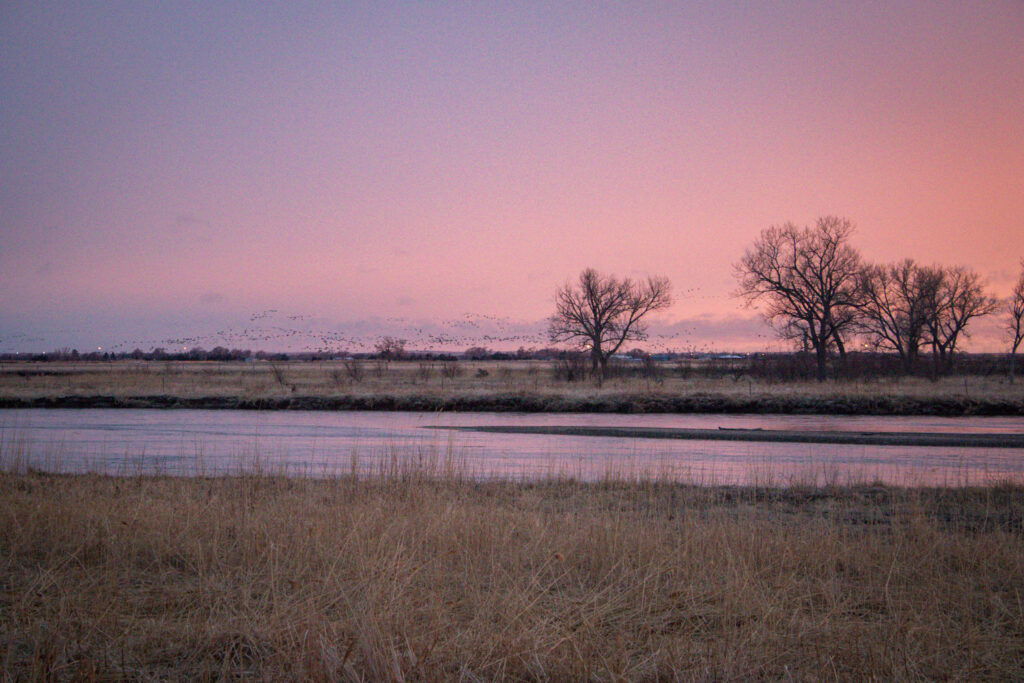 It was so far away it was hard to make out the individual cranes but there were enough to see groups of them swirl up and out from where they had been feeding. The later it got, the larger the whifts as the Sandhill Cranes gathered together and extended their numbers along the horizon.  It was past 8 o’clock when the first group of cranes flew near the blinds – there was still some light low in the sky but as you looked up higher the sky was almost black, so I’ll make no apologies for the poor quality of the pictures.

It’s hard to describe what happened next.  Great flocks of Sandhill Cranes would swoop above the river and then take off again (Dusty warned us it would seem like they would never land).  Back and forth they went – one large group going to the east of us, another to the west.  When I say “group” I mean hundreds, if not thousands of cranes flying and calling to each other.  They were just teasing us. 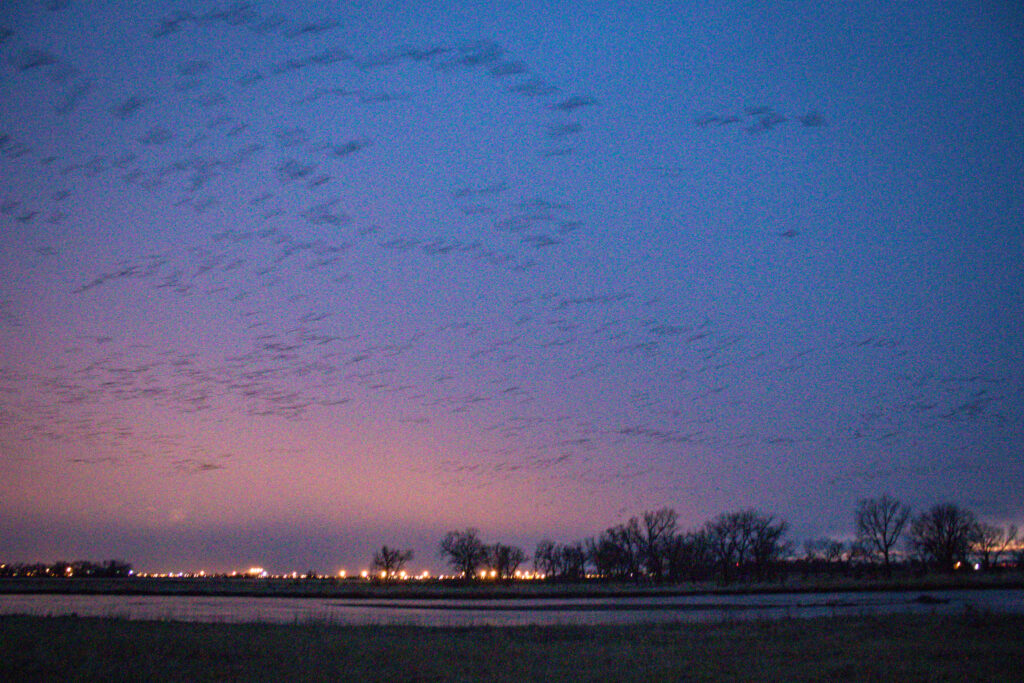 Suddenly, a group of 5,000 cranes were flying right at us 100 feet above the river.  There were so many of them that the noise surrounding the mass of cranes and the sight of them coming toward us both vied for our attention.  It was so riveting I forgot about my camera and binoculars and just let the sights and sounds wash over me.  It was impossible to hear a single crane calling; they joined together in one voice and the sound pounded down on us from above.  Just as the first vanguard of cranes reached the blind the group split, like the parting of the Red Sea in The Ten Commandments, half going left and half going right.  It took my breath away!  Never have I had such a close encounter with so many birds.

By now it was quite dark, and I hadn’t noticed any birds landing on the sand bar in front of the blinds.  I used my binoculars and scanned the river bed and, to my surprise, found about 300 of the cranes had actually landed nearby!  They were fairly quiet and it was hard to make anything out more than 300 dull gray blobs in the darkness.  Below is a USGS thermal infrared image of Sandhill Cranes roosting on the Platte River in the middle of night.  The hundreds of dark dots are the cranes standing on the river (white) and on a sandbar (lighter gray). 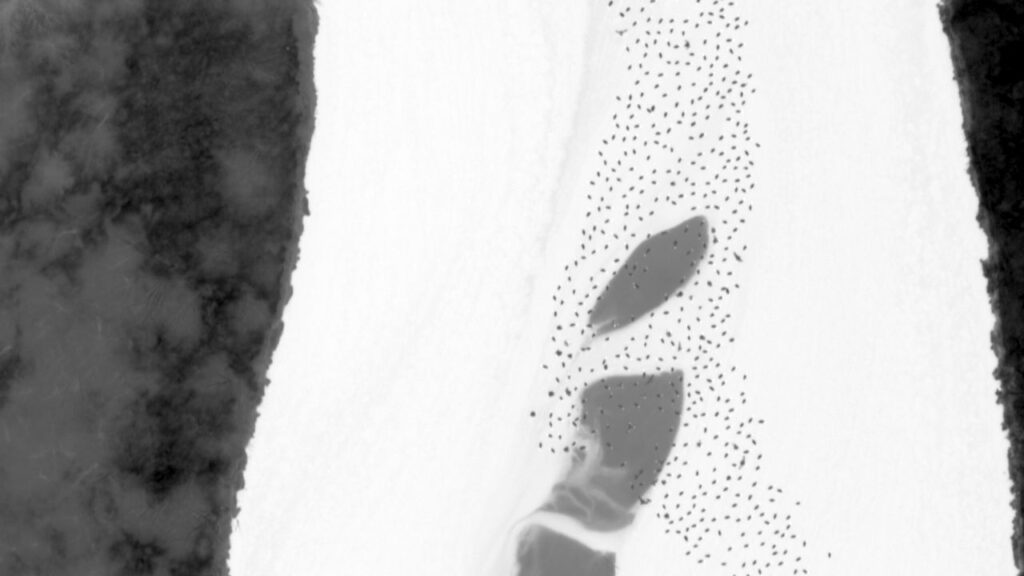 They started to quiet down around 9 PM so we carefully left the blinds and made our way through the night back to the bus.  On board, the excitement was high as everyone shared their experiences observing the cranes.  We chatted with each other on the short trip back to North Platte and thanked Dusty as we got off the bus for providing us with such an unique birding encounter.

Viewing Sandhill Cranes coming in to roost is a once-in-a-lifetime experience and I would highly recommend it.  The cranes can be found along the Platte River every year between mid-March through the first week of April.  Make the pilgrimage there – 600,000 Sandhill Cranes do!

* 100 miles east of North Platte is the small town of Kearny and just south of town is the Iain Nicolson Audubon Center at Rowe Sanctuary. The Visitor Center is currently closed (COVID) and the trails are only open from 10AM – 2 PM (to reduce the chance of disturbing cranes in the area).  They do have 3-hour evening tours to see the Sandhills roost but sign up early because they sell out fast.  We would have liked to spend some time there – perhaps next time.

If you would like to learn more about GreatBirdPics.com you can Click Here.  Members can post their own GreatBirdPics, make comments on other’s pics, and receive regular emails about bird photography.